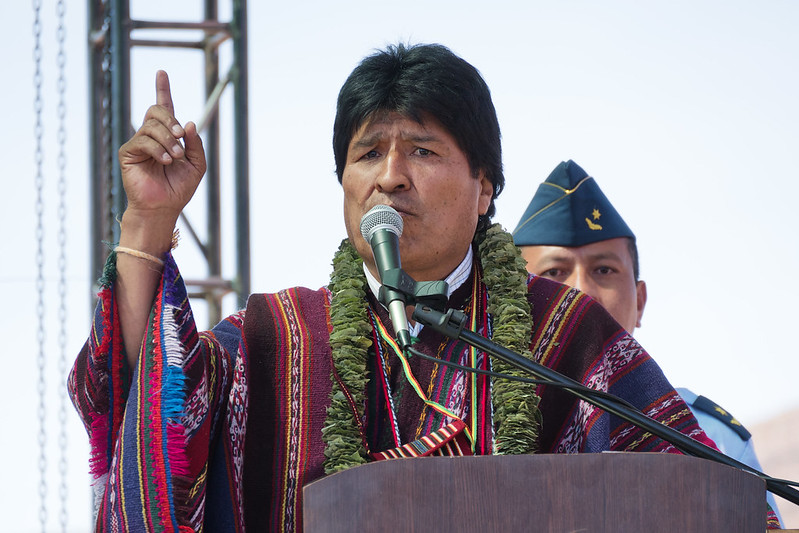 Scottish Government appeals for “democratic solution” in Bolivia, but offers no comment on whether it recognises the self-appointed interim presidency of Jeanine Añez

RESPONDING to the ongoing Bolivian crisis, the Scottish Government has appealed for a democratic solution but refused to say whether it recognises the self-declared ‘interim’ presidency of self-declared president Jeanine Añez as legitimate, or whether it considers Bolivian President Evo Morales’ removal from power as a coup d’etat.

However, the situation in the South American nation has prompted an emergency motion to be lodged in the Scottish Parliament, calling for solidarity with Morales and condemning intervention in Bolivia by the Organization of American states.

Earlier this month, Morales – the socialist populist who first took power in 2006 as Bolivia’s first indigenous president, and was re-elected earlier this year – was forced from office by the nation’s military, and has since left for exile in Mexico.

While Morales won a fourth term in October with a margin of victory of more than 10 per cent over his opponent Carlos Mesa, the Organisation of American States subsequently argued that the results of the election were manipulated, and called for new elections to be held.

Following this, Morales bowed to demands for fresh elections, but was forced to resign under pressure from the military, leading to widespread accusations of a coup d’etat.

“We agree with the calls from the international community for calm and for a democratic solution to be reached which respects the human rights of all Bolivians.” Scottish Government spokesperson

Añez said: “I assume the presidency immediately and will do everything necessary to pacify the country.”

The following day, as thousands of coca growers attempted to enter the city of Cochabamba in opposition to Morales’ removal, a military blockade resulted in the deaths of nine people, more than 30 injured and 169 arrested, according to early reports. This action led to an intervention from the Inter-American Commission on Human Rights (IACHR), which described the Bolivian military’s “excessive use of force.” As of today, mass-protests continue to descend upon Cochabamba.

Both the UK and United States governments have recognised the interim government. However, despite repeated questions from CommonSpace, the Scottish Government has offered no comment on whether it recognises the government of Añez as legitimate, or whether it considers Morales’ removal from power as a coup d’etat.

Instead, a Scottish Government spokesperson told CommonSpace: “We firmly believe in democracy as the means of resolving tensions.  We are concerned about the situation in Bolivia and the potential for violence to escalate.

“We agree with the calls from the international community for calm and for a democratic solution to be reached which respects the human rights of all Bolivians.”

“We have seen the imprisonment and now, thankfully, the release of reactionary events in Chile, the American influence in Venezuela, and these latest events in Bolivia, with the removal of an elected president. It should be condemned by democrats across the world.” Labour MSP Neil Findlay

The motion states: “That the Parliament views with deep concern the intervention by the high command of the Bolivian army in that country’s democracy and the resulting resignation of Evo Morales after his election as President in the recent elections when he received 47% of the vote with his nearest rival receiving 37%”.

The motion further calls upon MSPs to note that “the International Monetary Fund’s (IMF) recent report on the growth of Bolivia’s economy since Morales was first elected in 2006, which identifies it as having one of the highest growth rates in Latin America at 4.9% per annum and furthermore that the country’s 2018 growth rate remained one of the highest on the continent; understands that the IMF also reports that extreme poverty in Bolivia has been reduced by half over this period with a rapid extension of social and health provision on the basis of need to all Bolivians”.

Findlay’s motion “views the earlier intervention by the Washington-based Organization of American States in the internal affairs of Bolivia as gravely prejudicial to democracy across the Americas, and defends Evo Morales’ project to bring justice to the majority indigenous population of Bolivia, which it considers was previously denied basic citizenship rights” and “expresses its support for those in Bolivia who defend its democracy, and stands in solidarity with Evo Morales.”

Speaking to CommonSpace, Findlay commented: “This is the latest in a long line of very concerning developments on the South American continent.

“We have seen the imprisonment and now, thankfully, the release of Lula, reactionary events in Chile, the American influence in Venezuela, and these latest events in Bolivia, with the removal of an elected president.

“It should be condemned by democrats across the world.”

Speaking on behalf of the Scottish Venezuela Solidarity Campaign – which has previously been vocal in its condemnation of undemocratic attempts to remove left-wing South American governments from power – activist Keith Stoddart told CommonSpace: “The Scottish Venezuelan Solidarity Campaign  views with deep concern the intervention by the high command of Bolivian army in that country’s democracy and the forced resignation of Evo Morales, despite his election as President in the recent elections by 47 per cent of the vote as against 37 per cent for his nearest rival.

“Evo Morales worked tirelessly to redress the balance between the exploited and those who exploited not only its people but its resources. We urge all democratic organisations to continue to recognise his presidency and offer no legitimacy to those who serve the interests of big business.

“We welcome that the situation is being discussed in the Scottish Parliament but are disappointed at the bland and timorous response from the Scottish Government. To quote from their statement calling for a ‘democratic solution to be reached which respects the human rights of all Bolivians’ we would say that only a restoration of the Morales presidency would meet this ambition.”