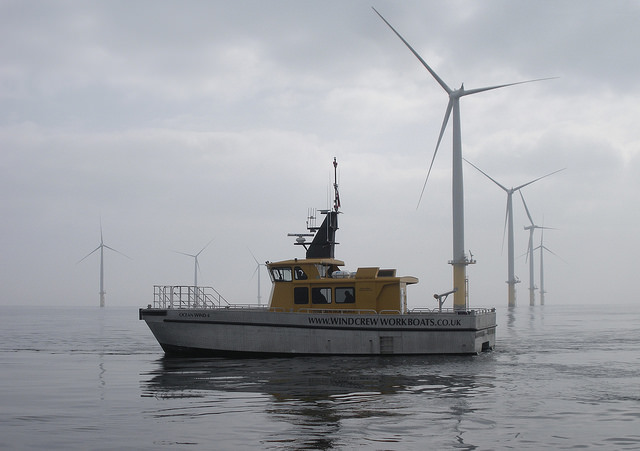 A study from the Fraser of Allander Institute indicates a new windfarm off the coast of Fife could boost employment, but the project faces legal challenge from RSPB

A NEW STUDY from the Fraser of Allander Institute has reported that the proposed Neart na Gaoithe (NnG) offshore windfarm project could support 2,000 jobs for every year of its estimated four-year construction, as well an average of 236 further jobs annually throughout the project’s lifespan.

Commissioned by Mainstream Renewable Power, the company planning to build the windfarm off the coast of Fife, the research also suggests that the project could produce £827.4m over the course of its operational duration – the equivalent of 0.6 per cent of Scotland’s GDP – as well as injecting almost £383m into the Scottish construction sector and £440.2m into the service industries.

“Our study shows that… there could be an impact on the Scottish economy over the 30 year lifetime of this project equivalent to 0.6 per cent of Scottish GDP in 2016.” Stuart McIntyre of the Fraser of Allander Institute

Quoted on the energy sector news and analysis website Energy Voice, Stuart McIntyre of the Fraser of Allander Institute said: “This study investigated the wider economic impacts on the Scottish economy of Mainstream Renewable Power’s anticipated expenditure on the NnG project.

“Our study shows that, based on information provided to us about the expected size of this project and the anticipated spend within Scotland, there could be an impact on the Scottish economy over the 30 year lifetime of this project equivalent to 0.6 per cent of Scottish GDP in 2016.”

Andy Kinsella, Mainstream’s chief operation officer, was also quoted by Energy Voice as saying: “The study confirms that NnG will support the creation or retention of large numbers of high skilled, high quality jobs in Scotland during construction and its 25 year operational lifetime.”

However, the NnG project has been challenged by the Royal Society for the Protection of Birds (RSPB), which maintains that the windfarm could lead to major declines in the gannet, puffin and kittiwake populations in the surrounding areas.

“We continue to support the development of carefully sited and designed renewables, including offshore wind. However, this must not be at the cost of the environment they are intended to protect.” RSPB

In 2014, following the 2009 release of several sites within Scottish Territorial Waters, developments were consented by the Scottish Government for 335 turbines across four major wind farms in the Firth of Forth and the Firth of Tay, including those intended for the proposed NnG project.

The RSPB made their initial legal challenge to the decision in January 2015, which the upheld in July 2016, with Lord Stewart judging that the consents were unlawful on multiple grounds. However, Scottish ministers and wind developers appealed against this, and the decision was overturned in May of this year by the Inner House of the Court of Session.

Earlier this month, the RSPB applied directly to the UK Supreme Court for permission to appeal against the Inner House’s decision.

A statement on the RSPB’s website said: “The vast majority of renewable energy developments pose no significant threat to birds or other wildlife. We continue to support the development of carefully sited and designed renewables, including offshore wind. However, this must not be at the cost of the environment they are intended to protect so individual developments must be sited to avoid significant harm.”