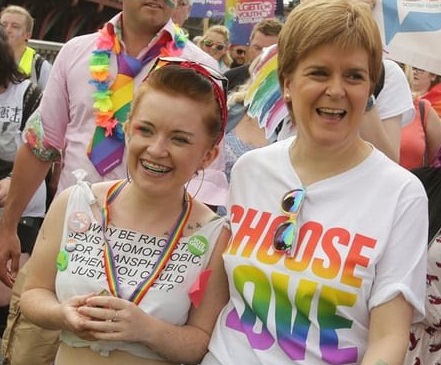 Olivia McMahon (pictured above) writes about her experience of coming out as gay in the second year of secondary school, being bullied and feeling like school education was biased against her inducing anxiety, to being inspired by the TIE campaign to become an activist for LGBT-inclusive education, and what still needs to be done to change things

IF I HAD been told five years ago that I would be marching at the front of the Glasgow Pride parade with First Minister Nicola Sturgeon, and campaigning for LGBT-inclusive education in Scotland’s schools, I would never have believed it.

Leading the parade with our First Minister was the best day of my life and it has only fuelled my passion to make sure that no young person in Scotland has to endure what I, and so many others like me, had to in our time at school.

For most of my childhood I had battled with my mental health, and with bullying at school. When I came out as gay in 2013, I had just entered into my second year of secondary school, and it wasn’t long before vicious gossip and rumours were spread about me.

I was not only dealing with undiagnosed Attention Deficit Hyperactivity Disorder (which wasn’t diagnosed until I left education) but now also the reaction of those around me after I came out. I was laughed at, gossiped about, had things thrown at me, was called various names and none of the girls in my year would come near me.

The school’s changing rooms quickly became my worst nightmare. I was in a corner by myself whilst the other girls would hide themselves, ignore me, and glare with disapproving eyes. Our Personal and Social Education (PSE) class was also a particular anxiety inducing hour for me, as I was never taught anything that I needed to know. Everything was discussed with a heterosexual bias and it made me feel even more ‘abnormal’.

As my confidence began to grow, though, so did my voice. I questioned my Guidance teacher at the time: “why is there no mention of LGBT seuxal health or even sexual relationships?” and the reply that I received was that there just wasn’t the training or resources to teach about same-sex relationships yet.

That just reiterated the feeling that I was not normal – because if I was, my identity and my relationships would be taught – or at least mentioned. I continued to question my teachers about LGBT-inclusive education; if we were in class having discussions about relationships and the teacher would use heteronormative language, I would raise my hand and remind them about the LGBT community.

Thankfully by around 2016, attitudes in my school began to change. Same-sex relationships and LGBT-inclusive sexual health began to be discussed in my PSE classes. My teachers were not equipped with a lot of information or training at that point – but at least it was a start. Then the rainbow gay pride flags and Stonewall posters began to appear on classroom walls, in corridors, and my school were beginning to take a zero tolerance approach to homophobic, biphobic and transphobic bullying.

All of this came too late for me though, as the damage was already done by then, but I did feel relieved that future generations of LGBT young people coming through my school would be at a greater and safer advantage.

For three years I have been a strong supporter of the Time For Inclusive Education (TIE) campaign, and even more so as one of the group’s co-founders also used to attend my high school.

READ MORE – Liam Stevenson: 4 years ago I got involved in the Yes campaign – it changed my life for good

The work that they have been doing, in lobbying for LGBT-inclusive education in all schools, has had a life altering impact on many young people. I knew that I had to be involved in this campaign somehow, as this was all I had wished for while I was in secondary school.

If TIE had existed back in 2012, I know for sure that I would’ve had more hope for knowing that people were fighting my corner and acknowledging the homophobia, biphobia, and transphobia happening in schools around the country.

The campaign has brought the issues facing LGBT youth in education to the forefront of the national agenda, and with strong political figures such as our First Minister Nicola Sturgeon, Scottish Greens Co-Convener Patrick Harvie and celebrities such as actress Emma Thompson supporting them, it has also brought hope to the young minds of today.

For those LGBT kids going through some of the most horrendous experiences, the support for TIE has shown that there is hope and that there are people who care and who are willing to fight for them. We will not stop until every young person in Scotland is safe in school and included equally  in all aspects of their education. Education is the most important place to start in changing attitudes.

A report released by TIE in 2016 shows just how important it is to continue in our work. 90 per cent of LGBT people have experienced homophobia, biphobia and transphobia at school, whilst 64 per cent have been directly bullied because of their sexual orientation or gender identity.

The picture is not much brighter when it comes to teachers. 80 per cent of them do not feel that they have been adequately trained on how to tackle homophobia, biphobia and transphobia, despite 87 per cent reporting that they regularly hear homophobic, biphobic or transphobic language at school.

The TIE Campaign marks the beginning of a long road towards LGBT-inclusive education in all of our schools. We need funding, we need more political figures on board, we need LGBT people from everywhere sharing our message of hope, equality and change.

We also need an improved youth mental health service to deal with the growing epidemic of mental health issues experienced by young people today. We need allies who are not frm the LGBT community to look out for their peers, and we need teachers to be willing to change their style of teaching to ensure that they are LGBT inclusive, in order to adequately support all of the young people in their care.

Picture courtesy of the TIE campaign