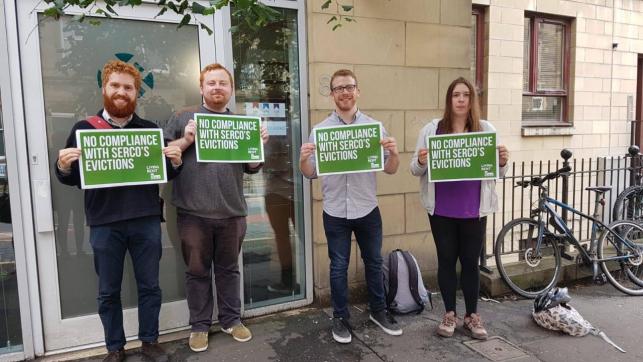 TENANTS’ union Living Rent has called for mass public resistance in Glasgow to stop the eviction of 300 asylum seekers, which is set to begin today [17 June].

The outsourcing giant Serco announced last week that it was re-commencing the eviction of asylum seekers who have had their requests for asylum rejected by the Home Office. The lock changes were suspended in July last year following a legal challenge and concerted campaigning efforts from Living Rent and others.

Serco have stated that they plan to evict 30 people per week with the evictions starting this week, and in a statement Living Rent said they would be resisting the lock changes “by any means necessary”.

“Living Rent is committed to resisting this policy of forced destitution by any means necessary. As a union of tenants, we are ready to go on the offensive to defend our neighbours and our communities. It is up to the courts, Glasgow City Council and the Scottish Government to decide where they stand, and back up words with real action. Our position is clear,” the union stated.

In May, a judge ruled that it would not be illegal to evict the asylum seekers, after a legal challenge by Govan Law Centre which it has since appealed. Mike Dailly, solicitor advocate of Govan Law Centre, said in the Sunday National yesterday that he still believed the evictions are illegal and would be prepared to oppose any eviction attempt in the courts.

Dailly said: “Govan Law Centre stands ready to make applications for interim interdict for anyone subject to a lock-change eviction in Glasgow as we believe these are unlawful, and pending our client’s appeal to the Inner House of the Court of Session, Scots law is unsettled here.”

In their statement announcing the re-starting of the lock changes, Serco claimed “that most of these people have exhausted all avenues of appeal and no longer have the right to remain in the UK”, but this was rejected by Robina Qureshi, director of Positive Action in Housing, who said “out of 1600 people who were destitute, 92 per cent were working to address their legal position. Very few were appeal rights exhausted. Yet Serco is telling them that they should simply return home. It has no right to say that as their landlord.”

Living Rent added that as part of its resistance efforts it would be “targeting” the “business interests” of Serco and the company which is set to take over the asylum accommodation contracts in September, Mears Group. The union claim Mears Group has refused to take responsibility for the properties of the 300 asylum seekers facing eviction.

READ MORE: ‘I am only Rahman from camp number 16’: The story of a ‘citizen of nowhere’ on hunger strike to keep the Serco wolves from the door

David Hanson, from Living Rent, said: “It’s abhorrent that SERCO is still continuing these evictions despite our successful efforts last summer in stopping them by pressuring politicians, landlords, and housing associations. The fact that the Mears Group won’t house these 300 asylum seekers makes them just as culpable as SERCO.”

CommonSpace asked Mears Group to confirm whether it was opposed to taking charge of the 300 properties when it’s contract begins.

A spokesperson for Mears Group responded: “Mears will become responsible for housing eligible asylum seekers from September 2019. The current issues regarding ineligible asylum seekers are matters for the Home Office and the current contractor to address. Mears are currently engaging with all landlords and our objective is to retain all existing stock where possible.”

Glasgow City Council leader Susan Aitken has warned the UK Government that they could withdraw from the Home Office asylum seeker dispersal scheme if the lock changes are not stopped. The Home Office have refused to comment on the Serco evictions.