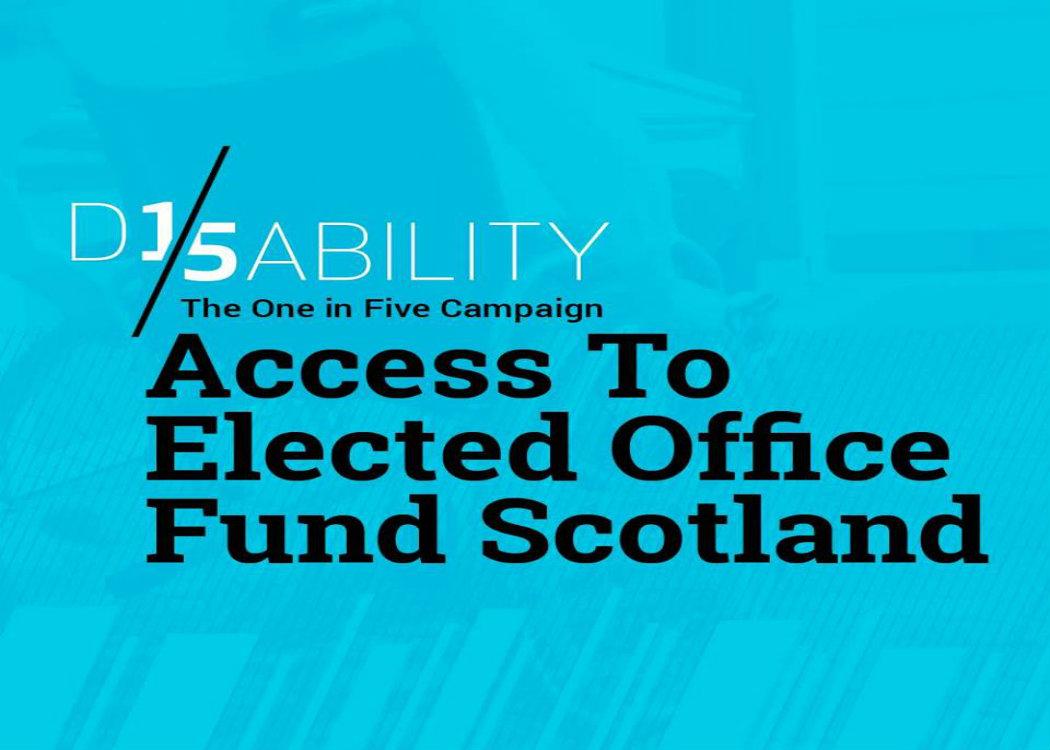 THE ONE IN FIVE campaign, a cross party drive to increase the political participation of disabled people in Scotland, has put pressure on politicians and the Scottish Government to gain access to elected office fund to encourage disabled people to run for parliament.

As the 2016 Holyrood election draws closer and the candidate selection gets underway, the One in Five campaign has called for the creation of an Access to Elected Office Fund Scotland (AEOFS). The aim of the AEOFS is to support disabled people to seek and gain elected office positions as it removes the financial barriers associated to disability that they would otherwise face, from transport costs to accessible information.

Earlier on in the year , all six major parties endorsed One in Five’s five-point charter.

This charter requests that all members ask about individual needs to ensure inclusion, meetings are held in accessible venues, material is made available in a variety of formats and that organisational tasks should be made flexible enough to empower individual member ability. It also asks that organisational aims should increase awareness of issues affecting disabled people and strives to include and empower all members.

Pam Duncan-Glancy, a Labour Party activist and ambassador for the One in Five campaign stated: “Very often, disabled people don’t even get close to politics, sometimes they can’t even get through the door of a local campaign meeting. That’s why the One in Five charter is so important – it is one other step along the way to the political empowerment of disabled people”

Jamie Szymkowiak, an SNP activist and founder of the One in Five campaign added: “The Access to Elected Office Fund in Scotland is about equality. There is a new and vibrant thirst to play a part in democracy in Scotland and we want every disabled person, no matter which political party the support, to have the opportunity to participate. Our elected officials do not represent our society and some disabled people need support to become Councillors, MSPs and MPs. Scotland has the chance to lead the way – to better the now dormant UK fund – it shouldn’t about the money, it’s about doing what is right.”

The One in Five campaign met with Marco Biagi and Jo Fitzpatrick on Friday 7 August to discuss the methods of facilitating an interim fund for the 2016 Holyrood elections before implementing a more sustainable support system.

Speaking with CommonSpace, Szymkowiak stated: “[The meeting] was really constructive. The Scottish Government has made a commitment to look into the viability of setting up an interim fund for the 2016 election.

“This is about the immediate delivery of equality, which requires immediate action. The fact that they are going to look into an interim fund is a very positive development. The Scottish Government needs to ensure that the finances are available for the establishment of an interim fund, and that there is a body that can facilitate this. Different impairments face different challenges, some might require more funding so a panel needs to be able to quickly asses this.”

On the matter of the next steps of the campaign, Szymkowiak added:”We have been in touch with a broad range of UK MPs from a variety of political parties in the hope of bringing the one in five campaign to a UK level.”

Picture courtesy of One in Five