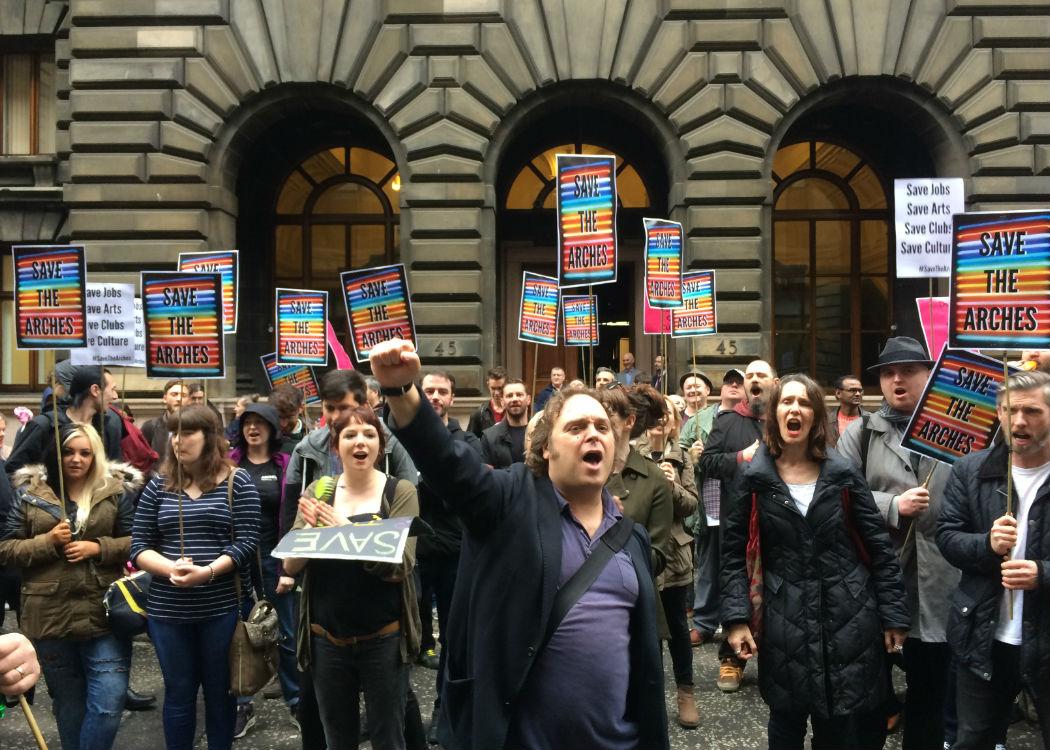 AS THE lights in a club go up, ‘one more tune’ is a familiar chant to dance music lovers in Glasgow and beyond. It is the cry of those caught in a moment, desperate for the party to go on just that little bit longer.

At the Save the Arches protest outside Glasgow City Council offices on a dreich Friday morning, the chant seemed to hold a resonance greater than ever.

There gathered well-kent faces from city’s arts and theatre talent alongside regular attendees at the venue’s clubs nights.

Scattered among the crowd of a hundred or so were some of the 129 staff made redundant earlier this month as the Arches plunged into administration. The sense of shock among everyone present remained palpable.

The protesters assembled outside a meeting of the city council’s licensing board, the body which made the decision last month to revoke the club’s late night license.

The decision was taken following a request from Police Scotland, after a series of drug-related incidents were reported at the venue.

As the venue uses income from nights featuring some of the world’s top DJs to fund a packed creative programme, the knock-on effect for the institution has been devastating and ultimately led to its closure.

Among those at the protest was actor and theatre director Cora Bissett who, like many in Scottish theatre, began her career making shows at The Arches.

“It’s absolutely appalling that it’s getting shut down,” Bissett told CommonSpace. “It’s such a jewel in the city’s artistic life.”

“We’re going to lose that because artists somewhere to bed and grow up. You don’t just appear from nowhere.

“It’s the wastefulness and no one can understand the sense of it. There’s got to be some other agenda. We all know this is not going to solve the drugs problem. It’s an imbecilic cure for it.”

A petition urging the licensing board to reinstate the Arches license has garned nearly 40,000 signatures.

Another vocal opponent of the venue’s closure has been performer and writer Kieran Hurley.

To much applause from the crowd, he urged a rethink from the licensing board on its decision to close down the club following Police Scotland’s request.

“The licensing board needs to do the sensible and courageous thing, which surely it would be applauded for, which is to acknowledge its mistake and reinstate the Arches’ license,” said Hurley.

The protest was a coming together of those who enjoy everything that the Arches had to offer, representing the venue’s diverse programme.

“Something that hasn’t been reported in the media is that there is a lot of crossover between people who to go club nights and will go to other cultural stuff in the venue as well,” said Neil Fleming.

“It’s an institution not just for Glasgow but known all around the world.

“There’s a huge case of double standards. McDonald’s round the corner from the Arches has had more police incidents but there doesn’t seem to be any action taken against it.

“I think it’s a really short-sighted move by the council.”

The campaign to reverse the decision was dealt a blow this week after MSPs voted down Green MSP Patrick Harvie’s attempt to amend Holyrood’s Licensing Bill.

Harvie sought to add “promoting social and cultural life” to Licensing Objectives and implement a consideration of the impact of decisions on a Licensing Board’s whole area when reviewing a venue’s license, however this was rejected by MSPs.

However, at the protest there was an air of defiance among those gathered together in the Glasgow rain and the participants pledged to return in greater numbers than before as they continue the cry for ‘one more tune’.