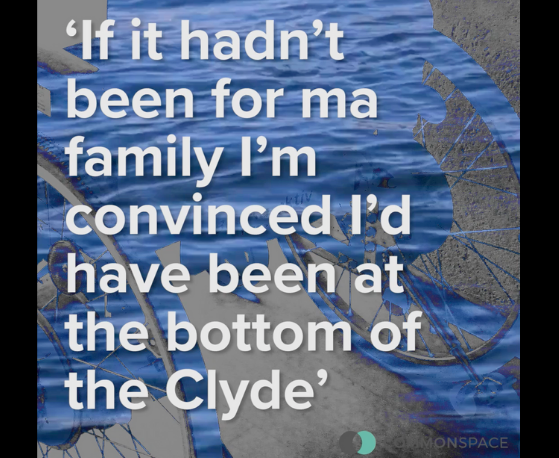 Sean Cudden, a Masters student and welfare rights activist, presents the first of a three part of series of one person’s journey through the benefits system based an interview with benefit claimant Anne from Glasgow, who’s harrowing story is told in her words

THE following testimony which will be presented in three parts followed by an analysis of the wider issues comes from an interview conducted as part of my research for an MSc dissertation on the subject: “Have recent changes to the UK benefits system had an impact on the self-reported health and well-being of benefit claimants with a disability or chronic health condition?”

Anne’s interview was one of several I conducted with benefit claimants and people who work in the welfare rights field. The interview is about Anne’s lived experience of the benefits system, how that system has changed in recent years and how she feels it has impacted on her health.

Part 1 – The beginning: ‘If it hadn’t been for ma family I’m convinced I’d have been at the bottom of the Clyde’

I had my accident in 2004. I was on high rate Disability Living Allowance (DLA). So I went back to work within six months of my accident. So I was working and I was on high rate DLA. That allowed me to keep ma job because I had to pay people to do everything for me. I’d say to folk ‘it’s great, it’s like bein’ a man!’ Aw I did was go to work [laughs]. Magic. But honestly I had to pay folk to get ma shoppin’, like clean ma hoose, obviously…I was really really in a bad shape. I could do very little.

[The benefits system] was very supportive and that’s what I always like to get across to people. That despite the fact I was on high rate care and high rate mobility I was still paying more into the system in taxes than what I was takin’ oot of it. So to me the social security system was working. ‘Cause I was still able to go oot and pay ma taxes and aw that and everything was fine and then in 2006 I went to a DLA hearing and they basically removed all of my benefits and I’m almost convinced that despite the fact that DLA is a non-means tested disability benefit – this is my honest truth and experience – that the woman who was obviously like the head of the panel, when I said I was workin’ she went “What!” and literally took a pen and scored through [my name] as if to say: “If you’re working you should nae be getting benefits”. It was like the person who was the head of the panel did not understand the nature of the benefit that she was administering.

When I lost all of that benefit I was still trying tae work, keep a hoose and do everything that able bodied people do. This resulted in complete mental breakdown. It also worsened ma physical condition. Well really it was the worsening of my physical condition that inevitably drove me to complete mental breakdown. Because I was so desperately wantin’ to haud on tae ma job that I was doin’ anything and everything that I could but because ma health was deteriorating aw the time I was havin’ longer and longer periods off on sick [leave]. And that’s when in 2008 eventually Glasgow City Council paid me off.

So when I lost ma job in 2008 I applied for Income Support and Housing Benefit. I was still on the low rate DLA. It took the Department a’ Work and Pensions eight months to sort ma money out. If it hadn’t been for ma family I’m convinced I’d have been at the bottom of the Clyde. Because losin’ ma job was the lowest point in my life. It was the one thing I had strived so hard [for]; you know I’m dyslexic, and so the years that I spent at university were really hard work. You know folk have got this idea o’ students aw sittin’ aboot getting’ drunk. I was in the library at 9am in the morning. If I wisnae in class I was in the library until 7pm  at night. Plus I was workin’ as well so you know I worked really really hard. And I was really good at ma job. The truth of the matter is when I lost ma job I went home and stayed in for four years.  You know?

So as I say it was eight months of just sheer terror. That’s the only way I can describe it. I was getting’ letters fae Glasgow City Council saying “you owe us £500 in rent” because somewhere somebody hud nae ticked a box. I kept havin’ to apply for emergency payments. Because they just were losing everything that I sent. It was just chaos. It was just constant chaos. Everything you sent them got lost. Eventually after the eight months they gave me £75 compensation. Like on top ae all the money that they owed me because eventually somebody phoned me fae somewhere going: “This is absolutely horrific what’s been happening to you. We are sorting it out today.” And from then on they did and it fell into place.