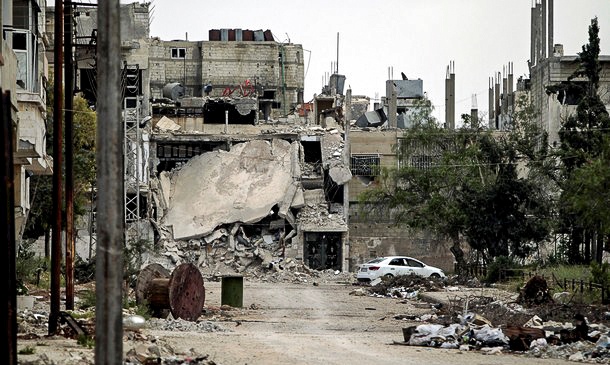 JUST 22 per cent of Britons support the UK Government’s plans to begin missile strikes on Syria, a YouGov poll has found.

Commissioned by The Times newspaper, a new poll shows support for UK airstrikes against Syria is down by two points from 25 per cent in 2013, when MPs voted against military intervention in the ongoing civil war. 43 per cent of voters now say they oppose airstrikes, while 34 per cent say they ”don’t know”.

Prime Minister Theresa May will meet with cabinet ministers today to seek their approval to go ahead with the strikes, and is expected to bypass the House of Commons entirely.

This follows from an attack on the rebel-held Syrian town of Douma over the weekend which reportedly involved the use of chemical gas, alleged to have been used by Syrian government forces and roundly denied by the Syrian regime.

The World Health Organisation (WHO) reported that around 500 patients during the incident showed “signs and symptoms consistent with exposure to toxic chemicals”.

US President Donald Trump responded by promising to respond “forcefully”, a position shared by French President Emmanual Macron who said that action would be taken if chemical gas had been used and that he was working with the UK and USA to “define our reaction, which will occurr in the coming days”.

Opposition parties, along with a number of Tory MPs, have called for a parliamentary vote on the issue and urged caution to avoid escalating the conflict. Labour leader Jeremy Corbyn warned that “more war will not save life. It will just take more lives and spawn the war elsewhere”.

Writing to the prime minister on Wednesday, SNP defence spokesperson Stewart McDonald said: “Undoubtedly the use of chemical weapons cannot be allowed to become normal, but there are options open to the UK Government that do not involve the use of lethal force, and would not require UK forces to deepen our military role in an already extremely complex theatre of war.

“I am not convinced that the retaliatory airstrikes being proposed by the United States is the way forward. Though should the UK government wish to participate then it must only do so if the UK parliament gives its consent.”

The office of Syrian President Bashar al-Assad has condemned the potential military intervention, tweeting on Thursday morning that “the threats of some Western countries to attack Syria is based on lies that these countries fabricated along with terrorist organisations”.

READ MORE: Beyond bombing: 5 things you need to know about the Syrian conflict

This view has been supported by Russia, which has thousands of military personnel stationed in Syria and warned that US airstrikes could lead to a direct conflict between the US and Russia.

Russian foreign ministry spokesperson Maria Zakharova also suggested that Western governments may be seeking “to quickly remove the traces of the provocation” with the proposed airstrikes, so that “international inspectors will have nothing to look for in terms of evidence”.

The Times poll showed that 61 per cent of UK voters believe that “there probably was a chemical weapons attack carried out by Syrian government forces or their allies”, while 29 per cent didn’t know. Five per cent thought “something else happened”, and a further five per cent felt “there was probably not an attack, and the claims are fabrications”.

President Trump has continued to tweet on the issue, providing somewhat mixed messages on US intentions. On Wednesday, he said: “Russia vows to shoot down any and all missiles fired at Syria. Get ready Russia, because they will be coming, nice and new and “smart!” You shouldn’t be partners with a Gas Killing Animal who kills his people and enjoys it!

“Our relationship with Russia is worse now than it has ever been, and that includes the Cold War. There is no reason for this. Russia needs us to help with their economy, something that would be very easy to do, and we need all nations to work together. Stop the arms race?”

However, by Thursday morning, he appeared to backtrack, stating: “Never said when an attack on Syria would take place. Could be very soon or not so soon at all! In any event, the United States, under my Administration, has done a great job of ridding the region of ISIS. Where is our ‘Thank you America?’”