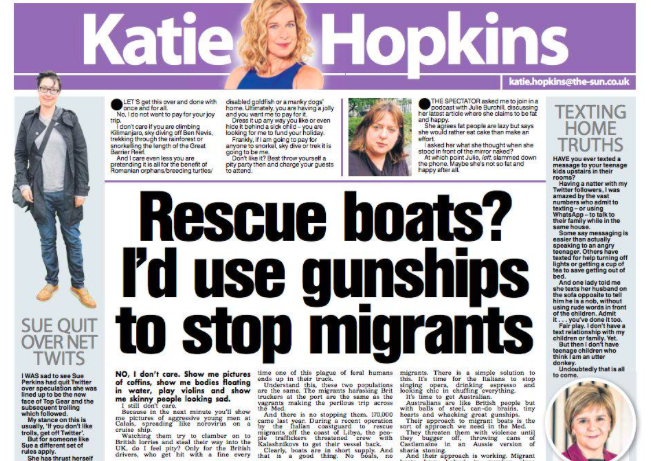 50 POLITICIANS, anti-racist campaigners, journalists, civic society groups and other prominent figures have written an open letter to IPSO, the media regulator, demanding that it takes action on racism in the press.

“Racist and faith-based attacks against communities are so common in parts of the press that they have become a dangerous normality. It is clear that these attacks encourage the discrimination, harassment and violence suffered by members of minority communities every day.

READ MORE: In a climate of surveillance, does self-censorship threaten Scottish journalism?

“Yet you have taken no action. In respect of each of the examples cited in this letter, you have not upheld a single complaint. In one entire year, of over 8000 discrimination complaints, you upheld only one.

“By allowing these abuses to go on without sanction you are turning a blind eye to the continuing incitement of hatred.

“We write to express our deep dismay and to ask you to address this problem urgently and publicly. While the press must be free to do its job, your implicit condoning of religious and race-based hate must stop.”

IPSO chairman Sir Alan Moses responded, stating: “IPSO rejects the accusation that it condones religious and race-based hate or in any way approves of offensive attacks on groups on the grounds of their beliefs or identity.

“Our decisions on discrimination and accuracy make it clear that a finding that there has been no breach of the Editors’ Code does not in any way imply that IPSO approves of what has been written.

READ MORE: Anthony Fletcher: How the Daily Record lied about me – and didn’t get away with it

“The real issue, with which the letter fails to grapple, is how to strike a balance between the freedom of a journalist or newspaper to offend a group while protecting individuals.”

“We work every day to make these difficult judgments; we seek to maintain the balance between freedom of expression and protecting the public.

“A solution to the important problems of where and how the line is to be drawn is not going to be found by the misleading and distorted picture of IPSO’s work, particularly in the misuse of statistics.”

Hacked Off’s Executive Director Kyle Taylor said it was “deeply worrying” that Moses “imples they have absolutely no control or influence over the code they are empowered to enforce”.

Taylor stated: “It is upsetting that Sir Alan believes “the real issue” is “how to strike a balance between the freedom of a journalist or newspaper to offend a group while protecting individuals.”

“The real issue is that IPSO seems to think this is the balance that needs to be struck! It’s simple: don’t be racist, Islamophobic, anti-Semitic or discriminatory of an entire group of people. Is IPSO suggesting that journalists and newspapers are somehow incapable of writing stories or opinion without offending a group?

“We believe strongly in a free, thriving press and have defended journalists striking over pay and conditions. Still, we believe in the right for all in society to speak freely. This is an extension of free speech not an attack on it. We are merely asking IPSO to grant marginalised communities the right to make complaints on the basis of group discrimination.

“It is also deeply worrying that Sir Alan implies they have absolutely no control or influence over the code they are empowered to enforce. If that is truly the case – and IPSO believes they’re hamstrung by this – then we welcome their joining us in our campaign to change the Editors’ Code by which they are bound.”

You can add your support for the open letter by tweeting #Racisminthepress and signing the petition here.