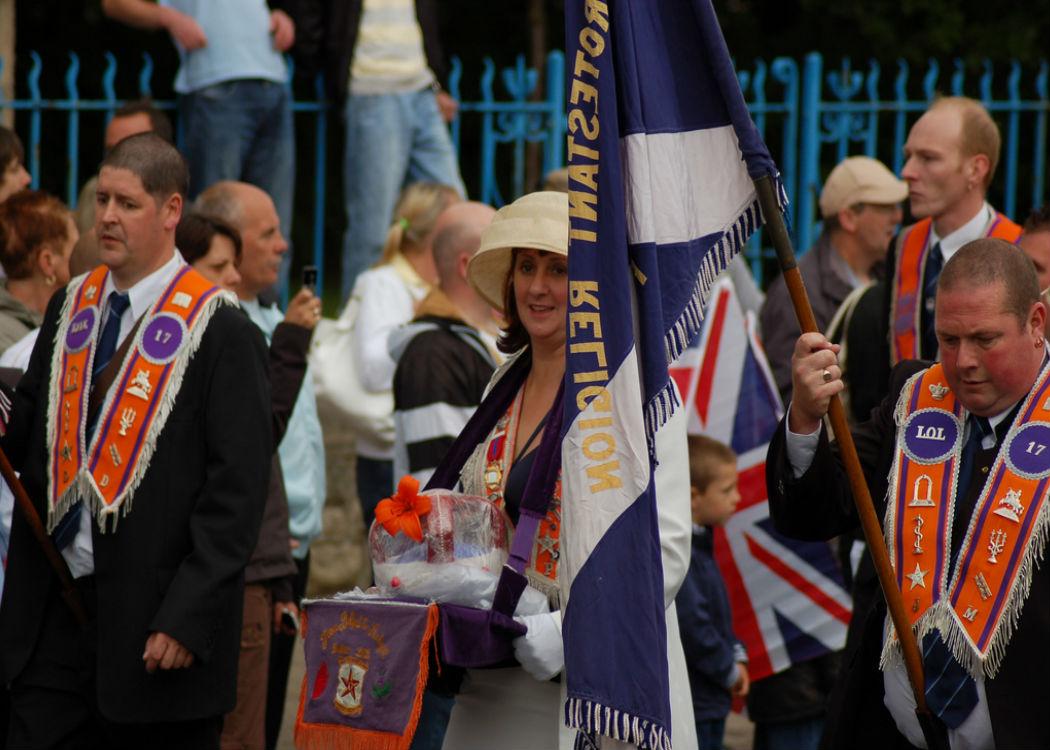 THE ORANGE ORDER has claimed that it is an “ethnic minority” as a petition opposing the organisation’s planned activities in Glasgow on Saturday reached 15,000 signatures in less than one day.

Orangefest, a day-long event in organised by the Grand Orange Lodge of Scotland, will see speakers, bands, choirs, pipe bands and drummers from Scotland and Northern Ireland address crowds. A march through the city centre is scheduled for later in the afternoon.

Critics of the Orange Order say that it promotes anti-Catholic sentiment and hatred and have demanded answers from Glasgow City Council (GCC) on why it has sanctioned the event.

The petition, titled, “Hold GCC to account on Orangefest – the people of Glasgow say ‘No More!”, says that people of Glasgow and Scotland are “sick of their voices going unheard in relation to sectarian, hate filled orange marches”.

It demands that the council provides answers as to why it has allowed the event to go ahead in a “city centre location on a busy Saturday”.

“This is council-sanctioned hatred and nothing more. What next, a Ku Klux Klan fun day in Victoria Park?” wrote John Lambie, one of the petition’s signatories.

Another signatory, Ashley Thomson wrote, “to have events like this which is spreading hate for Catholics is disgusting and should not be allowed on our streets”, while Brian Durkin said: “Glasgow and Scotland should have no part in this institutions rancid and bigoted behaviour.”

However, Eddie Hyde, Grand Master of the County Grand Orange Lodge Of Glasgow, claimed that the Protestant organisation has a “distinct culture” stretching back hundreds of years in the city.

“I would class us as an ethnic minority entitled to promote ourselves the same as any other faith,” he said.

He continued: “We stand for civil and religious liberties for all. We may not like the other events in George Square and disagree with much of it but we respect their right to assemble and express themselves in George Square or wherever.”

The Orange Order is a fraternal organisation with the principle aim of upholding the Protestant faith. Non-Protestants cannot become members, and any member that marries a Catholic faces expulsion.

Politically, the organisation is conservative and unionist, with links to Ulster loyalism, and campaigned for a No vote at last September’s independence referendum.

The event has caused disquiet within the Labour-run council with opponents questioning why there was no discussion before approval for the event was given.

Leader of the SNP opposition in the council Susan Aitken said that they were “deeply concerned” that the event had been approved for a summer Saturday.

She continued: “My group has asked a number of questions, to establish who approved this event and when, how much the event will cost the public purse and what steps have been taken to ensure the safety and security of the wider public.

“The SNP group believes it is questionable at best that decisions to stage events of this kind, which are clearly going to be controversial, are being taken without any discussion with elected members and without any opportunity given for them to represent their constituents’ views.”

It has also emerged that a civic reception for the Orange Order took place in the City Chambers on Monday.

A spokesman for the city council said: “People use George Square and other public spaces in Glasgow for a range of events and activities.

“Providing the events are properly planned and don’t encourage unlawful behaviour the council is not permitted to simply ban them on the grounds that someone dislike aspects or holds contrary views to the organisers.”