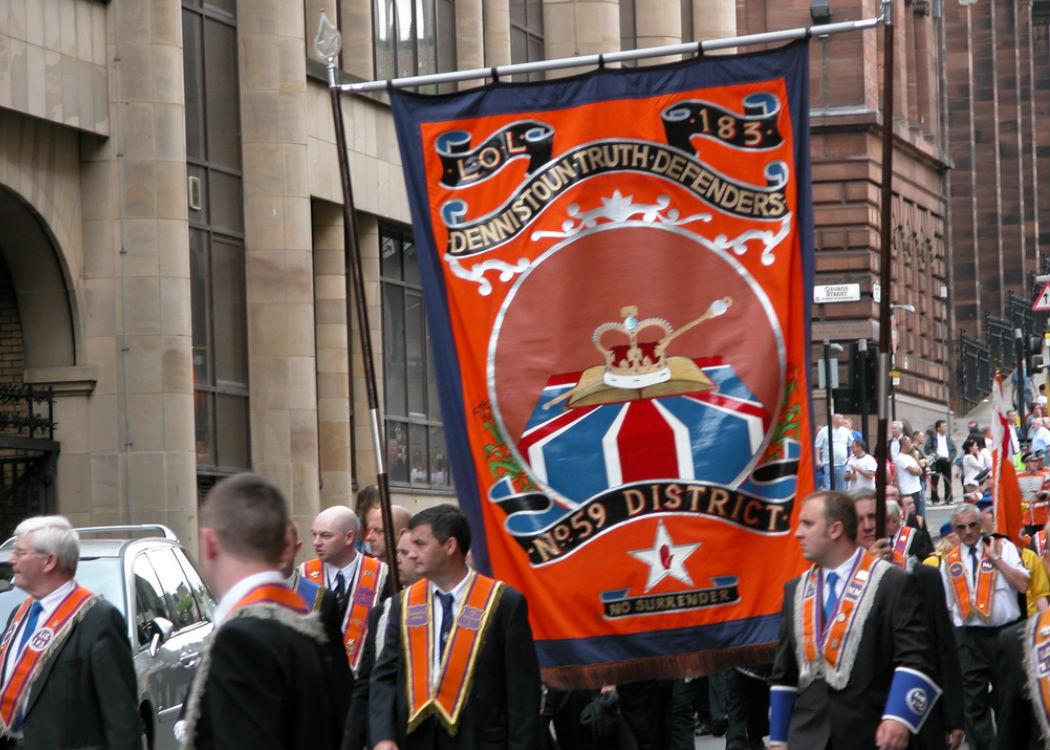 Professor Tom Devine and the Orange Order speak to CommonSpace

ON SATURDAY, there is a festival taking place in Glasgow’s George Square. It’s set to be a noisy and colourful affair, billed as a celebration of “history and culture”. For the weans there are trampolines, bouncy castles and slides. Expect thousands of people with lots of music and speeches. Expect also bevvying, boisterousness, and, yes, bigotry.

For this is no ordinary cultural celebration. This is the inaugural ‘OrangeFest’, a day to celebrate the history of an organisation which bases its existence on the military victory of a Protestant king over a Catholic king several hundred years ago.

Since news of the Orange Order’s festival came to light earlier this week, debate on social media has gone into overdrive.

Over 27,000 people have signed a petition opposing the event. They say that the people of Glasgow are “sick” of putting up with “sectarian, hate-filled Orange marches”.

Meanwhile, city centre restaurants have had Saturday afternoon bookings cancelled while nearby pubs are bringing in extra security for the occasion.

The reaction has suggested that Scotland’s tolerance is wearing thin for the kind of religious triumphalism that the Order is renowned for. But does the event itself suggest that Orangeism in Scotland is facing a crisis of historic decline?

Is this the organisation attempting to affirm – perhaps to itself more than anyone else – that it still has a place in a new Scotland?

“There’s a perception that all we do is cause trouble. It’s all about talking to people and having an open dialogue.” Robert McLean, Grand Orange Lodge of Scotland

“This event has been in the planning now for well over a year,” Robert McLean, executive officer of the Grand Orange Lodge of Scotland, tells CommonSpace.

“It’s an open invitation for anyone to come along and find out what the Orange Order is all about. There’s a perception that all we do is cause trouble. It’s all about talking to people and having an open dialogue.”

Orangeism was brought to, mainly west-coast, Scotland by Irish Protestant migrants in the late 18th century and like in Northern Ireland, it maintains strong links with unionism and loyalism.

Hundreds of Orange marches continue to be held every year across Scotland, the biggest of which is held on or around the 12th of July which celebrates the political, economic and social domination of Ireland by the Protestant minority between the 17th and early 20th century.

The organisation says it has extended an invite to the Catholic Church to attend OrangeFest, as well as other faith groups, although whether that invite is taken up or not remains to be seen.

It is still the case that any member of the Order that marries a Catholic faces expulsion and one suspects that a blessing within the vicinity of George Square may not receive the warmest of welcomes.

“The political teeth of the Order have been drawn. They don’t represent a threat to anybody anymore.” Professor Tom Devine

But despite the fears about violence on Saturday, Scotland’s pre-eminent historian Professor Tom Devine believes that the Order no longer has the “political teeth” it once had and any attempts for it to open up should be welcomed.

“It has been far too introspective and paranoid,” he tells CommonSpace. “I know at one point it was very difficult to get any information about them at all.

“Anything it can do to open its doors will help it get a more positive public profile. The political teeth of the Order have been drawn. They don’t represent a threat to anybody anymore.”

Indeed, in a sign of its reduced clout, the Order has been forced to search for unlikely allies in the political arena. During the independence referendum campaign there were reports of links between the Order and the Labour Party via Glasgow City Council as the two declining instiutions of Scottish society sought to preserve the union.

Like the Order, Labour – which stood on a platform with Tories during indyref, another unthinkable alliance – has suffered greatly as support for independence has grown.

Both organisations, once much mightier in Scotland, are suffering a crisis of identity and status.

What then, happened to this once politically and socially influential group in Scotland?

“The Order used to be a significant public force in Scotland in 19th and middle of the 20th century,” Devine explains.

“But over the years it has declined in number and, more importantly, declined in political clout and respectability.

“It represents a manifestation of the past, to some extent the sectarianism and tribal loyalties of the past. But like most organisations associated with old industrial scotland, de-industrialisation has been a hammer blow to it. It’s no longer a force to be reckoned with.

“They remind me more and more of the poor whites in the southern USA with the advance of black emancipation. There’s been much more Catholic upwards socially mobility and many of these communities have been left behind.

“The thing to bear in mind is that the Order no longer represents the ‘Protestant working class’. There’s always been a strong religious element in Orangeism but the haemorrhage of working class people from the Church of Scotland or any Protestant religious groupings has been much much worse than haemorrhage from Roman Catholicism.”

Although the decline of Orangeism has been long and slow in Scotland, recent events have speeded it up. With the rise in popularity of Scottish nationalism, the monarchist and loyalist tradition that is so intertwined with the Order has been squeezed out of the political discourse.

The main interventions made by these groups in last year’s referendum came in the form of an Orange Order-backed anti-independence march in Edinburgh, and a riot in George Square following the No vote by unionists.

Meanwhile, the collapse of Rangers Football Club, a bastion of football pride for so many within the loyalist community in Scotland, has damaged an already fraught and fragile identity.

“Loyalism, queen, Rangers and an understanding of Protestantism… these were all parts of a grassroots identity.” Professor Tom Devine

Devine says that the combination of these factors has had a “lethal effect” on the self-confidence of these, almost lost, communities.

“It’s sad actually for the communities affected by this,” he says. “They’ve had the rise of Scottish nationalism which some now support but very few did. They’ve had the demise of their sporting champions and Orangeism itself is in decline. It’s almost a treble whammy.

“It must have had a pretty lethal effect on their sense of self confidence in these communities. This whole mixture of loyalism, queen, Rangers and an understanding of Protestantism… these were all parts of a grassroots identity. But they’ve been hit by negative forces.

“In one sense, it’s been a tragic. I don’t like to see any community die. But, of course, what can’t be condoned is some of the more acrid manifestations of their identity.”

The damage that de-industrialisation caused to working class communities of all kinds in Scotland remains an injustice and a blight on society. Yet, one suspects that few tears will be shed for the slow death of a set of traditions and beliefs that most believe to be regressive and belonging in the past.

The Order says that it has planned the event on Saturday as it has “been part of Scottish life over 200 years and a lot of people leave and don’t realise what it’s all about”.

Perhaps that is the case. Or perhaps,as seems more likely, people know perfectly well what “it’s all about” and that is why the Order is a declining organisation in a Scotland that is leaving it behind.