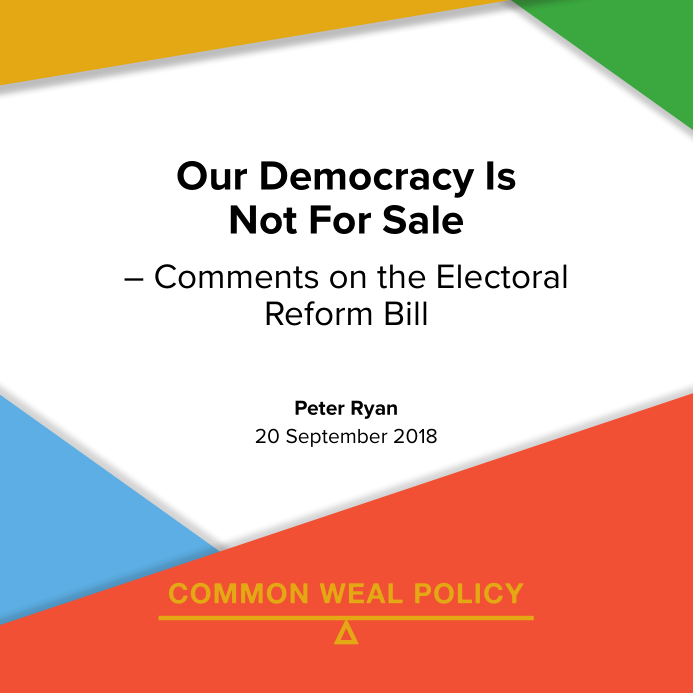 The Scottish Government’s 2018-19 Program For Government has called for an Electoral Reform Bill. In an age of digital political campaigns, this Bill must include safeguards to prevent the abuse and effective purchase of our democracy by those who are rich enough to do so.

Common Weal’s latest policy paper seeks to upcoming discussions on electoral reform by examining the changing nature of political campaigning and makes key recommendations around areas such as campaign funding, digital campaign transparency and undue outside influence of elections and referendums.

The paper, “Our Democracy Is Not For Sale” has been written by Peter Ryan who also recently published a policy paper for Common Weal on the rise of the use of data in election campaigning and the importance of maintaining transparency and control over its use.

In his latest paper, Ryan makes the case that the rise of digital campaigning lacks transparency both in terms of how much money is spent on them and who is spending that money.

It is deleterious to our democracy if unknown and unaccountable individuals, groups or political parties can spread political information, propaganda or outright “fake news” and “micro-target” it towards specific demographics deemed particularly susceptible to it.

To this end, the paper recommends that all digital political adverts should include imprints on them clearly stating who is backing that particular advert or campaign (in a manner analogous to the imprints already found on printed political leaflets).

As digital campaigning does not require the same material overheads in terms of leaflet printing and distribution as is the case with physical, printed leaflets it is essential that the costs of staff are now included in campaign spending accounts for the purposes of campaign spending limits. Otherwise it would be possible to hire a large team of IT specialists to distribute potentially unlimited digital political adverts long after an organisation dependent of physical leaflets would breach their campaign spending limits.

Further, it is now clear that the current system of fines for breaching spending limits is completely inadequate. Recent high profile cases of spending breaches have been met with – at best – paltry fines which are simply absorbed as “the cost of doing business”.

Fixed fines are no longer adequate deterrents to campaign spending breaches. A fine set at a level sufficient to bankrupt a small organisation may be easily absorbed by a major political party. Instead, fines should be scaled by the size of the breach and by the offending party’s ability to pay. As it may be that even in this case, fines would be an inadequate deterrent, the Electoral Commission should consider more significant punishment up to and including the voiding of election results and the barring of offending candidates or parties from standing in the re-run.

Finally, the paper also considers the source of funding for election campaigns. In an age where elections may be increasingly influenced by large influxes of outside money – especially with regard to online campaigning – a “no representation without taxation” approach should be considered whereby only those who would be directly affected by the result of an election or referendum may be eligible to donate money in amounts above the declarable spending threshold. This could be defined for Scottish elections and referendums as allowing declarable political donations only from those who pay taxes in Scotland.

These represent significant reforms to the way that political campaigning would be conducted in Scotland – especially in the digital realm – but the choices open to us are to grasp the challenge and act to prevent abuses of our electoral system or to do nothing, allow confidence in our democracy to trail away and to surrender political decision-making to those rich enough to buy our democracy wholesale.