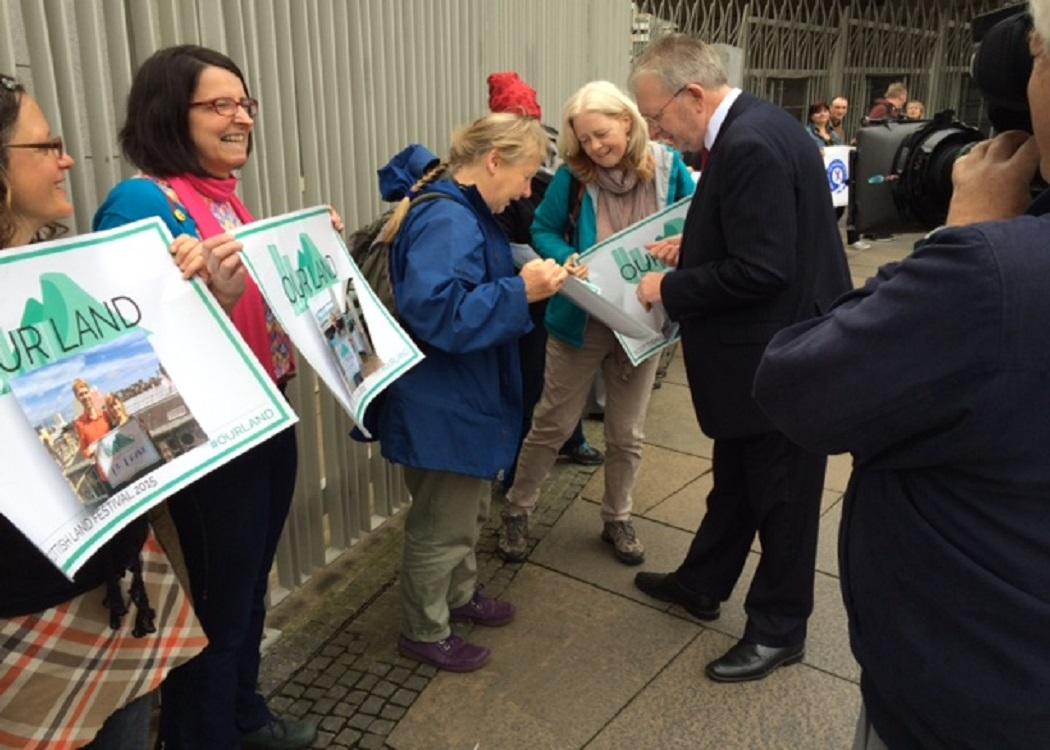 THE Our Land campaign has launched five demands for land reform in Scotland at a demonstration outside the Scottish Parliament.

The demands are part of a campaign to counter extensive lobbying of Scottish politicians by landowning interests, calling on them to ‘#BeBrave’. Demands include an end to 100 per cent exemption on non-domestic rates on derelict land and a requirement for all land-owning companies to register in an EU member state.

MSPs were met by campaigners outside Holyrood on Wednesday morning who held posters featuring photographs taken by people across Scotland highlighting the problems brought to their communities by private land ownership.

The five demands are:

1. Reinstate the requirement for all landowning entities (like companies) to be registered in a member state of the EU.

2. Hold firm to existing proposals that: reintroduce non-domestic rates to sporting estates and deer forests; provide a mechanism for communities to appeal to Scottish ministers about negligent landowners; require landowners to have meaningful consultation with local communities; demand information and transparency on landholdings; set up a Land Commission; reform inheritance law to equalise land rights among children and improve conditions for tenant farmers.

3. End the 100 per cent exemption on non-domestic rates on derelict land

4. Acknowledge that this Land Reform Bill won’t solve the problem of unaffordable and unavailable land in Scotland and prepare to adopt further measures in the next parliament to tackle land taxation, lack of information about land ownership, derelict and vacant land, absentee landlordism and the exorbitant cost of land for housing.

5. Welcome the #OurLand festival which we intend to run on the Glorious Twelfth every year until land in Scotland is affordable and available and owned by a wide diversity of people, communities, companies and trusts.

Robin McAlpine, director of Common Weal told CommonSpace that there is a consensus emerging in Scottish politics: “We know that a lot of politicians have come to understand Scotland’s problems with land ownership and we know that there is a lot of sympathy among politicians for taking real and substantial action which will start to change things,” he said.

However he warned that campaigners would have to remain active and get their message out to counter powerful lobbying efforts: “We also realise that they have been the subject of a well-organised lobbying campaign seeking to get them to water down the proposals we have.

“We just want to reassure them that many people right across Scotland feel strongly about this, want to see change and while they may not have big lobbying budgets, there is very real and deep support for our politicians being brave,” he said.

“MSPs, civil servants and the Scottish Government’s legal team must know the vast majority of Scots want this situation to change.” Lesley Riddoch

Writer and campaigner Lesley Riddoch told CommonSpace that Scotland’s problems with land ownership are well documented: “According to the eminent historian, Professor Jim Hunter, Scotland has the ‘most concentrated, most inequitable, most unreformed and most undemocratic land ownership system in the entire developed world’.”

She too called on campaigners to join the #BeBrave campaign to urge politicians to bare the public interest in mind: “MSPs, civil servants and the Scottish Government’s legal team must know the vast majority of Scots want this situation to change. Yet land reform can seem like a specialist subject in which large landowners and lawyers are the only experts.

“So if MSPs feel daunted this year, as they consider the modest proposals for change in the Land Reform Bill, we ask them to get well briefed, be brave and deliver meaningful change,” she said.