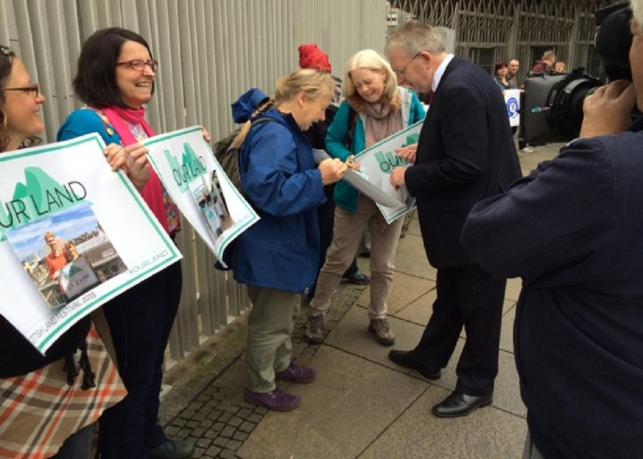 CAMPAIGNING FOR more equal ownership of Scotland’s land will step up a gear this August as the second ‘Our Land Festival’ begins across the country.

Scotland’s land reform movement won significant progress in the Land Reform Act 2016, which was passed overwhelmingly in the Scottish Parliament to improve access, transparency, community ownership, and to build towards further land reforms.

However, the bill was passed with the concession that far greater action would be needed – including on areas like tax and housing – to redistribute wealth in Scotland.

The ‘Our Land’ campaign, created by Common Weal, Women for Independence, Scottish Land Action Movement, and Radical Independence, alongside land reform campaigners Andy Wightman and Lesley Riddoch, is calling on groups and individuals to set up events to join the festival from the 12 August onwards.

Author and broadcaster Lesley Riddoch said: “Scots have woken up to the fact that Scotland’s weird concentration of private land owners has put the brakes on everything from affordable housing to sustainable communities with locally-owned forests and energy systems, weekend wooden huts and fishing on some of the best lochs and rivers in Europe.

“Sadly, none of that will change overnight with the Land Reform Act passed in March of this year. So the Our Land campaign which launched this time last year is back in 2016 with meetings to discuss our next five demands of the Scottish Government and to showcase the land-related problems that exist and the community solutions that are being forged right now, all over Scotland. I think folk are ready to challenge the idea that land is too precious/barren/complex to use and own more equitably in Scotland.”

Newly-elected Green MSP Andy Wightman added: “Our Land is a fantastic opportunity for everyone with an interest in land reform to come together and share ideas, issues and solutions to Scotland’s ongoing struggle for fundamental reform in land relations.

“Over the next five years in Parliament there is an unprecedented opportunity to make progress in democratising Scotland’s urban, rural and marine land. Individuals and organisations outside parliament should be ambitious in their demands and I look forward to working with them in the years ahead.”

Further information on Our Land is available on OurLand.scot