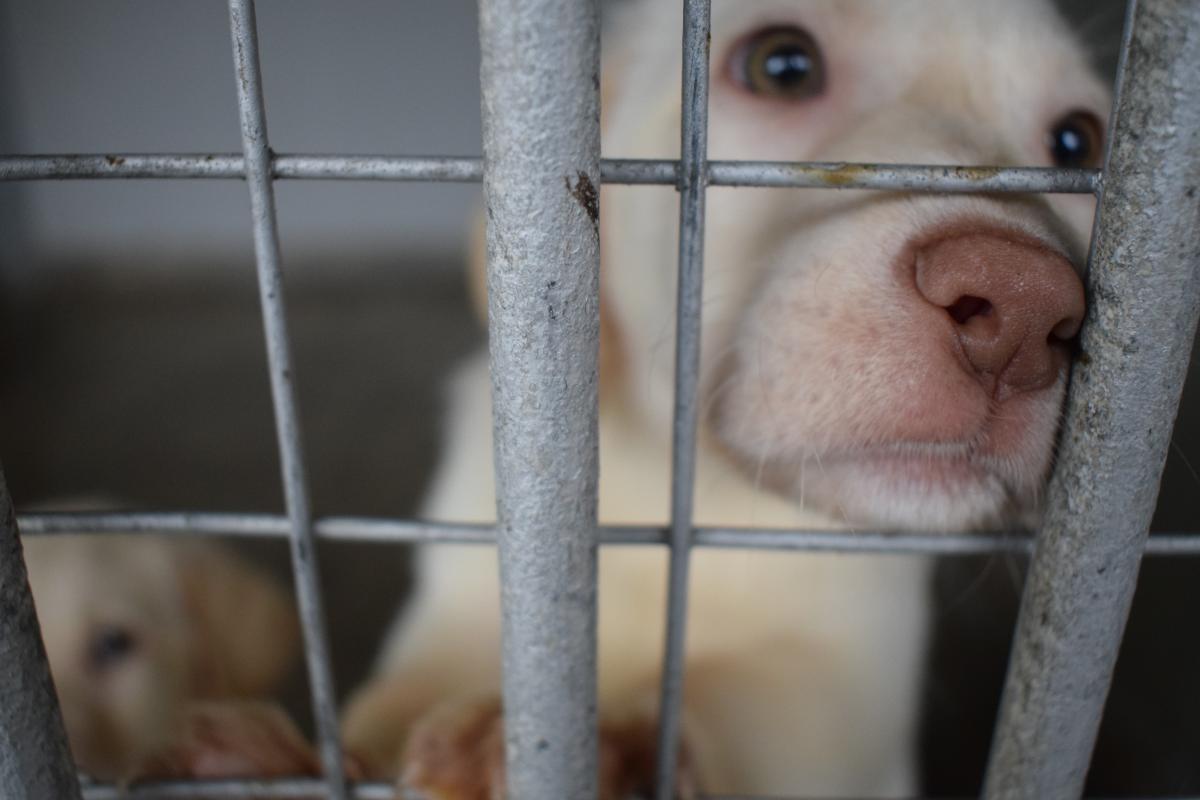 –          Following the pregnancies of two of the 60 dogs rescued from a suspected Moray puppy farm, the Scottish SPCA are now caring for 78 dogs and puppies, many of which are showing signs of disease and infection

OVER 60 dogs, including dozens of puppies, have been rescued from a raid on a Moray property suspected of being an illegal puppy farm.

In a joint operation conducted by Police Scotland, Moray Council and the Scottish Society for the Protection of Animals (SPCA), the animals were taken into care after concerns were raised about their on-site welfare.

The dogs – which are now under the care of the Scottish SPCA’s dedicated animal care teams – initially numbered 60, but due to the fact that two of their number were pregnant at the time of the raid, the animal welfare charity is now looking after a total of 78.

“Our animal care and veterinary experts have been selflessly working around the clock to provide care for these poor animals since the raid.” Scottish SPCA chief executive Kirsteen Campbell

“Our animal care and veterinary experts have been selflessly working around the clock to provide care for these poor animals since the raid. Whilst it is an immense challenge, the main thing is these dogs are all receiving an amazing amount of love and care.”

Campbell continued: “It costs an average of £15 per day to care for a single dog, but money is no object so long as these dogs are now in a safe place. Many of these dogs need ongoing veterinary care and we are going through a lot of food and supplies for the puppies. Any support members of the public can provide is most welcome.

“We cannot comment further on the specific details of this case as it is a live investigation.”

Moray Council’s Trading Standards officers took action after becoming aware of several similar posts on Gumtree advertising puppies for sale. The local authority has emphasised the need for a multi-agency approach in circumstances such as these.

The Moray raid follows the August conviction of Frank James, who was sentenced to nine months in prison after being found guilty of animal welfare offences committed while running what was believed to be Scotland’s biggest puppy farm, from which over 100 dogs, puppies, rabbits and ferrets were seized in November 2017.

Earlier this year, the Scottish SPCA – which spearheads Operation Delphin, a multi-agency taskforce aimed at ending illegal puppy farming and trading – named the multimillion pound industry as one of the chief reasons the charity is busier than ever.

Speaking to CommonSpace in February, Kirsteen Campbell explained: “Our work to tackle the illegal puppy trade has led to increased awareness of this barbaric industry and offences against animals. The knock-on effect of this is more calls to our animal helpline and more incidents which our Special Investigations Unit and inspectorate have to attend.

“The expansion of our education programme, which is at the heart of our work, means more and more people are aware of responsible animal care too. We have made positive progress with the Scottish Government to amend legislation to allow us to rehome animals caught up in criminal proceedings more quickly and to increase maximum sentencing for animal abusers.”

In an effort to raise public awareness of the illegal puppy trade and the tactics employed by criminal breeders to deceive buyers, the Scottish Government launched the ‘Buy a Puppy Safely’ campaign last year. The campaign highlighted that one in four puppies bought online die before their fifth birthday, while one in three will experience sickness or die in their first year.

“We’re working with animal welfare charities to raise awareness of the real consequences of buying illegally and highlighting how to spot the warning signs of an illegal dealer.”

Gougeon has urged the public to make sure they see the puppy with its mother before purchasing the animal, and to get the correct paper work from the seller.

“If there’s no mum and no paperwork, then walk away and report your concerns to the Scottish SPCA helpline.”

To properly care for the animals in the Moray operation, the Scottish SPCA has launched an urgent public appeal for Royal Canin puppy milk and cotton pads needed for toileting and cleaning puppies. These can be purchased by anyone wishing to help from the charity’s Amazon wishlist; otherwise, supplies may be dropped off at the Scottish SPCA’s headquarters.