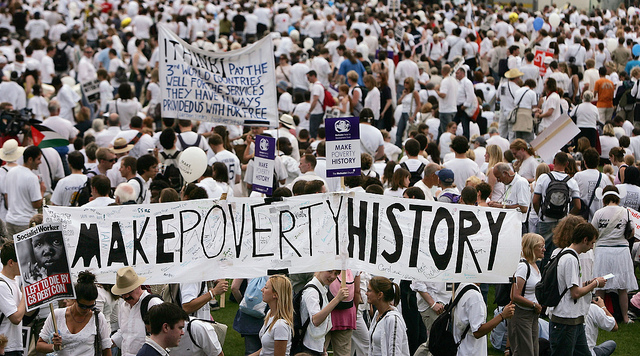 NEW official statistics have found levels of poverty and income inequality are rising throughout Scotland with over one million living in poverty, prompting calls from campaigners, charities and opposition parties for further action from the Scottish Government and fresh condemnations of Tory austerity from First Minister Nicola Sturgeon.

Released today [28 March], the latest findings reveal that the incomes of low-income households have fallen further behind those of middle and high-incomes, with the richest ten per cent of the Scottish population now possessing 27 per cent more income than the bottom 40 per cent combined.

Commenting on the new figures, the Poverty Alliance director Peter Kelly told CommonSpace: “These alarming figures must provoke immediate action. In a just and compassionate society, it’s simply not acceptable that one in five people are struggling to keep their heads above water. While UK Government austerity policies continue to pull people under, the Scottish Government risks missing its own Child Poverty targets unless action is taken this year.”

READ MORE: Fresh calls for a right to food to be put into Scots law follow shocking food poverty figures

Jamie Livingstone, head of Oxfam Scotland, also argued that while not all powers to narrow income inequality rested in Scotland, the Scottish Government must do more to combat the growing problem.

Livingstone said: “It’s deeply troubling that the gap between the richest and poorest people in Scotland is continuing to grow.

“If this widening income inequality is left unchecked then it will continue to undermine efforts to tackle rising levels of poverty as these challenges are interconnected.

“The Scottish Parliament must do everything in its power to turn its tough talk on tackling inequality into concrete action if it’s going to make meaningful progress in creating the fairer, more equal Scotland we all want to live in.”

“The Scottish Parliament must do everything in its power to turn its tough talk on tackling inequality into concrete action if it’s going to make meaningful progress.” Oxfam Scotland head Jamie Livingstone

Additionally, new research carried out by the Child Poverty Action Group (CPAG), released to coincide with the new official poverty statistics, found that the four year freeze on children’s benefits alone – child benefit, the child elements in tax credits and Universal Credit – will lead to an average loss of £240 per year for families with children, resulting in 100,000 more children in poverty by 2023-24. However, CPAG Scotland has pointed out that for many the losses will be greater, due to the freeze in aid for housing costs and other benefits, and the impact of the UK Government’s benefits cap and the two-child limit.

These findings come less than a week after the Resolution Foundation report: ‘Wrong Direction: can Scotland hit its child poverty targets’, which projects that 29 per cent of children in Scotland will be in relative poverty by 2023/24 – a significant shortfall on the Child Poverty (Scotland) Act’s target of 18 per cent.

The Scottish Government has committed to introducing a new income supplement for low-income families by 2022 as part of wider action to meet statutory targets to cut child poverty to less than 10 per cent by 2030.

“Whilst there is no question rising child poverty is driven by UK government social security cuts, Scottish ministers must act now and use new powers to boost family incomes immediately.” CPAG in Scotland director John Dickie

Despite levels of child poverty being lower in Scotland than across the UK – where the rate stands at 30 per cent – the new data provoked passionate exchanges in parliament, and a flurry of demands from the third sector, campaigning organisations and opposition parties for more radical and immediate measures to combat the issues raised.

The Give Me Five campaign, supported by a range of academics, children’s charities, anti-poverty groups and Scottish church leaders, have renewed their call for the Scottish Government to deliver an immediate cash boost for families who are struggling to get by.

“Whilst there is no question rising child poverty is driven by UK government social security cuts, Scottish ministers must act now and use new powers to boost family incomes immediately. A £5 top up to child benefit would be one simple way of lifting thousands of children out of poverty and protecting many more. As time slips by, childhoods slip by, childhoods blighted by the simple fact their families just don’t have the money they need to give their children a decent start in life.

READ MORE: More than half of Scots in fuel poverty, survey suggests

“These aren’t just statistics. These are children going hungry, missing out on school trips, unable to enjoy the activities and opportunities their better off peers take for granted. These are parents going without meals, juggling debt and seeing their own health suffer to protect their children from the poverty they face”.

Dickie continued: “These official figures reveal a staggering one in four children in Scotland were living in poverty between 2015 and 2018. Two thirds (65 per cent) of those children are living in working families and all the evidence suggests that the eye-watering cuts to UK benefits that working and out of work families rely on are the key drivers of this trend. Worse still independent forecasts suggest bigger rises are still to come unless governments at every level act with urgency.”

Dickie added: “The UK Government needs to face up to the reality of child poverty and rethink the benefit freeze, two child limit and benefit cap that are trapping so many children in hardship.”

Sally Ann Kelly, CEO of children’s charity Aberlour, also commented: “The rise in child poverty in Scotland should shame us as a society, but sadly it is not a surprise. Today’s figures reflect the reality we see every day for the families we work with across Scotland, with more and more children affected by extreme poverty. Families are having to choose between heating their homes or feeding themselves.”

“We have to help struggling families by putting more money in their pockets now, not waiting until 2022. An increase in child benefit of £5 per child per week would help to lift tens of thousands children out of poverty right now. Scotland’s children cannot wait.”

“An increase in child benefit of £5 per child per week would help to lift tens of thousands children out of poverty right now. Scotland’s children cannot wait.” Aberlour CEO SallyAnn Kelly

At today’s First Minister’s Questions, Scottish Greens Parliamentary Co-Leader Alison Johnstone MSP argued that radical measures to boost the incomes of poorer Scots households are necessary, and that the new figures made the case for the abolition of the Council Tax in favour of a progressive alternative even more necessary.

Johnstone commented: “This increase in the numbers of children living in poverty is hugely concerning. This is yet more evidence, not that any more was needed, that UK welfare reforms are plunging hundreds of thousands of people into poverty, many of them children.

“A U-turn on welfare reform from the UK Government is required more than ever. It should remove the Two Child Limit; end the Benefit Cap, which can take more than £2000 a year from our poorest families, and stop the cruel benefits freeze.

“But the Scottish Government must consider more radical action too. We should be topping-up Child Benefit by £5 right now, and not wait until the proposed Income Supplement is ready. And we must redouble efforts to maximise take-up of social security by raising awareness and making devolved payments as easy as possible to apply for and receive.”

“Greens have been working hard to get extra money where it needs to go. Green budget deals have put hundreds of millions back into local government, ensured that the richest Scots pay more to support our poorer families and mean that poverty-fighting local tax reform is back on the agenda.”

Scotland’s poverty levels, and in particular the crisis of food poverty highlighted by recent findings from the Independent Food Aid Network and A Menu for Change, were also cited by Scottish Labour leader Richard Leonard, who asked the first minister if she agreed that “a decade of Tory austerity” was a further reason why Prime Minister Theresa May needs to resign.

Sturgeon responded: “Yes, I do. And I look back a few years to 2014, and I reflect on the fact that if Labour hadn’t teamed up with the Tories to stop Scotland becoming independent, we wouldn’t have a had a Tory prime minister for these last few years.”