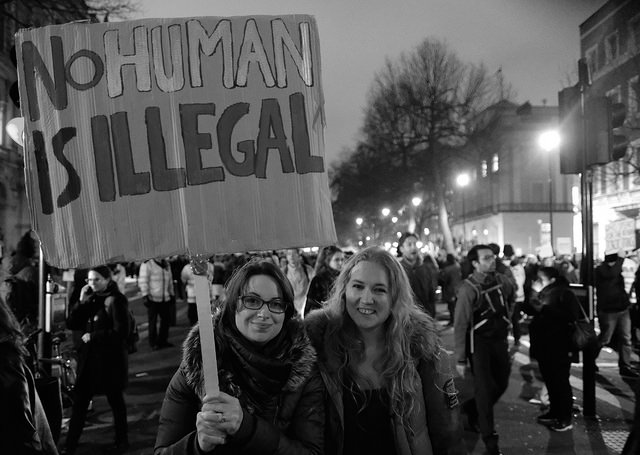 THE UK Government’s immigration policy, self-styled as “the hostile environment”, needs a radical overhaul if wider injustices beyond the Windrush scandal are to be addressed, migrant rights campaigners have told CommonSpace.

“The ‘hostile environment’ is creating a hostile environment for everyone,” said Anne Stoltenberg, project development manager at Migrant Voice UK. “Commonwealth migrants have been caught up in this and it’s just become such a shocking issue, but this is just one of the groups affected.”

The impact of changes to immigration policy set in motion by the prime minister and then home secretary Theresa May in 2012 have come under intense scrutiny after it came to light that people who came to the UK from Commonwealth countries as long as 70 years ago, the ‘Windrush generation’, were being treated as illegal immigrants because they had no documentation to prove they legally resided in the UK.

The situation, which the government has now vowed to resolve, emerged because of measures under the Immigration Acts of 2014 and 2016 which enlisted employers, landlords, and staff in the NHS, education, banking and other services to check people’s immigration status and deny access to those without the right to remain in the UK. The home office even set up a working group in 2013 which it initially branded the ‘Hostile Environment Working Group’, designed to encourage asylum seekers in particular to leave the country.

Pauline Diamond Salim, media officer for Scottish Refugee Council said: “We see the impact of hostile environment policies on people every day. On a practical level we are very concerned about people’s ability to access their rights within this environment.

“On a wider level, we absolutely resist the culture of division, hostility and suspicion that underpins the hostile environment and that it attempts to transmit among people.”

Beth Ziv, a volunteer at the Unity Centre in Glasgow said that, under the ‘hostile environment’, “borders are going up everywhere” and that people need to start making connections between the situation facing the Windrush generation and the government’s wider immigration policy.

“I’m nearly six months pregnant and I don’t need to worry about going to the doctor because I’ve got a UK passport,” she said. “I’m not from here but it was much easier for me to do that because I’m from the US. There are mothers who are afraid to access healthcare because of immigration laws.”

Ziv said this was a consequence of a policy which seeks to make it hard for people to get support and that, as a result, “all the children whose families are seeking asylum in the UK are suffering”.

As home secretary,  May set out this policy direction, the aim of which, she said, was “to create, here in Britain, a really hostile environment for illegal immigrants”.

By making life so difficult for people at every stage, the idea was that nobody would want to live as an undocumented immigrant in the UK and would choose to leave or not come in the first place. However, Stoltenberg said that, in reality, people who are undocumented are living in the UK in poorer circumstances and at greater risk, while others who are entitled to remain and to access services are being denied due to confusion over the policy.

“Migrant advisors who we work with are finding that very often people are being denied services they are entitled to,” she said. “Because this atmosphere has been created, people are being refused in situations, for example where they have the right to work but because employers are worried and their passport is being renewed, or their landlords aren’t sure, and they’re being denied.”

A study into a pilot of the Right to Rent scheme – which asks landlords and agents to check the immigration status of prospective tenants and refuse tenancy to people without a legal right to remain or face a fine or prison sentence – found that it led to racial profiling and discrimination against British people who did not hold passports, particularly Black and Minority Ethnic (BME) people.

Stoltenberg said that many landlords were uncomfortable being part of the scheme, but were given no choice.

“Landlords were suddenly tasked with being an immigration officer – that shouldn’t be your job if you’re renting out a flat,” she said.

The whole ‘hostile environment’ agenda, Stoltenberg said, has been driven by an “overly blind focus on net migration figures” as opposed to considering “what’s good for the country”.

“Fundamentally, asking people to prove their immigration status at all times is not a good thing for society at large,” she said. “We don’t want the NHS, which is already over capacity, to be spending time doing these checks. [And] it creates a wider environment where people are constantly looking over their shoulder.”

Beth Ziv echoed this view and said the policy should be changed as a matter of urgency. “The hostile environment is  blatantly racist, and just anti-human. It’s such a blanket policy which causes suffering for untold numbers of people.”

Ziv said she felt that some of the most vulnerable migrants were missing from recent discussion around the impacts of immigration laws on Commonwealth migrants.

“A lot of coverage has been feeding into a ‘nice migrant’ narrative and that’s been bothering me. This is the thin end of the wedge.

“These laws affect people in other situations who are not seen as deserving of sympathy. They send back people all the time from Commonwealth countries who are spoken about as ‘foreign criminals’.

“What they’re talking about often are young people living in London who’ve been there all their lives and they’ve got in some trouble, like any other young person might.”

Ziv said that people in this circumstance are being “punished twice”, because they’re serving sentences, which could be for something as “small as cannabis possession” and then being threatened with deportation and denied access to services, where “a white person who committed the same crime would not”.

In order to properly redress the unfairness of the UK immigration system, Ziv said that broader reforms were also needed, the most urgent of which she said would be the abolition of detention centres and the right to work for people waiting for decisions on applications for asylum “in order to give people back their dignity”.

“In future I think people are going to look back on detention and see it as a shame on this country,” she said. “It’s a constant threat hanging over people’s head and the abuses in detention centres are well documented but the Home Office is so unaccountable. It’s a massive injustice.”

Stoltenberg said that the UK Government’s position on immigration was impacting on social attitudes in a negative way, but that there was a noticeable difference in Scotland in this regard.

“The Westminster government’s tone on immigration is very negative and it’s making migrants feel unwelcome – this is an issue both of policy and language, which is percolating down to the rest of society,” she said.

“We look at the integration strategy in Scotland, and it is very good.  Of course I’m not saying everything is perfect and that people don’t face discrimination, but there is a marked difference.”

Commenting on the crisis which has arisen around the Windrush generation, the Scottish Government’s minister for Europe Dr Alasdair Allan said it had “exposed some of the serious flaws in the UK Government’s immigration and citizenship policies”.