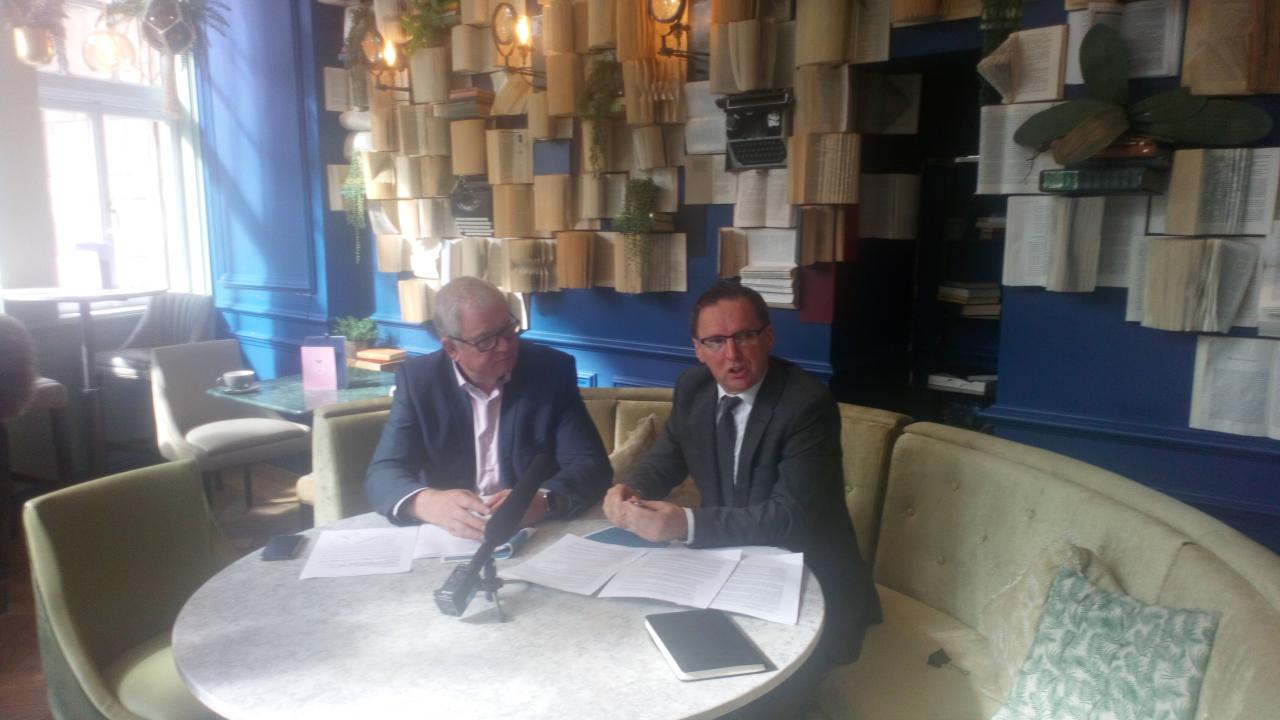 A NEW report authored by former UK transport minister Tom Harris and commissioned by ScotRail operator Abellio has found considerable support for public ownership of Scottish rail, despite an evident attempt to offset this demand against rail improvements.

The report, titled “Is Scotland on the right track” is based on a survey by Mark Diffley Consultancy and Research, which asked over 1000 rail users across Scotland for their views on which aspects of the rail service was their priority. It asked whether overcrowding, high fares, low staff numbers, and run-down facilities should be the focus of improvement and then asked if the money should be spent on public ownership instead.

In spite of this framing in the survey, 50 per cent of the public still placed “spending more on bringing railways into public ownership” in their top three priorities.

Below: Questions from the survey 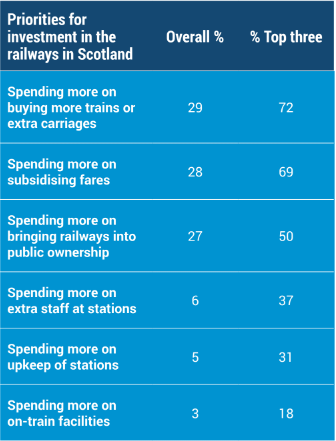 The report was intended as part of a fightback against widespread public, and growing political, support for public ownership. In October 2017 the Legatum Institute found a massive 76 per cent of the UK public back rail nationalisation.

At the launch of the report in Glasgow’s Central Hotel Tom Harris spoke of his “frustration” at widespread support for a public rail service in Scotland and committed himself to the fight to keep the current privatised franchise system and spoke up the “benefits” of the heavily subsidised private system, and urged the Scottish Government not to move towards public ownership.

Asked by CommonSpace if the report signified that the call for public ownership was gaining ground against the current system, he said: “Yes, from my perspective there is an element of frustration that the debate has become skewed [towards public ownership].”

In the press release for the event, Harris stated: “It would be expensive, childish and counter-productive to dispense with the clear and indisputable benefits of private sector involvement in our railways, without which we would not have experienced the renaissance we have seen.”

Demands for public ownership have mounted in recent years as criticism of the quality and cost of rail services for passengers have grown.

Harris was Transport minister from 2006 to 2008, and claimed at the launch to have been responsible during his time for shifting the financial burden of the rail system “from taxpayers” to rail users.

However private train operators continue to be propped up by public money. Abellio relies more than most operators on the subsidy system, which sees the Dutch based company (owned by the Dutch government) soak up 45 per cent of its income through direct and indirect subsidy in Scotland, according to a report by the TSSA union and Common Weal published in 2017.

Despite the level of subsidy, ScotRail has failed to keep up with the efficiency of public systems in comparable countries, which are 40 per cent more efficient on average according to the same report.

Figures recently released by Network Rail show ScotRail’s punctuality fell by more than 8 per cent between July 2017 and July 2018.

Harris’ report shows that there is considerable anger at high fares, and he concludes from this that more subsidies should be provided to private rail operators like Abellio, in order to suppress ticket prices.

He argues that defending the private franchise system is the key concern, but that if a change in industry model is deemed necessary, then the ‘concession system’ should be adopted.

Under this model the Scottish Government would get any profits made from the service, but would also expose itself to all the financial risks of running the service, with a private company paid “a standard agreed monthly sum”.

President of the TSSA union Manuel Cortes responded to the report by saying: “The fact that Abellio have commissioned this research is a sign of how desperate they have become to cling onto ScotRail, regardless of the cost to the Scottish people.

“This report shows that 50 per cent of Scots rate bringing railways into public ownership as one of their top three priorities! Even Abellio’s own propaganda shows people are fed up with them and want ScotRail run in the public sector!

“We saw at the weekend that one in seven ScotRail trains arrived late this June and July. Abellio should be focusing on delivering a better service not trying to distract and influence public opinion with a report.

“The report fails to make any convincing case for privatisation. The improvement to rail services this century are largely down to Network Rail – which the last Labour government nationalised.  All Harris does is claim that everything good on the railways is down to private train operators and everything bad is down to factors outside their control. If Abellio can’t run an efficient railway on a 45 per cent subsidy, then the SNP must take back the keys.

“Tom Harris, author of the report, should of course be aware of Network Rail’s part in the rail network’s improvements as a former rail minister under Tony Blair. But he’s a pure bred free market fundamentalist. I’m delighted that he is no longer part of our Labour family as his views are thoroughly Thatcherite Tory.”

Rail unions have expressed frustration at the slow pace of any move towards a public system.

In 2017 then Scottish transport minister Humza Yousaf hinted that a public sector bid for the ScotRail contract was possible in the event that Abellio fell below performance and financial viability guidelines.

However since then, and with the transport brief moving to Michael Matheson, the TSSA rail union has complained that such talk of a public bid has gone quiet.

At the launch event, Harris said that a public bid for control of Scotrail was “fine and well” so long as that bid “faces exactly the same challenges as the private sector faces”. Although the opportunity exists for a public bid to be made after the devolution of new powers to Scotland in 2016, the public bid would have to behave like a private corporate entity to stand a chance of winning the contract.

Responding to the report, a Scottish Government spokeswoman said: “We welcome the broad majority support for decisions about Scotland’s railways being taken by organisations overseen by the Scottish Government. This supports our long-held view a fully devolved Network Rail would deliver even more benefits for Scottish passengers and freight operators.

“Despite repeated denials by successive UK governments, we secured the right for a public sector operator to bid for a rail franchise in Scotland. We expect to make an announcement about this work in the near future.

“The Harris report acknowledges the importance of securing best value for the public purse from our public contracts. Our fundamental procurement principles of transparency and fairness will continue to be applied consistently to future rail franchises, as will our approach to consultation with the public and key stakeholders.”