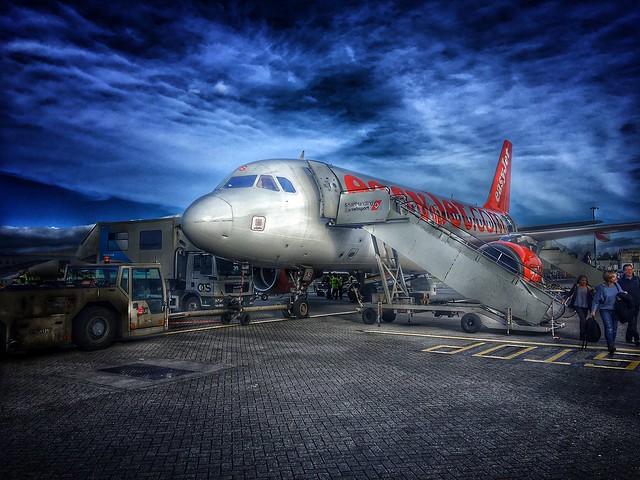 Scottish Government ministers, opposition politicians and environmental campaigners have all argued that abandoning the aviation tax cut alone will not be enough to address the climate emergency

DEBATE over the Scottish Government’s scrapping of plans to cut Air Departure Tax in Holyrood today [8 May] saw repeated calls, including from government ministers, for parliament to be ready to take “difficult decisions” to tackle the climate emergency.

Ahead of the Scottish Labour-instigated debate, it was confirmed on 7 May that the Scottish Government would abandon twice-delayed plans for the implementation of the controversial cut to the amount of tax paid by passengers flying from Scottish airports. These plans would have cut the levy by 50 per cent, ahead of its eventual abolition.

Following First Minister Nicola Sturgeon’s declaration of a climate emergency at the SNP conference in Edinburgh earlier this month, the Scottish Government was challenged by ADT’s critics in Labour and the Scottish Greens, who argued that the tax cut would lead to an increase in greenhouse gas emissions and set back new Scottish environmental targets.

Following Sturgeon’s confirmation at last week’s First Minister’s questions that the Scottish Government was reconsidering ADT in light of the new targets, finance secretary Derek Mackay yesterday said that the Scottish replacement for Air Passenger Duty was “no longer compatible” with the government’s climate targets.

With this reversal, today’s debate saw only the Scottish Conservatives left to defend ADT, while the other parties sparred over which of them was responsible for securing the Scottish Government’s reversal, and challenging each other to commit to other environmentally motivated policies, such as the Workplace Parking Levy, which Scottish Labour have opposed as regressive.

“But there’s a responsibility of everyone in parliament. If we’re serious about the climate emergency, we all have to look at policies and take the appropriate action to deliver those ambitious climate change targets.”

Mackay was echoed in this by Cabinet Secretary for the Environment, Climate Change and Land Reform Roseanna Cunningham, who added: “Aviation is only one part of the emissions picture. Meeting Scotland’s climate target will require many difficult decisions across all areas of the economy and society, and parliament needs to be ready for that.”

Speaking on behalf of the Scottish Greens, who have been consistent critics of ADT, Patrick Harvie MSP called on the Scottish Government to go further and drop its support for the proposed third runaway at Heathrow airport, saying: “We must make the longer-term case that aviation cannot be given a free pass.”

“Meeting Scotland’s climate target will require many difficult decisions across all areas of the economy and society, and parliament needs to be ready for that.” Environment secretary Roseanna Cunningham

During the debate, Scottish Labour MSP James Kelly confirmed that Scottish Labour was also re-examining all its policy, and advocated using some of the £150 million that ADT would have deprived the Scottish Government of to save the jobs of Scottish rail depots threatened with closure, as well as investing in Scotland’s public transportation.

Calls for further reforms and broader action from the Scottish Government to lower emissions were voiced by campaign organisations. Friends of the Earth Scotland, while welcoming the abandonment of ADT, reiterated to CommonSpace their position that additional measures would be necessary in order to properly address the climate emergency.

On 29 April, Friends of the Earth Scotland Director Dr Richard Dixon argued that Scotland must stop “doing the things which are ploughing us ever further into crisis”.

Dr Dixon said: “That means an end to new oil exploration and a plan to replace North Sea oil jobs with clean energy jobs, it means investment to make our energy-wasting homes more efficient and it means spending transport money on walking, cycling and public transport instead of things which encourage people to drive even more.”

Colin Howden, director of Transform Scotland, also welcomed the Scottish Government’s new position, saying that ADT’s “£300 million annual tax cut to the aviation industry” was “neither affordable, equitable, nor compatible with the Climate Emergency that the First Minister has rightly announced.”

Howden went on to emphasise that the scrapping of ADT should highlight the fact that the aviation industry is “grossly untaxed”, saying: “Airlines pay no tax on aviation fuel, there is no VAT on tickets, and airports benefit from duty-free retail. Car drivers pay taxes on fuel, even trains and buses pay some taxes on fuel, but aviation avoids paying any tax at all. How many more tax cuts does this most-polluting of transport industries want?”

Dr Craig Dalzell, head of policy and research at the Common Weal think tank, also made the case for a broader reconsideration of Scottish Government policies in light of the climate emergency, saying: “The case for all policies to be reviewed in light of environmental policy is increasingly vital and I’m glad to see the Scottish Government has started to recognise this.

“Going forward, I would like to see further analysis of policies (all policies; not just aviation) with a spotlight on the environmental impact. However further reforms take place, they should have attached an estimate of the change in carbon emissions due to the policy. If the policy will increase emissions then there should be a clear justification of why that increase is unavoidable and the mitigation and damage repair fully costed into the policy. Think of it as a policy calorie count.”