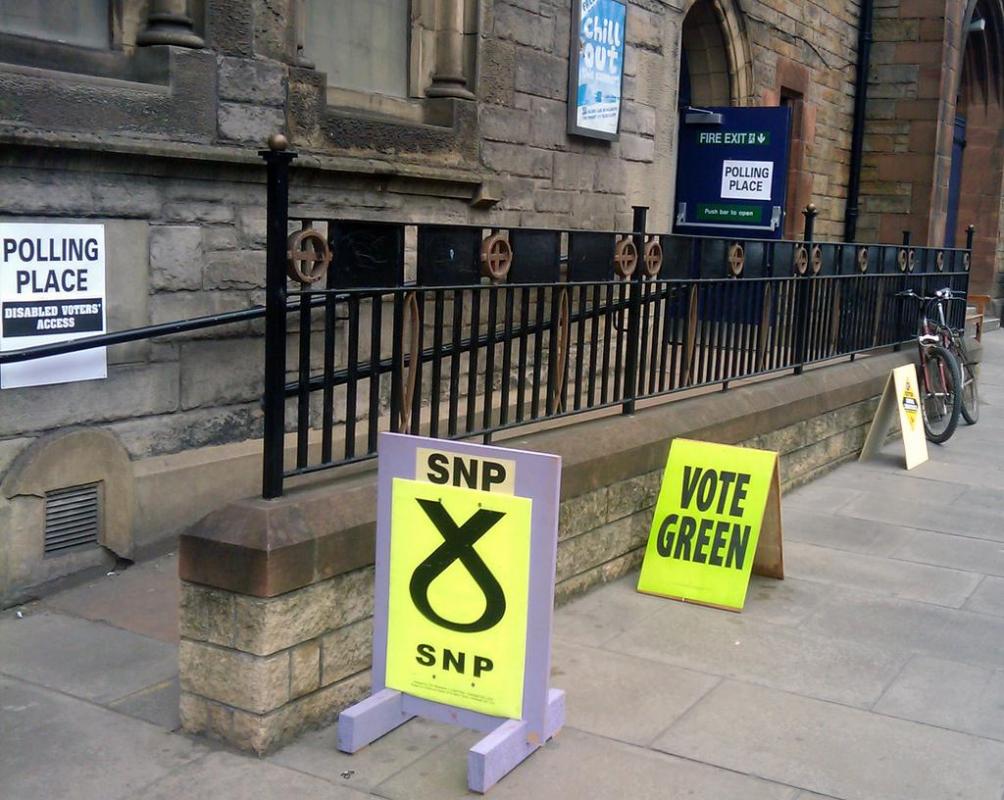 SCOTLAND’S main political parties have reiterated their campaign pledges with less than 24 hours until polls open for the UK General Election 2015.

In Scotland – where Labour and the Scottish National Party are set to compete for the majority of seats – First Minister Nicola Sturgeon and ex-Prime Minister Gordon Brown took centre stage.

Sturgeon, who visited a nursery in Livingston in a final pre-election campaign event, said: “With less than 24 hours until the polls open, Scotland has the opportunity to have more power and influence at Westminster than ever before.

“Over the past weeks and months, SNP supporters across the country have worked tirelessly to spread our positive message of progressive politics to benefit Scotland and the whole UK.

The most recent opinion polls suggest that the SNP are set to make gains across Scotland, although party supporters say they are taking nothing for granted.

Repeating party plans to end Westminster cuts, scrap Trident and keep the Tories out of Downing Street, she added: “On Thursday morning, Scotland has the opportunity to make its voice heard at Westminster like never before. I know that a strong team of SNP MPs will have Scotland’s interests at heart first, last – and always.

“In these final hours I will be campaigning tirelessly to get the message out. And I truly hope that Scotland will unite to put its trust in the SNP to bring about the progressive change that people across the UK are waiting for.”

Meanwhile retiring MP Gordon Brown repeated the spectacle of his passionate pre-union address, which supporters of a No vote claim turned the tide against independence last September.

Brown said: “If you want to vote for social justice there is no other party, the Conservative Party don’t support social justice do they? Every vote counts and it has to be a Labour vote. I find it perverse logic for the SNP to say you can have a Labour government without voting for Labour candidates.”

He added that the controversial decision of Ed Miliband to rule out working with the SNP was based on principle rather than an attempt to win votes.

“The reason why we can’t do a deal with SNP is not expediency, it’s on principle. We can not have a deal, or a compromise, or a tie-in with a party that doesn’t share the principles of solidarity,” Brown claimed.

Meanwhile Conservative leader in Scotland, Ruth Davidson MSP, claimed that both Labour and the SNP were increasing the prospect of independence.

In a speech in Edinburgh’s Dynamic Earth, Davidson will claim that the Tories are the party for Unionists.

She said a Tory vote supports “a party that is rock solid, 100% behind the union, and will never do anything to put that in danger. And the truth is that we do face a danger again – of a nationalist party which is walking all over other pro-UK parties in Scotland.”

Lib Dem Minister Danny Alexander predicts that the Liberal Democrats defeating Alex Salmond in Gordon will be the “biggest surprise” of the election.

Polling opens from 7am and closes, to new polling station entrants, at 10pm on Thursday 7 May.