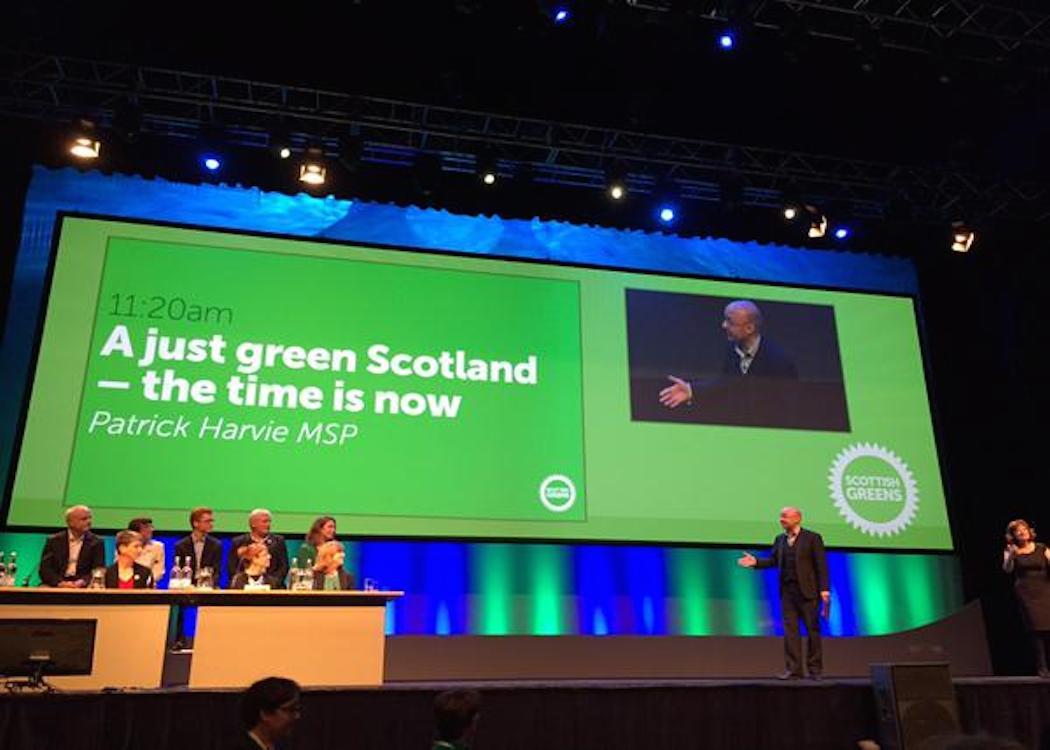 A BIG CONTINGENT of Green MSPs can push a future Scottish Government towards more progressive policies, according to co-convenor of the party Patrick Harvie MSP.

Harvie, addressing 700 party delegates in Glasgow, argued that the Scottish Green party had been a constructive and effective voice in influencing the Scottish Government since the establishment of the Scottish Parliament.

The party will aim to target ‘list votes’ in the election next May to increase its number of MSPs.

“We should be proud of the pressure we brought to bear,” Harvie said.

He outlined rent controls in the private tenant sector, moratoriums on fracking and underground coal gasification , the climate fund and football fan ownership as areas where the Green Party and others persuaded the Scottish Government to act.

“That wouldn’t be happening without Green party action,” he said.

Harvie also announced that the Greens will call for 6,500 new apprenticeships focused on energy efficiency and home insulation as part of the new Scottish Parliament budget.

“We will push for this priority in the forthcoming Scottish budget, which we engage with constructively every year, and we will ensure it is a priority as we head into the 2016 election,” Harvie said.

The co-convenor of the party focused on the Greens’ traditional strength of environmental policy, claiming that Scotland “remained over exposed to this carbon bubble” which is “not only unfair but completely unsustainable”.

The Greens support a transition plan from fossil fuels towards greater investment in renewable energy.

Harvie was also scathing of Theresa May’s recent anti-immigrant speech , as well as the offers of the Conservative, Labour and Liberal Democrat parties.

He said May, who said it was impossible to have a “cohesive society” with the level of UK migration, was “willing to exploit, to tell the lie that it is refugees and migrants that put pressure on public services”.

It was the “most despicable speech from a UK Government minister” he had ever heard, he said.

On other parties, Harvie said he wished the Labour supporters of Jeremy Corbyn well – but said the new leader had more in common with the Green Party than MPs from his own party.

He mocked the Liberal Democrats’ claim to be “militants for reasonable people”, while saying the Tories were “continuing an all out assault” on the welfare state.

Harvie took a more balanced approach to the SNP, who he described as having a “mixed record” including successes on abolishing tuition fees and establishing world leading climate emissions targets.

However, he said the Scottish Greens would push for further action to protect college places, reform the “rubbish” council tax, and take action on corporate tax avoidance.

The Scottish Green conference, which takes place over Saturday-Sunday 10-11 October, is focused on building a campaign towards the 2016 Scottish elections.