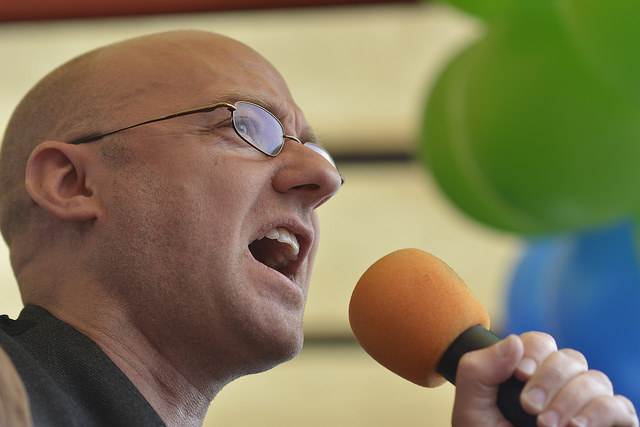 PATRICK HARVIE, Glasgow MSP and co-convener of the Scottish Green Party, has lauded his party’s achievements in setting the political agenda and pushing the Scottish Government to adopt more radical policies, but says tax reform is the only way to guarantee continued Green support for the SNP.

Addressing the Scottish Green Party’s autumn conference at Edinburgh Napier University, Harvie laid particular emphasis on what the Greens have achieved in opposition while supporting the SNP’s minority government, such as John Finnie’s proposed equal protection bill, Mark Ruskell’s 20mph speed limit bill, and the reversal of £160m in cuts to local councils, which was successful negotiated during the 2016 Scottish budget.

“The list of Green achievements at Holyrood is long and getting longer,” Harvie told the conference in his address. “We’re leading the change on issues from air pollution to rent control, and from the fracking ban to the announcement of a publicly owned energy company and it’s clear that the positive Green agenda we’ve been pushing for years is making real progress.

“From our earliest days, long before devolution and fairer voting systems, we have pushed at the edges of what’s politically possible and forced others to respond.” Scottish Green co-convener Patrick Harvie

“With support growing for Green campaigns like our bills to protect children from violence and to make 20mph speed limits the norm, and for core Green ideas like universal basic income and Land Value Tax, it’s clear that we have much more progress ahead.

Harvie also placed their Greens’ accomplishments in the context of the party’s history, highlighting their achievements as a minority party in changing the political mainstream.

Harvie continued: “But leading the change is what Greens have always done. From our earliest days, long before devolution and fairer voting systems, we have pushed at the edges of what’s politically possible and forced others to respond.

“We were the first to call for meaningful action on issues like climate change, radical land reform and equal marriage, and these are now mainstream – though it often takes the rest of the political landscape a decade to catch up.”

“Other parties will no doubt still take their time to catch up, but the radical Green agenda will keep moving the political agenda.” Scottish Green co-convener Patrick Harvie

Harvie echoed the arguments of First Minister Nicola Sturgeon regarding a post-Brexit ‘power grab’ by Westminster, in which powers returning from the European Union will not automatically be devolved to the Scottish Parliament, referring to it as “recklessly destructive”.

Harvie said: “Now, with critical challenges ahead like the chronic inequality in our society, the continuing environmental crisis and the recklessly destructive Brexit power-grab, we must respond with practical ideas, but also inspire people with a vision of what’s possible.

“We must never stop pushing at the boundaries; we must never become the kind of party that tries to win by offering a safe, unchallenging middle-ground agenda.

“We’ll keep leading the change in Scottish politics, advocating investment in the post-oil economy that lies ahead, finding new ways of sharing our wealth more fairly and living within environmental limits. Other parties will no doubt still take their time to catch up, but the radical Green agenda will keep moving the political agenda in the right direction.”

“We can’t do any of that without tax reform. Let’s cut tax for low earners, and reduce inequality.” Scottish Green co-convenor Patrick Harvie

Despite supporting the Scottish Government in some respects, Harvie argued that tax reform is the “only way” the minority SNP administration can expect Green support for the 2018-19 budget, and repeated his consistent position that the Scottish Government must drop its policy of tax cuts for the aviation industry and frequent fliers.

Harvie said: “Don’t just pause ADT cuts. Cancel them. The SNP have no case environmentally, socially, economically. Even in simple transport terms there are bigger priorities. ADT cuts are now on hold. It’s time to scrap the policy altogether.

“We also need to see public sector pay rise above inflation and funded because merely scrapping the cap without providing the resources will change nothing, we need local authorities funded to restore lost value, and we need investment in low carbon infrastructure to hit 70 percent by the end of this parliament.

“We can’t do any of that without tax reform. Let’s cut tax for low earners, and reduce inequality. Greens are clearly leading the change on tax policy. We have a very clear message for the Finance Secretary. This is the only way you’ll get Green support for the budget.”