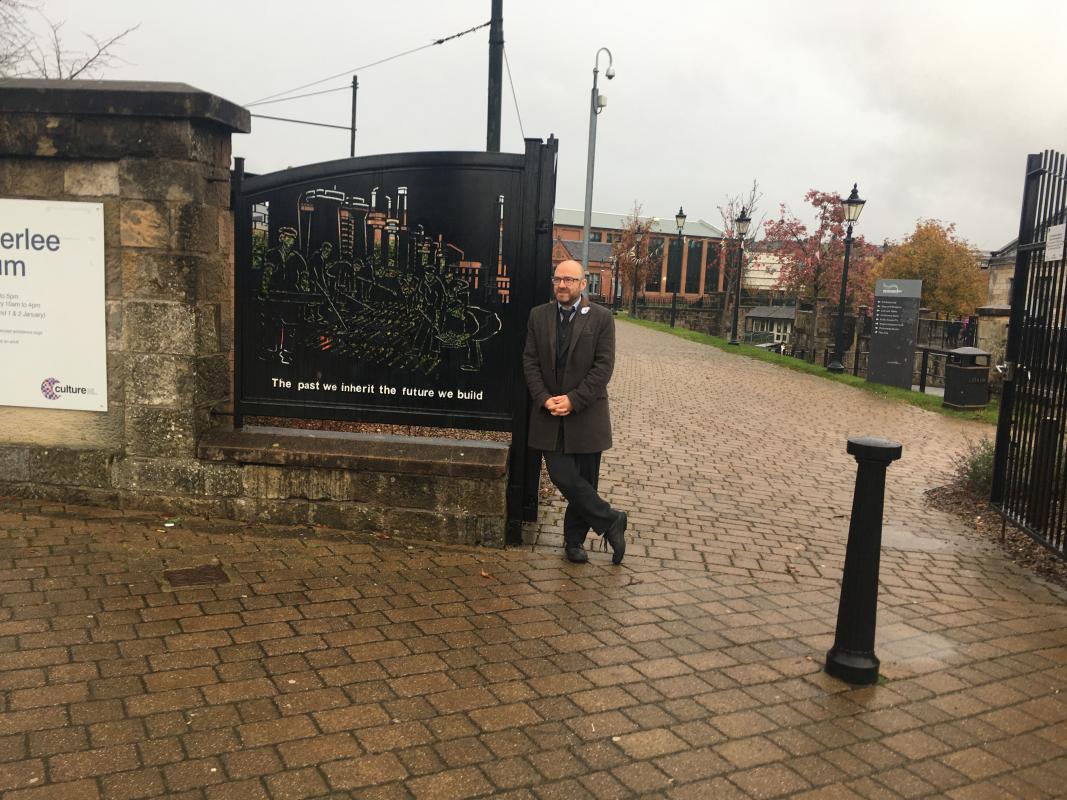 SCOTTISH GREEN co-leader Patrick Harvie MSP has called for stronger action and investment by the Scottish Government in the renewables industry and argued that this would help make the case for an independent Scotland.

Harvie made the comments following the publication of a new Scottish Green Party policy paper on ‘Re-energising Scotland’s Manufacturing Industry‘, which was launched on Monday (4 November) at the Summerlee Industrial Museum in Coatbridge (pictured).

The Green paper is based on a report by the New Economics Foundation on ‘Re-energising Manufacturing’, published on the same day. The recommendations of both the Scottish Greens and the New Economics Foundation include the creation of a Scottish Energy Development Agency, supporting domestic demand for renewables, promoting and funding training for workers, localising industrial strategy, and providing funding to enable a ‘just transition’.

Given that energy policy, including subsidies for renewables, is reserved to Westminster, the Scottish Greens paper also argues that “independence would best allow Scotland to grow and invest in the green industries we need” and that “in the meantime the Scottish Greens are calling for urgent devolution of energy subsidies”.

Speaking to CommonSpace, Harvie said said that Scottish politicians had not been able to influence policy in the UK as a whole and that this underlined the need for Scotland to gain full control of energy decisions.

Harvie said: “Scotland has a clear set of interests around things like how the price of grid connections is calculated, so we can get our islands connected so they can produce renewables and put that onto the grid; issues around how the electricity system is regulated; the subsidies regime for renewables.

Harvie added that working across Great Britain and the rest of Europe would remain important, but that the UK Government had so far failed to prioritise Europe-wide initiatives such as the creation of an electric grid across the EU. “The UK don’t seem to have any interest whatsoever in putting those issues front and centre in the debate. And I think Scotland would,” he said.

In the meantime, Harvie argued that the Scottish Government has the power to take a number of important actions, such as those laid out in the New Economics Foundation report, and that doing so would strengthen the case for independence.

He said: “Part of the case we should be making about the question about powers and independence is demonstrate to the people of Scotland, by pushing as far as you can within the powers of devolution, the potential of what we could do with the full powers of independence.

“The fact that electricity system and the regulation of it is reserved hasn’t prevented us from making progress on increasing the proportion of renewables that are on the grid.

“It hasn’t prevented us from meeting a lot of the targets that have been set over the 20 years of devolution. You’ve seen a pattern of ambitious targets being set and people pouring scorn it saying ‘that can’t be done’ and we’ve overachieved the targets.”

This success, he said, should be replicated and taken further if the Scottish Government is to meet its target of achieving a net zero carbon economy, while ensuring that industries and workers are supported to make the transition to renewables.

Harvie continued: “We want to avoid the idea that we can just swap a bunch of fossil fuel multinationals for some renewables multinationals – we want to change the ownership structure as well.

“We have a just transition commission but we don’t yet have any money being spent on making that transition a reality. The kind of high level discussion which the commission is having is absolutely needed, but it needs to be brought into a practical programme of actions and it needs to be funded as well.”

This, Harvie said, should take the form of a a delivery group which would start to “put some of these ideas into practice as opposed to just generating ideas” and a Just Transition Fund. The Fund would allow employers, local authorities and trade unions could bid into in order to allow workers to retrain and union representatives to engage with the processes and policies.

The Scottish Greens are “unashamed in saying that the public sector has a pivotal role to play” said Harvie, adding that this was “one of the most important differences” between his party and the Scottish Government.

He said: “We need an interventionist approach to the power of the state – both the national and the local state have a role to play in shaping the future direction of the economy.

“The Scottish Government are facing the right way but they’re not using the power of the state, they’re not saying that rebuilding the public sector is part of the necessary path to get us to where we need to be.

“That’s the kind of area that we want to put them under pressure on, not just in the weeks leading up to the UK election but in the lead up to the Holyrood election and in the years to come.”

Summerlee Industrial Museum in Coatbridge was chosen for the launch of the paper, Harvie explained, in order to reflect the fact that Scotland “doesn’t just have to be a country of consumers”.

“We need to be seeing communities like this one, which has a rich industrial heritage, being given the power to invest in their industrial future, rather than just seeing our economy as one of consuming things that are produced elsewhere to standards that we don’t set or control,” he said.

In order to do this, the Green paper, echoing the recommendations of the New Economics Foundation report, urges the Scottish Government do more to ensure that supply chains for the renewables industry are met with local content, including through the leasing process. As the operation of the Crown Estate is devolved, the Scottish Government has the power to attach conditions to the granting of offshore wind leases.

The Sumerlee Museum commemorates the history of industries, such as coal mining, which were once huge job creators in Scotland and whose loss caused lasting damage to communities where comparable employment opportunities were not created in their place.

Harvie said history was one which must be learned from in planning for a zero-carbon economy. He said: “Economic change has happened already, economic change will continue to happen. It’s only when you plan for it that you can minimise the harm and maximise the opportunities.

“If you look at previous waves of deindustrialisation, at stuff that happened during Thatcherism when I was growing up, that was simply communities being left on the economic scrap heap.

This is what the focus on a just transition is intended to avoid, but Harvie said, unless sufficient public investment is provided, there is a “danger” of Scotland “seeing that happen on a grand scale again as we move away from fossil fuels”.

Harvie also responded to debates which have emerged online around the role of unions in securing a just transition after a Member of the European Parliament for the Green Party of England and Wales, Molly Scott Cato, tweeted criticism Labour’s reference to unions in its Green New Deal this Sunday.

Scott Cato said: “Check the small prin of Labour’s 2030 pledge! ‘In collaboration with the trade unions and the scientific community, [Labour will] work towards a path to net zero carbon emissions by 2030, guaranteeing an increase in good unionised jobs in the UK, and the cost of which would be borne by the wealthiest and not the majority; and implementing this target into law if it a achieves a just-transition for workers.’

“So many caveats to keep the unions happy. Total contrast to The Green Party’s 100 per cent commitment to net zero carbon by 2030.”

The tweet garnered some negative attention among a number of Twitter users, including Labour members, who perceived the comments as a criticism of the involvement of unions. However, Patrick Harvie said he believes that Momentum activists were “slightly misrepresenting” what Scott Cato had said.

He said: “It’s an election and maybe it’s understandable that some Momentum activists are trying to pretend there is some kind of disjoint between what the Greens are saying and what the interests of the trade unions are.

“Molly’s a strong supporter of trade unions, she has been for all of her life. I think what she was saying was that Labour’s approach to what they’re calling the Green New Deal… I don’t think they’re joining the dots.

“The transformation that we need can’t be contingent on anybody else’s permission. The question that the government has to ask is how can we make sure it happens in a way that serves the public interest, and ensures that the industries we see growing are going to be unionised.”

Harvie added that this should be done “alongside the trade union movement” and that there was “a huge appetite for this”.

The policy paper released by the Scottish Greens today stresses that the engagement of trade unions will be “critical to ensure that jobs are not just ‘green’ but also ‘good’”.