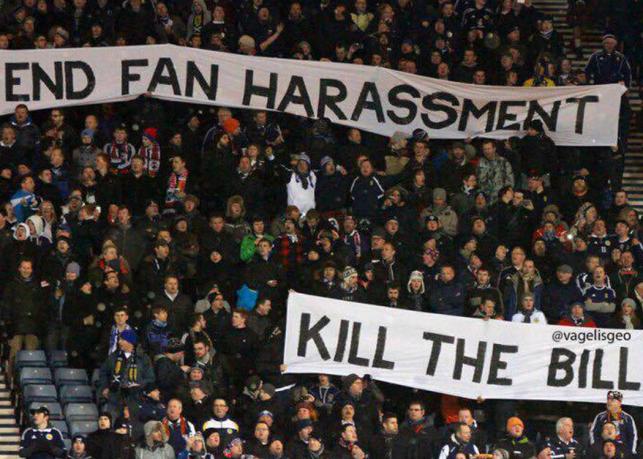 THE Scottish Government revealed plans last week to lodge a review of hate crimes and has included in this the much-maligned Offensive Behaviour at Football and Threatening Communications (Scotland) Act 2012.

This legislation has haunted the government from its conception, having been poorly thought out, poorly drafted and brought about for entirely the wrong reasons. This was legislation for legislation’s sake; a political reaction during a tumultuous period for political gain, with scant regard for the reasoned criticism of experts or for the concerns of the football supporters whom would be caught in its headlights.

When the government got the headlines it sought, the small print did not matter. The inevitable damage that this act would inflict upon the lives of football supporters would be of the collateral variety.

This was legislation for legislation’s sake; a political reaction during a tumultuous period for political gain, with scant regard for the reasoned criticism of experts.

When the bill went to vote in Holyrood, it became the first piece of legislation in the history of the Scottish Parliament which was forced through without any cross-party support. The criticism levelled then by the opposition is much the same as it is now.

Laws should apply universally. Freedom of speech demands that people should not be arrested for merely expressing views or sentiments which some might find distasteful or offensive. The argument has never been about sectarianism, racism or any other form of hate crime as such acts were already criminal previously.

When the Tories and the Green Party are in agreement that legislation is not fit for purpose, alarm bells should be ringing. If this does not raise your levels of concern, perhaps the protests of Liberty (the UK’s leading civil rights organisation), BEMIS (an umbrella group which advocates for the rights of ethnic and cultural minority groups) or the Law Society of Scotland might do the trick.

Despite these concerns, the legislation was enacted to a background of incessant protests of football supporters, who demonstrated their dismay in football stadiums across the country.

We are now reaching the five-year anniversary of the OBFA becoming law and many supporters’ dismay has become a deep-seated resentment of their treatment. The critics of 2011 feel both disheartened and vindicated as their worst fears about this law have been realised.

The argument has never been about sectarianism, racism or any other form of hate crime as such acts were already criminal previously.

The Scottish Human Rights Commission felt compelled to report the Scottish Government to the UN Human Rights Council in 2016 due to concerns surrounding this law. The impact that this law has had on primarily young, working class men has been lamentable.

Football supporters have been arrested for swearing. Dawn raids have taken place at the homes of people accused of the expression of legitimate political opinion. Careers have been wasted, relationships severed and many lives have been devastated as normal football fans have been dragged out of the stands or out of their beds and through the Scottish criminal justice system.

The embarrassing conviction rate demonstrates that many of these people are subsequently found not guilty, but the reality is that such a verdict does not reverse the damage which has been done.

As a campaign group, Fans Against Criminalisation fought for these people to have the opportunity to be able to tell their stories as part of a review process.

We argued that all stakeholders, including fans and the notable bodies who were so critical of the legislation to begin with, should have the opportunity to express their concerns as part of a full and review, which the government was bound to do in 2015.

Regrettably, the government reneged on this promise, presenting only a piece of research carried out by the University of Stirling and a highly-skewed, and poorly interpreted opinion poll carried out by YouGov as their ‘review’.

While Justice Minister Michael Matheson believed this to account for a full review, the University of Stirling went out of its way to distance itself from his claims by publishing a statement on its website explicitly stating that the publication was not intended to review the success of the legislation.

When Fans Against Criminalisation (FAC) lodged a petition for a full review, the response was particularly blunt as a governmental spokeswoman stated that “the Scottish Government does not have any plans to carry out a further review at this time”.

The Government had no intentions of listening to the concerns of stakeholders on the matter again. It now appears that such arrogance from the government has subsided somewhat and has been replaced by delusion.

As the SNP lost its majority in the Scottish parliament at last year’s elections, it can no longer simply do as it wishes. Its less strident tone in regard to the Offensive Behaviour Act has to some extent reflected this, however, it seems to have either not noticed or opted to deliberately ignore the fact that the opposition parties have already voted in favour of James Kelly MSP’s bill to repeal the act in a motion tabled by Douglas Ross MSP.

Football supporters have been arrested for swearing. Dawn raids have taken place at the homes of people accused of the expression of legitimate political opinion.

The truth is that for the Scottish Government to now be championing a review is hypocrisy of the highest order. This cheap political stunt represents absolutely nothing more than an attempt to subvert the will of the Scottish Parliament.

It had the opportunity to reverse course when experts of various backgrounds were lining up to submit evidence to the Justice Committee about the flaws inherent within their plans back in 2011. It has had ample opportunity to fully review this legislation between that point and the summer of 2016, as fans’ lives were being ruined and as criticism mounted.

It repeatedly refused to budge an inch from its position that it had held a review and that the Act was working. For it to launch a review now is utterly disingenuous. This is a delaying tactic, designed to keep James Kelly’s Bill at bay for as long as possible and to keep this dying Act on life support for a little bit longer as the government scrambles to save face.

Once again, the damage of these political games will be wrought on the football supporters who will be needlessly criminalised in the meantime. It is somewhat difficult to distinguish if the attempts which have been made to justify this manoeuvre are founded in delusion or in deceit.

The truth is that for the Scottish Government to now be championing a review is hypocrisy of the highest order. This cheap political stunt represents absolutely nothing more than an attempt to subvert the will of the Scottish Parliament.

Minister for Community Safety and Legal Affairs Annabelle Ewing has stated that the government is unwilling to repeal the Act without a “viable alternative”, echoing what appears to have been the SNP party line for the last few months.

John Mason MSP perhaps decoded this language for us all, though, when he tweeted in relation to the Act that “bad legislation is better than no legislation”. Legislation for legislation’s sake. Much the same now as it was in 2011.

Legislation, that is, which Liberty deems a risk to our civil liberties, which BEMIS deems a threat to minority groups and which the Law Society deems to be bad law. With the Bill for the repeal currently going through the Scottish Parliament, there is no longer a requirement for a review just so the arguments of 2011 can be repeated only for the government to disregard the evidence submitted.

This Act offers additional protection to precisely nobody, it creates even greater ambiguity in the law and is needlessly criminalising a generation of football fans. It will not survive and there is no merit in trying to save it; to do so will only prolong the agony.