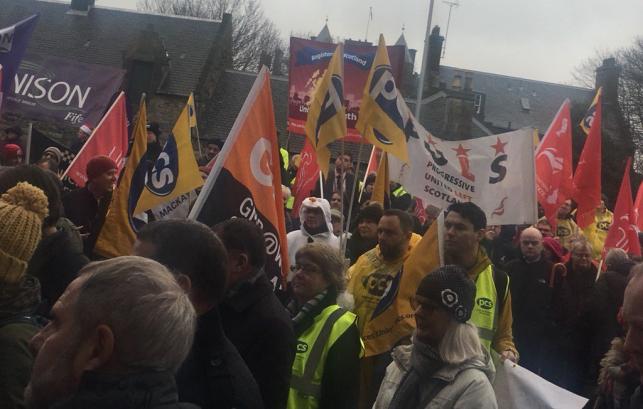 David Thomson reports for CommonSpace from the first day of the STUC Congress in Aviemore, where the teachers union EIS said it was willing to strike for a 10 per cent pay rise

THE SCOTTISH Trade Union Congress (STUC) are calling for public sector workers to be paid 10 pounds an hour as part of a new long-term pay policy to tackle pay loss and cost of living after a decade of austerity.

UNISON Scotland, STUC General Council, Educational Institute of Scotland (EIS) and the Public and Commercial Services Union (PCS) backed the motion at the first day of the STUC Congress that is calling on both the UK and Scottish Governments to fund a pay boost.

Scottish public sector workers have seen on average a 16% real terms cut in wages since 2010.

UNISON’s Brenda Aitchison – who seconded the motion at Congress – told Congress that it is not fair that there has been a real-terms cut in public sector workers pay over the last ten years due to a financial crisis that they did not create.

“How can it be fair to cut in real terms our pay for so long when public sector workers did not create the financial collapse?

“As a movement, we know there is no such thing as deserving and undeserving public sector workers” when it comes to pay . We all serve, we all deserve better pay.” UNISON’ Brenda Aitchison

“Austerity and austerity-light has to end. You all know the grim statistics, starving of funding and resulting fall-out, less jobs, stretched to breaking point services, lost services, and poverty wages. This is the politicians’ shame – those who implement cuts.

“It is not outrageous for us to demand an inflation-busting pay rise and establish a £10 per hour minimum wage. We do not need any more empty praise; we need an increase in our living standards.

“As a movement, we know there is no such thing as deserving and undeserving public sector workers when it comes to pay. We all serve, we all deserve better pay.”

The Scottish Government’s 2018-19 budget committed to a gauranteed minimum three per cent pay rise for public sector workers earning below £36,500 per year, ending the one per cent pay freeze that had been in place since 2013, but with inflation at 3 per cent many public sector trade unions are demanding more.

Larry Flanagan from the EIS told Congress that what the Scottish Government has offered is “still a pay cap”.

Flanagan added that his union have put forward a 10 percent pay claim to restore some of the lost earnings over the last ten years.

He said: “10 percent will give Scottish teachers an equivalent pay scale to college lecturers.

“The college lecturers only had their pay scale because they took six days of strike.

“When we are discussing it in our schools, we are saying to members that they are lessons to be learned.

Flanagan added that his union is willing to ballot its member for industrial action in support of the EIS campaign for a 10 percent pay increase.

Flanagan added: “We are confident that we can build a campaign amongst our members to take whatever action is necessary to deliver the 10 percent.

Suzanne Wright from the Moray Trade Union Council welcomed the Scottish Government decision to lift the one percent public sector pay cap, but Wright says that it does not go far enough due to the rise in the cost of living.

Wright said: “While living costs have risen by 22 percent since 2010, the pay of public sector workers has only risen by four percent.

“The effects of understaffing, low morale amongst staff and the inability of the public sector to recruit and retrain are at a critical level with services struggling to be delivered.

“All of this at a time when public service workers have been lorded over and commended for their work in protecting the public following recent terrible events.”

Wright added that it is the right time to demand that “our public services will be well funded and staffed by workers who are well paid.

Wright said: “Now it is the time to demand that the value society says it places on these services is shown in practice.

Picture courtsey of the STUC