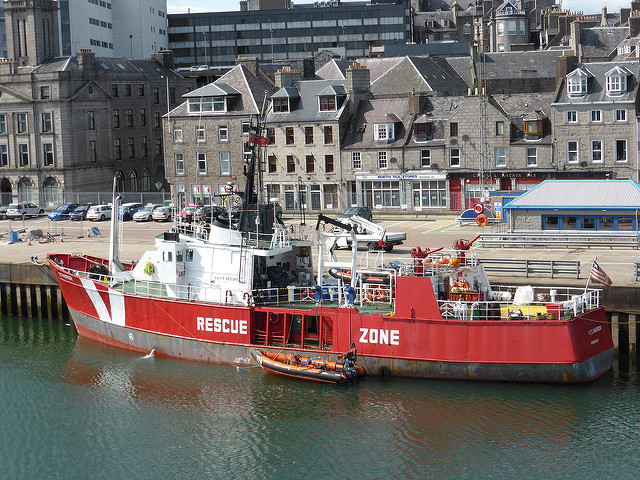 THE NATIONAL UNION OF RAIL, MARITIME AND TRANSPORT WORKERS (RMT) carried out protests in Aberdeen today (26 February), calling for the enforcement of the national minimum wage (NMW) for seafarers on commercial vessels in the North Sea.

The protest follows anger from RMT after the admission by the Chamber of Shipping that the UK Government’s guidance on fair pay would have no effect on the workers in question.

Speaking to Maritime Global News in January, the Chamber of Shipping revealed: “The guide does not amend the law and there has been no change in the entitlement of any seafarer in respect of the National Minimum Wage or the Equality Act.”

The UK Government guidance was initially provoked by mounting concerns regarding unfair working conditions and low pay on ships that were registered outside of the UK, but nevertheless operate within UK territorial waters. The guidance stated that any offshore workers operating in UK waters should be paid at least minimum wage.

In response to the Chamber of Shipping’s admission, RMT representatives said that the guidance on seafarer pay was “shot full of holes” and would have “no impact on low pay”, and accused the UK Government of ignoring problems which are “driving the decline of UK seafarer numbers and the national maritime skills base”.

“Domestic seafarers cannot and should not have to compete with pay below the legal minimum in offshore supply, offshore renewables and decommissioning.” RMT general secretary Mick Cash

RMT-led protests took place outside the constituency office of Ross Thomson, Conservative MP for Aberdeen South, as well as the Aberdeen headquarters of Oil and Gas UK. Chanting “Aberdeen, port of shame,” the protestors said they were standing against “the exploitation of seafarers”.

“Our demonstrations in Aberdeen demand a response from the local MP, Ross Thomson to the avoidance of the NMW which Aberdeen-based companies are engaging in through their crewing policies on offshore standby and supply vessels.

“Domestic seafarers cannot and should not have to compete with pay below the legal minimum in offshore supply, offshore renewables and decommissioning.

“Instead of phony guidance, the Tory Government must apply and enforce UK NMW pay rates for seafarers on all domestic and North Sea energy routes, in line with the RMT stated and re-stated in the Legal Working Group on Seafarers and the NMW.”

“We demand that the local Tory MP stop waxing lyrical about tax cuts for oil and gas companies and start addressing the loss of jobs and skills in Aberdeen.” RMT national secretary Steve Todd

“We demand that the local Tory MP stop waxing lyrical about tax cuts for oil and gas companies and start addressing the loss of jobs and skills in Aberdeen from the undermining of employment rights in the North Sea.

“RMT members are also taking that message to the Aberdeen office of the industry lobby group, Oil and Gas UK which routinely defends pay and employment practices that would be illegal on land and does nothing to promote trade union rights in the North Sea.

Speaking to CommonSpace, Kirsty Blackman MP for Aberdeen North said: ”It is unacceptable that in 2018 people working in the North Sea may not always be receiving at least the minimum wage, and the Tories have to take decisive action to improve this situation.

”That is why I – and many others –  have been fighting to bring the plight of underpaid seafarers  to the attention of the UK Government – particularly in light of the ordeal of the Malaviya Seven crew who were stranded in Aberdeen for more than a year.”

”It is unacceptable that in 2018 people working in the North Sea may not always be receiving at least the minimum wage.” SNP MP Kirsty Blackman

The crew of the Malaviya Seven supply ship spent 18 months in port at Aberdeen after the ship’s former owner was liquidated and the vessel was detailed under maritime regulations. In January of this year, a sheriff order that the crew be paid the £714,000 in unpaid wages the crew had been waiting on for nearly two years.

Responding to the protests, Ross Thomson – who was not present at his constituency office at the time – said: “I am always happy to meet to with anyone to discuss issues that affect my constituency.

“There are clearly large numbers of people employed in the oil and gas industry in Aberdeen South, and I have always been vocal in my support for the sector.

“I would be interested to hear the concerns that the RMT Union have on this issue, but I have not been contacted by anyone either locally or nationally.

“We have not, and would not, defend any practices that were not compliant with UK employment law.” Oil & Gas workforce engagement and skills manager Alix Thom

“It is disappointing, however, that the RMT Union have not been in touch with me and have chosen to protest outside my office instead.

“I am travelling to London this morning so will not have the opportunity to go out and engage with them. Had they made an appointment or notified my office, I would be more than happy to do so.”

Oil & Gas UK workforce engagement and skills manager Alix Thom commented on the matter, saying: “Whilst we have not been approached directly, Oil & Gas UK is aware of these plans.

“We have not, and would not, defend any practices that were not compliant with UK employment law, and we continue to work regularly with our members and the unions, including RMT, on employment matters through our work forums.”