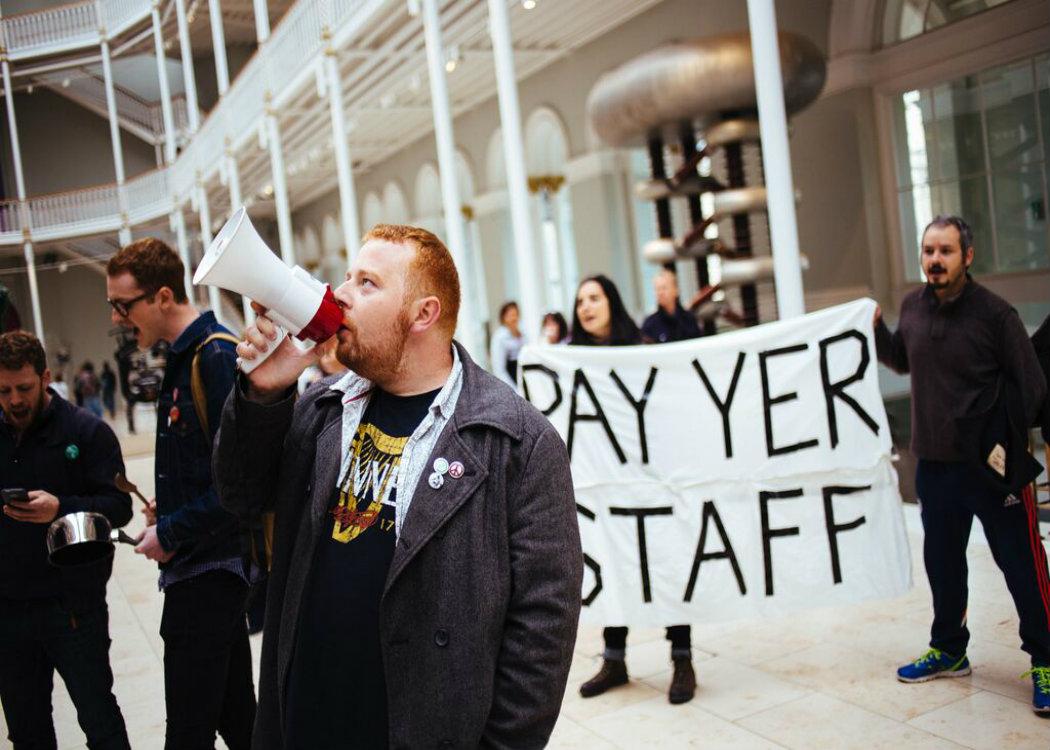 ON SUNDAY 13 September, protesters staged a flashmob demonstration in the National Museum of Scotland over a pay dispute

The campaign was sparked after conditionality was added to workers’ pay, resulting in the creation of a two-tier wage system. The result of this alteration meant that workers who began their position at the Museum later than others would subsequently earn up to PS3,000 less annually than their colleagues, despite working in the same role.

The situation arose in 2010 after the Museum management broke an existing contract agreement, and moved to abolish the Weekend Working Allowance from incoming staff members. The allowance had aimed to provide a safety net for staff earning a low wage, such as cleaners and visitors attendants.

Chris Belous, a protester, stated: “When we found out about the conditions being thrust upon these staff by the management, we were determined to show our support.

“Having the same group of employees on separate conditions whilst they do the exact same job is a deplorable practice. We demonstrated today to call on the museum to end this unfair treatment of staff immediately and to raise awareness of the issue amongst those who use the museum.

“Shamefully, management’s only proposed solution so far has been to suggest workers in receipt of the weekend allowance should donate PS1500 of it to the others.”

Belous added: “The Scottish Government must intervene now to resolve this mess and to ensure these workers get a fair deal. They aren’t asking for anything more than to be treated the same as their colleagues.”

The flashmob demonstration follows 12 days of action , led by the Public and Commercial Services (PCS) union, which was the result of an 18 month long campaign over the removal of the allowance.

A museum spokesperson has said that no pay has been cut since January 2011 and existing terms and conditions have been preserved for all staff prior to this date.

The PCS estimated that 120 union members took part in the strike.