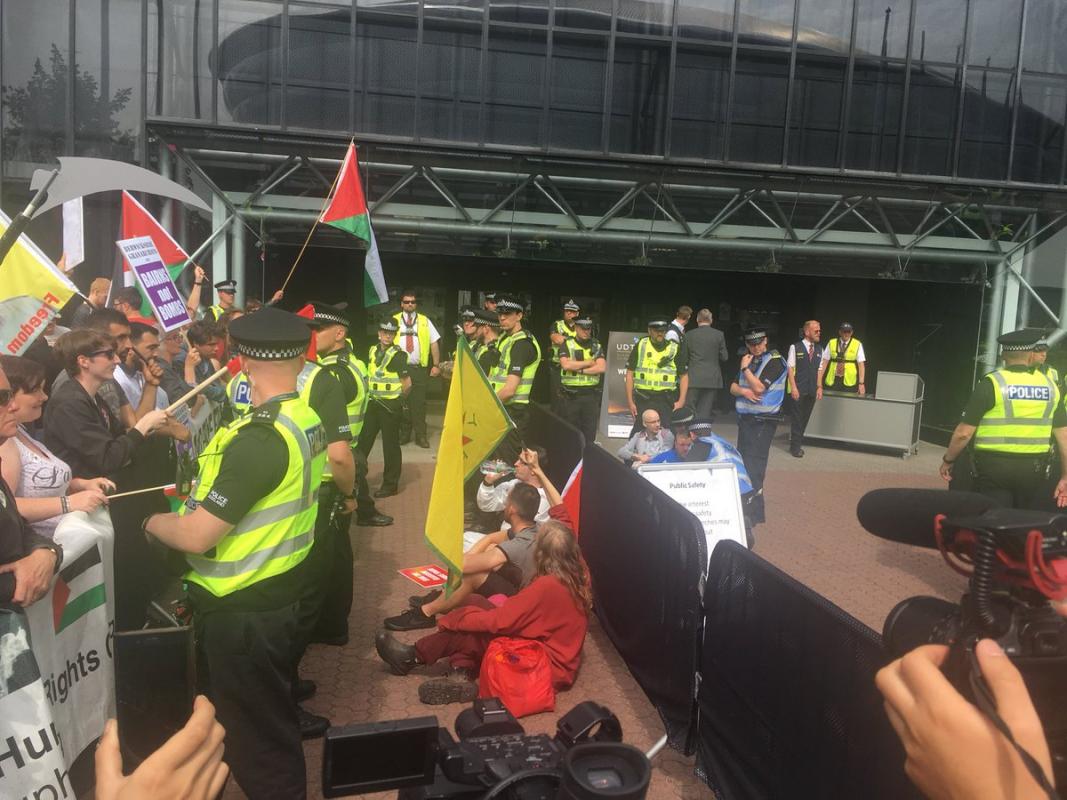 The announcement came as the Undersea Defence Technology (UDT) exhibition, hosted by Glasgow City Council from 26-28 June, came to an end, and was welcomed by peace campaigners who said the SNP-led council should never have hosted the event, the leading sponsors of which are the two main arms manufacturers behind the renewal of Trident nuclear weapons, BAE Systems and Babcock.

Cllr McDonald, who had previously refused to rule out arms fairs in the future at a 17 May Council meeting, made the statement after Green and SNP councillors pressed the Council leadership for an ethical events policy.

McDonald said to loud applause: “We must ensure that we protect our conference and conventions business in what is a hugely competitive global market but we will be doing that in a way that reflects our values… with a new policy and with a new political commitment in place you can be sure this is not the kind of event that comes to Glasgow in the future.”

A spokesperson for the Sink the Glasgow Arms Fair coalition, which has organised the protests against the arms fair, welcomed the news, saying:

“We are delighted to here David McDonald say there will be no more events such as UDT held in Glasgow. It is crucial we continue to put pressure on to make sure this becomes a reality.

“The councils move towards banning arms fairs shows that people power works. We are a collection of grassroots groups and this has only been possible because of all of those who have spoken out and came to protest the arms fair over the past week.

“There are still questions to be answered but we fully support the council taking this policy forward.”

Hundreds protested the UDT exhibition, which was bid for by the previous Labour administration, outside the SECC this week, highlighting the Trident speakers and student recruitment session at the event, as well as equipment on display which has been used in the blockade of the Gaza strip.

The administration had tried to distance itself from the arms fair last week when it removed the People Make Glasgow logo from the UDT website, and SNP cllr Graham Campbell spoke at the demonstration on Tuesday saying the Council doesn’t “support what’s going on in there”.

But campaigners were angered when it was uncovered that arms fair guests were also wined and dine on Tuesday evening in another council owned building, Kelvingrove Art Museum.

At the Council meeting on Thursday, Green councillor Allan Young asked the deputy leader for an update on the proposed ethical events framework for future conference events at the council meeting.

McDonald told Young that the city now needs to “strike a balance” between protecting jobs and “the concerns that were raised in relation to recent events”.

McDonald said he has asked the Convention Bureau, which organises the city’s conferences, to “reexamine its guidelines” so that it reflects that “Glasgow is a human rights respecting city and also matches the values and vision set out in the city charter”.

Responding to the deputy-leader, Young said: “I welcome many of his comments there, especially his commitment to a human rights city. Therefore can I take it as red that in the future we won’t have any more arms fairs like we had this week, which promoted weaponry used in the recent attacks on Gaza. And can I also take for red that we won’t have the private hiring of cultural icons such as the Kelvingrove museum for lavish celebratory dinners for war profiteers?”

SNP Councillor @CeeGraham1 tells us why he’s here at the protest against the #UDT2018 arms fair and responds to some of the criticism of Glasgow City Council over the issue. pic.twitter.com/imiOfKTWzu

McDonald said the city was looking to get to a position that respects all positions and that the administration has made a commitment to go further than the city had in the past.

“What we can’t do though is stop conferences or event organisers from contracting with host venues or accommodation providers, because that is simply not in our gift. What we can do though is ensure we have a policy that matches the city’s characteristics. That is something I’ve committed to in the past and we commit to today,” he said.

Asking for clarification, Cllr Campbell, sought assurances from McDonald that future criteria will alleviate concerns raised, saying “People Make Glasgow, and this is not the kind of business we want to do business with”, leading to McDonald making his pledge on no more arms fairs.

McDonald had previously been accused of a “whitewash” of the UDT exhibition after telling a Council meeting on the 17 May that the event was a “technical exhibition and conference for underwater technology, defence and security”, adding: “It includes topics that range from acoustic modelling through to energy conservation and its use in underwater environments.”

Andrew Smith of Campaign Against Arms Trade, which supported the protests, told CommonSpace: “This is a big victory for campaigners. It is great that Glasgow City Council has listened to people’s anger and is working towards ensuring arms fairs can’t happen in Council property again. This sets a vitally important precedent, which other Councils should follow.

“Hundreds of people took part in protests this week. People from all across the city came together to make it clear that arms dealers are not and never will be welcome in Glasgow.”

Jay Sutherland from Scotland Against Militarism, the campaign against school student recruitment to the army, said: “Scotland Against Militarism welcomes the commitment to making sure these events are not held in Glasgow.  We will continue to build opposition to militarism in whatever form it comes in and wherever it is, but we are glad that Glasgow City Council is finally starting to listen.

“However, me must ask questions about transparency and why an arms fair banquet shrouded in secrecy was held in the Kelvingrove Museum, one of Glasgow’s most iconic council-run buildings.”