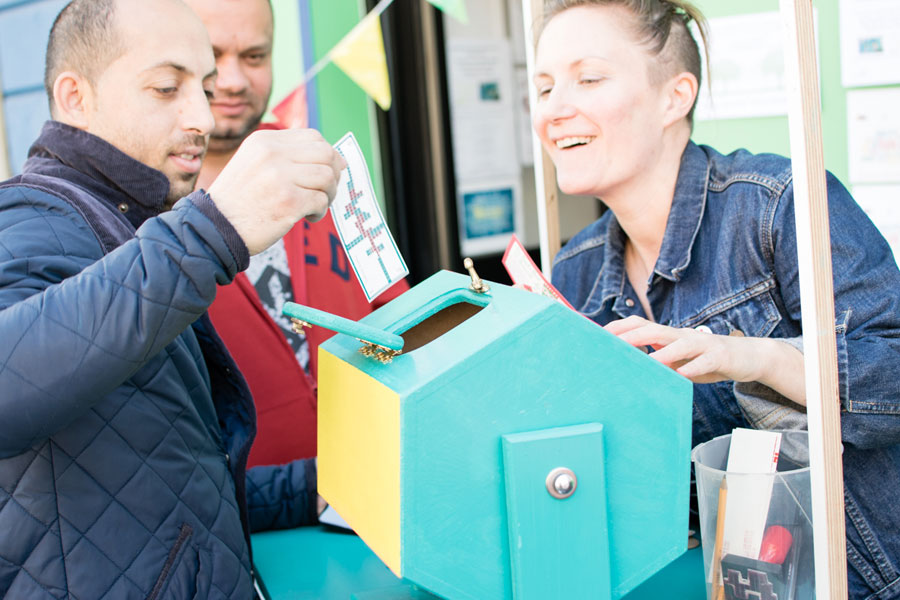 THE People’s Bank of Govanhill, which previously created a local currency for Govanhill, is seeking a permanent base for a swap market.

The swap market is the next stage of a project which started in 2015, when artist Ailie Rutherford was completing a residency at Govanhill Baths. Rutherford developed the idea of a local currency, which could be purchased with pay-as-you-can rates of Sterling and exchanged for goods and services in the community on select dates.

Ailie Rutherford, founder of The People’s Bank of Govanhill has since been working with the local community to develop new ideas for the recognition and exchange of what she calls “love hours”— time, skills and knowledge which are unpaid, but have significant value to communities.

Rutherford told CommonSpace that while she is aware of other community exchanges, “they tend to focus much more on a straightforward exchange”. The Govanhill Swap Market, in contrast, will not only focus on exchanges of goods or produce, but on “cultural exchange, knowledge exchange, language exchange”.

Two multi-lingual interpreters, Inga Zaiceva and Calina Toqir, are working on the project to ensure that it will be fully accessible to Govanhill’s diverse community.

The idea of a swap market was borne out of conversations and exchange events in the community over the past two years. Since its inception, Rutherford explained, the People’s Bank has become “much more collective and community driven”, and formalised itself as a constituted organisation earlier this year.

“Here was a project that wanted to look at what was good rather than what was bad.  Everyone talks about how BAD Govanhill is.” Brian Morgan

One of the organisation’s new committee members, local resident Brian Morgan, explained why he wanted to get involved: “It seemed to be very different for the area – here was a project that wanted to look at what was good rather than what was bad.  Everyone talks about how ‘bad’ Govanhill is.

“I had also had some interest previously in alternative currencies – and time-banks – and knew what interesting conversations could emerge out of this approach. So it was refreshing community engagement.

“But Ailie has added into this an artistic element, and this is what makes the project unique. I think it has really caught the imagination of many people – and could have tremendous potential for both community and economic development.”

The idea of a time-bank has been a major inspiration for the project, as the group has already run a number of successful “time-bank tombola” events, and hopes to incorporate this into the swap market.

Rutherford explained the concept: “You make a pledge on a note to put in the tombola – for example, ‘I’ll meet you for a game of football in Govanhill Park’, ‘I’ll make jam’, ‘I’ll come for a cup of tea’ – and people make connections with people they wouldn’t have otherwise.”

“There’s a big social element, about bringing people together and finding similarities. Anything at the moment that is positively multicultural is a really good thing.” Ailie Rutherford

Rutherford said she was “amazed” by the “breadth of things people were willing to offer”, and that it convinced her of the need for “a space that allows for those kinds of unexpected things to happen”.

Asked what the organisation hopes to achieve through the swap market, Rutherford said: “It’s about a shift in values, and trying to find ways of valuing everyone’s input and what everyone has to offer.

“There’s an environmental element to it too, about reducing consumption. And there’s a big social element, about bringing people together who wouldn’t normally work together and finding similarities.

“Anything at the moment that is positively multicultural is a really good thing.”

The People’s Bank of Govanhill hopes to find a home in the Victoria Road area in the next few months, with a number of grant applications and fundraising plans underway. It’s a work in progress, but Rutherford said: “I’m confident that we’ll make it happen.”