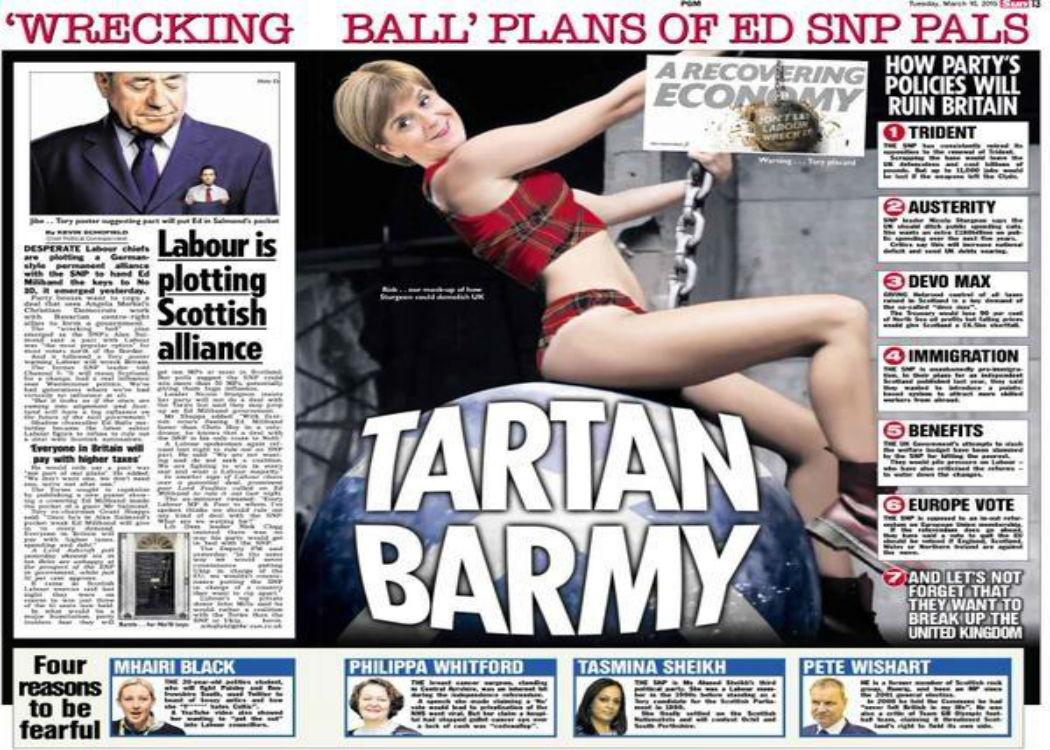 Women for Independence: “It is clear that the Conservatives are not only completely out of touch with Scottish politics, but blatantly sexist to boot.”

CAMPAIGN group Women for Independence has said Prime Minister David Cameron and the conservative party in general has a sexist attitude towards the SNP, as it continually refers to Alex Salmond despite the fact that Nicola Sturgeon is now the leader of the party and First Minister.

In response to the Labour leader Ed Miliband’s continual attempts to get Cameron to commit to a one-on-one televised debate at Prime Minister’s Questions on Wednesday, Cameron said it would be him and Salmond who would “call the shots” after the General Election, and therefore, he said light-heartedly, it should be they who should have a head to head debate.

Cameron repeatedly referred to Miliband being in Salmond’s pocket and hanging on “to the coattails” of the former SNP leader, echoing Tory attack posters which show images of a tiny Miliband in the suit pocket of a giant Salmond.

Salmond stepped down as party leader and First Minister in January, and despite his intention to stand as a candidate for Westminster, he does not plan to be SNP Westminster leader. Sturgeon has said she will be the lead figure of the party at UK level.

“Whether Cameron’s comments in the Commons today were tongue-in-cheek or not, they are yet more evidence of the sexism all around us. When you combine this with the most recent Tory poster – showing Ed Miliband in the pocket of Alex Salmond – it is clear that the Conservatives are not only completely out of touch with Scottish politics, but blatantly sexist to boot.

“The Conservatives, both here and south of the border, need to realise that it is the 21st century, not the 1950s, and women will no longer be silenced in politics.”

With the General Election contest set to be the closest in UK history, focus has turned on Scotland, where the SNP is, according to opinion polls, set to take almost all of Labour’s seats from them in May’s vote.

Cameron ridiculed Miliband at Prime Minister’s Questions for refusing to rule out the possibility of a minority Labour government relying on SNP support to govern after the General Election, saying: “He [Miliband] wants to crawl through the gates of Downing Street on the coattails of the SNP.”

Meanwhile, social media users expressed deep concern on Wednesday after an image in the English version of The Sun (shown above) depicted a scantily clad Sturgeon with the title ‘Tartan Barmy’ next to it.

A number of commentators and politicians, including rival Ruth Davidson, strongly criticised the depiction.