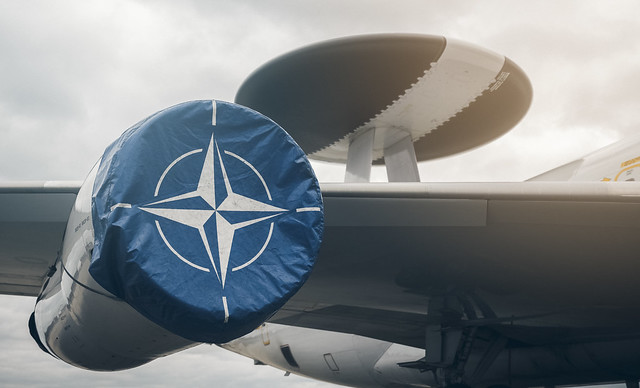 Pete Cannell, anti-war activist in Edinburgh, says that on the 70th anniversary of NATO, a peaceful future where humanity tackles the crises of the 21st century would be one without the western military alliance

NATO was conceived in 1949 at the height of the Cold War, and became central to the standoff with the eastern bloc.  The initial partners were Belgium, Canada, Denmark, France, Iceland, Italy, Luxembourg, the Netherlands, Norway, Portugal, the UK and the USA. Between 1949 and 1990 it carried out numerous military exercises but no offensive operations.

When the Cold War ended, rather than shutting up shop, NATO expanded; the strategic aims of the alliance were redeveloped to embrace a global remit. Membership has increased to twenty-nine, including a number of ex-Warsaw pact nations.  And at the same time it has initiated active military operations, most notably in Afghanistan.  The NATO alliance is the first choice option for the US when considering military operations worldwide.

On 27 March three Edinburgh activist organisations, Radical Independence, CND and Stop the War, joined forces to host an open discussion on NATO .  I’m a member of all three organisations that hosted the Edinburgh meeting.  This article is not a straight report nor is it a summary of the views of the organisations involved.  Rather it’s a personal response to a discussion that was serious, vigorous and exposed both common ground and genuine disagreement.

We are at a moment of deep constitutional crisis.  The integrity of the UK as a state and its relationship with Europe and the rest of the world are in the balance, and the traditional party of big business is riven with dissension.  In amongst all the reporting, comment and debate NATO is rarely mentioned.  This despite the fact that, on the one hand the EU is developing its own military capability, and on the other many Tory Brexiteers want an even closer military relationship with the US and hence with NATO.

Back in 2012, following fierce debate at its October conference, the SNP reversed its long held position of opposition to NATO membership.  Two MSPs quit the party in protest, but since then discussion of NATO in Scotland has subsided.

Some opponents of NATO argue that now is not the time to reignite the debate; that particularly in relation to independence NATO is a peripheral issue, unpopular and not one that can be mobilised around.  I disagree.  There’s a danger that we see NATO through the lens of the past 70 years.  The debate should be recast for the decade to come.

There are three interlinked reasons why we should insist that we don’t want NATO to be part of our future.  The first is simply that NATO is a nuclear alliance that keeps open the option of first use of nuclear weapons.  The US is preeminent among NATO partners and is investing around $3 trillion in renewing its nuclear arsenal.  Russia is responding, albeit on a much smaller scale.  Rather than NATO providing security its policies drive us in the direction of an ever more dangerous world.  New tactical nukes will make nuclear war much more likely.   And from the perspective of Scottish independence can we really join, or stay in, a nuclear club and get rid of Trident at the same time?

Secondly, commitment to NATO locks us in to a militarised economy.  In the 18 years that NATO has been active in Afghanistan, the US alone has spent almost a trillion dollars.  New weapons, for example the F35 fighter, are hugely expensive. Tensions within NATO have resulted from Trump’s insistence that all NATO partners share the costs through contributing 2 per cent of GDP.  Continuing membership of NATO makes austerity a long-term prospect.

However, the third reason to say no to NATO is political and economic.  We face an existential crisis as global temperatures rise.  The window for action is small and effective action requires the mobilisation of human and material resources on a scale only ever seen before at times of war.  Currently the ‘defence’ sector distorts our economy, curtails civil liberties and corrupts our political system.  The priorities of the NATO alliance are at the heart of the sector shaping the infrastructure and much of the organisation for the military industrial complex. The engineering skills and creativity that are currently used to produce weapons are needed for the fight to stop a climate catastrophe.  So rather than continued investment in a nuclear alliance we need to divest from defence and reallocate resources and skills into renewables.

Discussion of a just transition towards a net zero carbon economy is still confined to activists.  This needs to change.  Just transition involves supporting communities and protecting livelihoods, but it also requires democracy, participation and inclusion. Facing up to the real problems that we face has the potential to be popular and liberating.  That’s why we should say no to NATO and do all we can to ensure that NATO’s 70th anniversary is also its last.