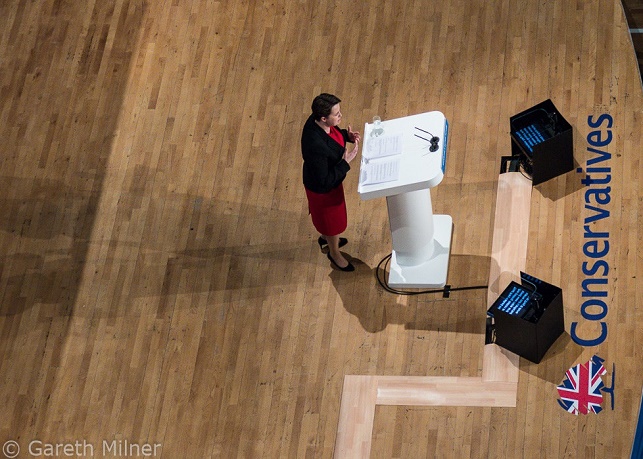 IN light of the Scottish Conservatives' successful election campaign, much has been said of their revival.

They certainly had a great night and all credit to Ruth Davidson for having the boldness to switch from Glasgow to Edinburgh and then go on to win a constituency seat. The party now has 31 MSPs, up from 15 at the 2011 election. Despite this, I still don't believe they have detoxified the Tory brand in Scotland.

The whole reason the party has gained seats is all down to one person, Ruth Davidson. She is certainly one that is at ease with the media, having been a journalist with the BBC in the past.

The whole reason the party has gained seats is all down to one person, Ruth Davidson. She is certainly one that is at ease with the media, having been a journalist with the BBC in the past.

Driving a tank, sitting atop a buffalo, or scoring a great goal at a penalty shoot-out are all things that most politicians either would refuse to do or would do badly. Its hard to imagine Murdo Fraser managing to pull off the task of feeding a journalist a solero for the cameras.

Beyond her common touch are the obvious points in which she differs from the Tory stereotype; she is from a working class background, she is on the right side of 40 and she is gay. So far, so different.

However, when you scratch the surface you can see that that the remainder of the party is nothing like this. Among the 31 Scottish Tory MSPs there are several landowners, at a time when land reform is high up the Scottish political agenda.

One such man is Sir Edward Mountain, who was elected from the Highland list and is a millionaire with land owned in Moray. Another is Alexander Burnett, who took Aberdeenshire West from the SNP. Burnett is head of Leys Estate and North Banchory Limited. The Burnetts of Leys have owned land in West Aberdeenshire dating way back to 1323, when they received a royal land charter from Robert the Bruce. The family built Crathes Castle, where the surrounding lands are still owned by the estate.

However, when you scratch the surface you can see that that the remainder of the party is nothing like this.

Another factor is the gender balance within the new group of Scottish Tories. Of the five parties that won MSPs in the election, the Tories had the lowest number of women standing; just 15 per cent. In the end there were six women elected from a total of 31, so 19 per cent altogether. This is actually less than the UK-wide party, where 21 per cent of MPs are women.

The Scottish Tories have also seemed unable to recruit any of Scotland's ethnic minorities to become MSPs. There are no Sajid Javids or Sayeeda Warsis here. Not that Scotland's other parties did much better, it has to be said, with only Anar Sarwar for Labour and Humza Yousaf for the SNP being elected.

The Scottish Conservatives obviously did their research and their research told them their biggest asset was Ruth Davidson. From then on she was put front and centre of the campaign, often with scant mention of the party name on campaign literature. There were next to no visits from David Cameron, George Osborne or any heavyweights from the UK cabinet.

It seems ridiculous, therefore, to say that the Scottish Tories are mounting a comeback when they had to hide the UK Government from meeting the Scottish electorate.

When Tony Blair and Gordon Brown modernised their party with New Labour they had other talent to rely on and it wasn't left to one person to single-handedly win government. It is hard to imagine the late John Smith not winning the 1997 election, for instance.

Among the 31 Scottish Tory MSPs there are several landowners, at a time when land reform is high up the Scottish political agenda.

David Cameron, for his many faults, has steered the Conservatives in a more socially progressive direction by legalising equal marriage, which was strongly opposed by the old school, rightwing of his party. He had many more liberally minded MPs from the 2005 election intake to help him.

Beyond Ruth Davidson, who else is breaking the mold for the Scottish Conservatives? If she was to be tempted to become an MP and join the cabinet at the UK level I don't see who the Scottish Tories could rely on to succeed her.

When Ruth Davidson was contesting the leadership for the Tories her opponent, Murdo Fraser, called for an autonomous party. To his mind, the Tory brand was toxic in Scotland and it needed to be ditched in favour of Scottish Progressives (no, me neither), a Scottish Business Party, or at the most cringey end of the scale, the Caledonians.

It is ironic that despite losing out in the leadership and seeing his name ideas heavily criticised, Murdo Fraser can now be vindicated. For the Scottish Tories did change their name. They are now Team Ruth.