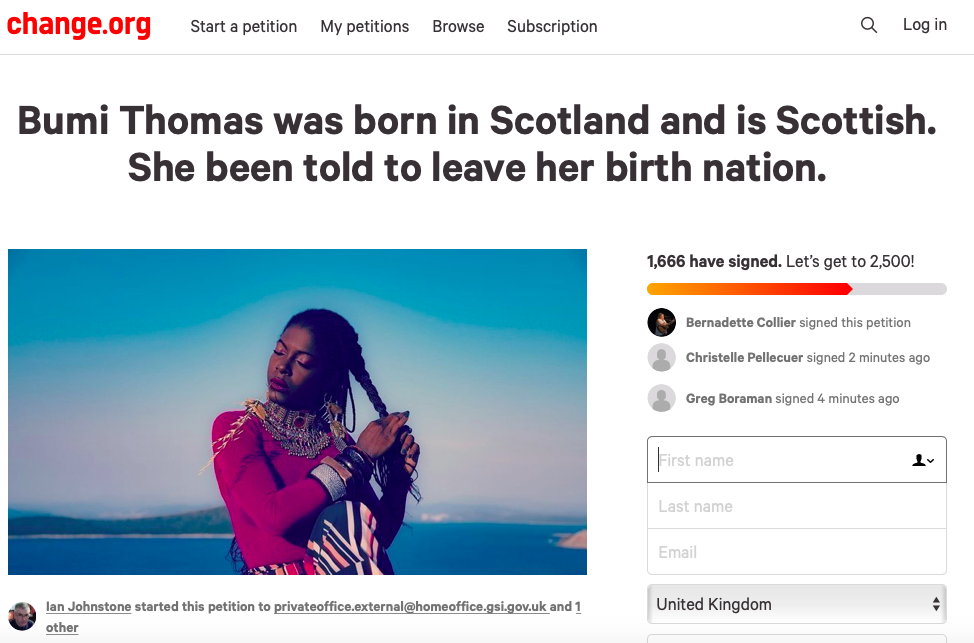 Thomas’ parents arrived in the UK at the tail end of the Windrush Generation, who came from British ex-colonies after the second world war

A change.org petition has been launched calling on the Home Office to reverse plans to deport Bumi Thomas, Glasgow born Jazz artist, who has been told she has to leave the country within two weeks.

On Monday the Daily Record reported that Thomas, the daughter of Nigerian parents who arrived at the end of the Windrush generation, had received a Home Office letter giving her 14 days to leave the country.

Thomas was born in Glasgow in June 1983, shortly after a change in the law through the British Nationality Act which meant that the children of immigrants from former British colonies now had to be registered. Previously citizenship was automatic. Thomas’ parents were unaware of the law change at the time, and she then went on to live in Nigeria for 15 years between the age of 3 and 18.

Thomas, who now lives in London, told the Daily Record: “I had a National Insurance number, I had my birth certificate, I’d got a driving licence, a bank account, I went to college. I believe I am British.”

The Home Office letter stated that Thomas’ right to remain, which she was granted 10 years ago after applying for a British passport, was now invalid after splitting from her British partner. She has appealed the decision.

The petition, launched on Tuesday [26 June], states: “Bumi Thomas is a Jazz artist born in Glasgow in 1983. Scotland is her birth nation. She is Scottish. The UK authorities deem it appropriate to seek her deportation within 14 days. This is not acceptable by fellow Scots. I ask you all – Scots, English, Irish and Welsh, and all decent humanitarians to oppose this injustice instantly by signing this petition.”

Thomas has also set-up a fundraising appeal for her legal fees in fighting the decision. After reaching its initial two fundraising targets, the fundraiser has been extended to create “spaces to interrogate the legality of displacement”.

READ MORE: ‘The human cost of this is impossible to describe’: Kweku Adoboli speaks out after deportation

“I have decided to open the threshold to generate more  awareness,  creating spaces to interrogate the legality of displacement , the psychological consequences and trauma caused by institutional  hostility in response to migration and immigration in Britain. We have reached two amazing targets in a very short space of time,  yet the struggle continues… Let’s raise more funds and establish a precedent for long lasting change and positive redirection.” Thomas wrote.

A Home Office spokesperson said: “All immigration applications are considered on their individual merits and on the basis of the evidence available.”

The Windrush generation were immigrants to the UK from CommonWealth countries from 1948 onwards. In April last year The Guardian revealed in April last year that hundreds of the Windrush Generation, many who had been living in the UK for 50 years or more, were being denied access to public services, lost their jobs or been deported as a result of immigration laws introduced by Theresa May when she was Home Secretary under the 2010-2015 Tory-Liberal coalition government which sought to remove immigrants who had not been given the right to remain. Amber Rudd resigned as Home Secretary in wake of the Windrush Scandal.