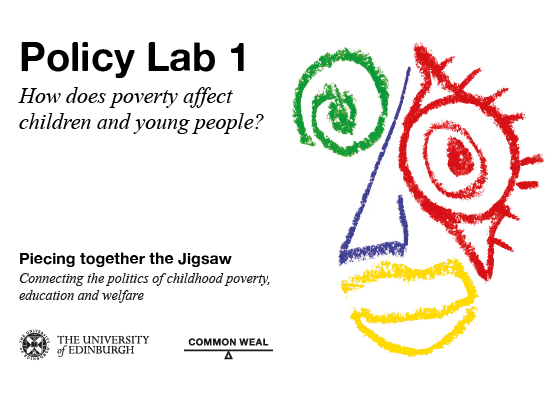 The Common Weal and Edinburgh University project ‘Piecing Together the Jigsaw’ kicks off Wednesday 21 September with a policy lab based on the question ‘how does poverty affect children and young people?’ To inform the discussion, this blog – an extract from education experts Terry Wrigley and John Smyth’s book ‘Living on the Edge’ – looks at the real experience of growing up in poverty

CHILDREN are at greater risk of experiencing poverty than the population as a whole. More than half of children living in poverty have at least one parent in employment, whilst half of all single-parent families are affected.

In many cases, children still experience absolute poverty. This can take the form of inadequate nutrition, damp housing, clothes that do not fit, or shoes with holes in them. Many also face the trauma of having to move house and school as a result of poverty. However, there are also less obvious and more widespread effects of family poverty, which have a deep impact on relationships, confidence, and aspirations.

Many of the issues affecting adults also affect children, but it is important to recognize the differences and attend to the limited research designed to hear children’s voices. Stigma can be particularly damaging to young people while they are developing identities, and children may need special skills to negotiate the hazards of more troubled neighborhoods. There has been too great a tendency to see children in poverty stereotypically, either as victims or as villains without looking at and listening to their experiences.

Friendships were seen as protective, particularly by boys, because without friends they felt especially vulnerable to bullying and exclusion. Fears of loneliness and social isolation were very real, and some children were clearly isolated. This is an area in which children struggled particularly hard to maintain an acceptable level of social involvement. Lack of financial resources to participate in shared social events with friends, restricted access to transport, the cost of transport, lack of space and an inability to be reciprocal, are all factors identified as damaging to children and young people from low-income families’ social viability. For many children, friendships made at school are valued but harder to sustain beyond the confines of school itself. (2002, p. 133)

This also affects learning. As Ridge points out, school is seen as an opportunity to meet friends, but it is also a source of bullying. Poorer children are unlikely to be able to take advantage of the opportunity schools should provide of meeting a cross-section of children and developing wider social networks (p. 133).

“Given what we know about the importance of developing self-esteem for successful learning, we need to recognize the ways in which children are “learning to be poor” by restricting their behavior and aspirations.”

Given what we know about the importance of developing self-esteem for successful learning, we need to recognize the ways in which children are “learning to be poor” by restricting their behavior and aspirations. Parents try to protect their children from the worst effects of poverty, but Ridge’s research also finds children and young people “struggling to protect their parents from seeing the social and emotional costs of childhood poverty on their lives” (p. 140). For example, they moderate their requests, deny their needs and wants, and self-exclude from school trips:

At that time when we didn’t have no money, yeah, because it was real hard to just do anything ’cos all our mates would be doing everything and we’d think—“oh I want to do that.” We’d try and ask mum, but then we’d think so, because what if she says, “well look I’ve only got a bit of money,” then we’d feel guilty for asking, so we didn’t ask her. (Ridge, 2006, p. 26)

Thus, social exclusion has a particular meaning for children. Neoliberal government policies are framed in terms of the longer-term economic impact of child poverty—children as future human capital—but show little concern for how “children experience the realities of poverty and social exclusion in the immediacy of childhood” (Ridge 2002, p. 144).

“It appears that government policy connects to economic realities one-sidedly in terms of future contributions as an employee, but not in terms of the impact of consumerism and its impact on children’s lives.”

It appears that government policy connects to economic realities one-sidedly in terms of future contributions as an employee, but not in terms of the impact of consumerism and its impact on children’s lives. Ridge’s (2002) fourth chapter is full of eloquent testimonies by children:

If they, like, have clothes that they had for quite a while and they’ve out of it, and be, like, sort of too short for them and all, then people call them tramps and smelly and all that. (Cally, 14 years, two-parent family)

Weekends and school holidays can be a particularly difficult time: “Couldn’t do nothing on the weekends, just stayed in, couldn’t go out with my friends and go to the shop or anything like that, so . . . bit boring” (Ridge 2006, p. 26).

Although it is problematic to exaggerate negative descriptions of poorer neighborhoods, we must recognize the risks that children feel and experience, and their potential impact on confidence and self-esteem. Malcolm Hill and colleagues (2006) explore this through interviews with 8-14 year olds, and criticise those who make bland statements about the need for ‘greater resilience’ without understanding how children learn to deal with their experiences and environments. Children develop a strong sense of dangerous territory:

Children described the borders between different zones, such as a road separating different housing schemes. . .  If they crossed the border into an area they did not belong to, they risked being attacked. . .  Besides territories of residence, gangs or groups of young people were sometimes seen as controlling certain public spaces at particular times. (Hill et al., 2006, p. 43)

Quoting some of the young people as evidence of the impact on confidence and identity:

I have learned to keep my head down, so I don’t really get picked on ’cause I am just a person walking and I don’t dress differently. I just dress in my school uniform. (12-year-old boy)

Young people learn to move about in a group, to become safer, but adults often see this as threatening – a group perceived as a gang of potential troublemakers. The children interviewed “described adult neighbors who shouted at them for making a noise, walking on the grass, playing games or seeking to retrieve a football” (p. 43). Children and young people are often demonized not only by the media but by adults who take on the roles of gatekeepers of private or public spaces.

If you want to find out more about Piecing Together the Jigsaw or if you want to attend the Policy Lab on 21 September email Aedan@common.scot