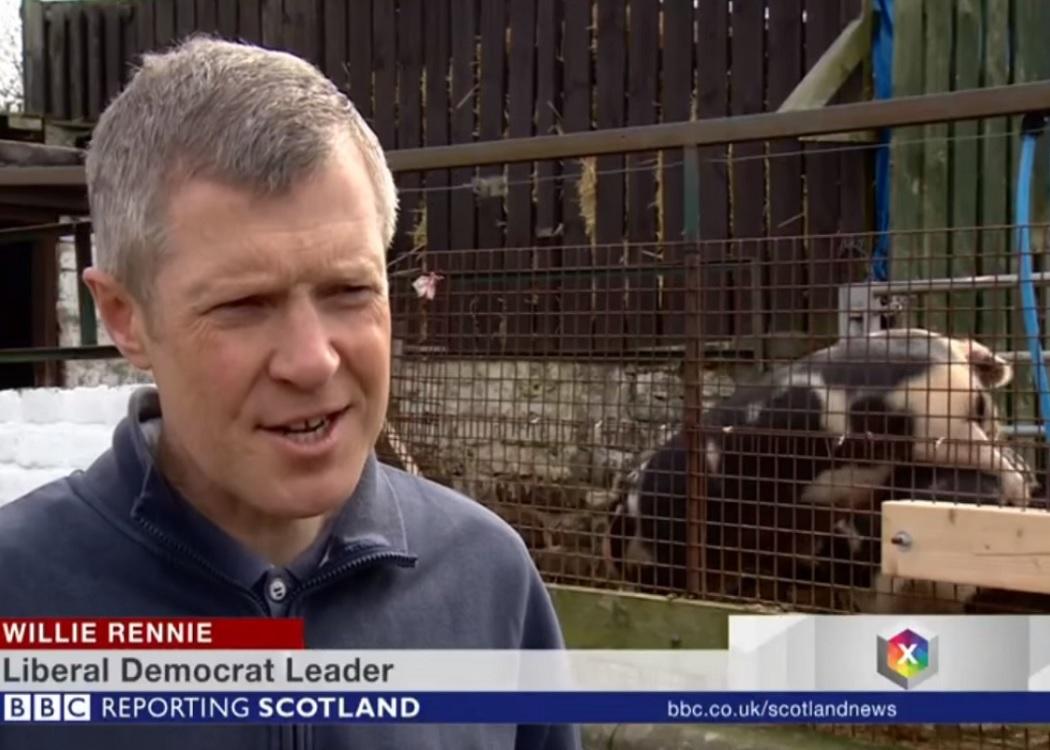 IT’S difficult to imagine Margaret Thatcher riding a Buffalo, Harold Wilson having to deal with internet trolls or Winston Churchill discussing policy with Gary Tank Commander, but these are all of the things Scottish politicians have been up to in the run up to the election on 5 May.

With the election just a week away and each party making its final dash for the finish line it’s easy to get wrapped up in the serious and consequential world of politics, so CommonSpace has decided to round up some of the funniest and most ridiculous moments of the campaign trail.

No-one was more excited than Scottish Lib Dem leader Willie Rennie’s policy on vocational training than these two exhibitionists caught in the act during an interview.

Ironically, Rennie said in the interview: “We like to send a pictorial message about what we’re asking for,” oblivious to the lovemaking session in the background.

Embarrassingly this was the second time pigs stole the spotlight from a politician this year. It’s good to see passion in politics, right?

Here’s Ruth Davidson enjoying a seat, on a Buffalo, as you do. Davidson, Leader of the Scottish Conservatives, never misses a photo opp, even if it does mean sitting on a Buffalo for no apparent reason.

David Coburn on Periscope – can you hear us?

Viewers got the better of Ukip MEP David Coburn as he attempted to broadcast himself live in protest at not being invited onto a live leaders’ debate, using Periscope.

Hilariously, Coburn is knocked of his stride by pranksters claiming they can’t hear him despite the sound working perfectly. Obviously not adept with technology, Coburn’s address was turned into a farce.

He can be heard saying: “I think we’re having trouble with the gremlins again,” as the online trolls disrupt his broadcast.

BBC comedy character Gary Tank Commander interviewed all the party leaders in a light hearted one on one interview. Forcing Nicola Sturgeon to say “there is nothing in my manifesto to introduce a subsidiary on cheesy pasta”, and having Willie Rennie heal his leg using the “power of the Lib Dems” led to a few good laughs at the expense of the politicians.

The tank commander, for better or for worse, gave us a chance to see a different side of the candidates.

Bernard Ponsonby vs David Coburn – you couldn’t make it up

During the interview on Scotland Tonight’s election special Ponnsonby relentlessly quizzed Ukip politician Coburn on his sources. Ponsonby accused Coburn of making things up in this PR nightmare.

Unable to substantiate any of the claims he was making, Coburn was ill prepared for the wrath of Ponsonby.

It seems Willie Rennie will do anything to save the planet, and here he is gliding over Glentress Forest to discuss the challenges of meeting green emission targets.

The politician made use of the facilities at Go Ape by having a shot on the UK’s biggest zip wire.
Rennie- zipwire picture

Although it’s nothing to do with the Scottish election campaign, how could we leave out one of the most controversial and comical events to grace UK politics in recent weeks?

Dennis Skinner, fiery Labour MP, was removed from the House of Commons earlier this month for repeatedly referring to the prime minister as ‘Dodgy Dave’.

And we couldn’t help but cast our minds back to last year, when Scottish politics’ very own Dennis Skinner equivalent, Scottish Labour’s James Kelly, was removed from the Scottish Parliament after a stand-up protest. Any excuse to post this again.