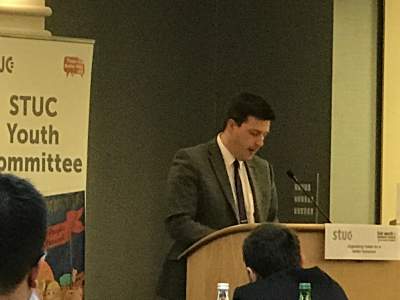 THE STUC Youth Committee held its annual conference in Clydebank at the weekend, where there was lots of discussion about better conditions for young workers.

In his speech to the conference, Scottish Government minister Jamie Hepburn discussed what was on the agenda for the youth workers conference, but also he discussed fair work for young people.

CommonSpace reporter David Thomson managed to speak to Hepburn about the issues raised in his speech, and whether EU nationals should be allowed to stay in Scotland once the Brexit deal has been negotiated.

Read more of ourcoverage of the STUC Youth Conference: