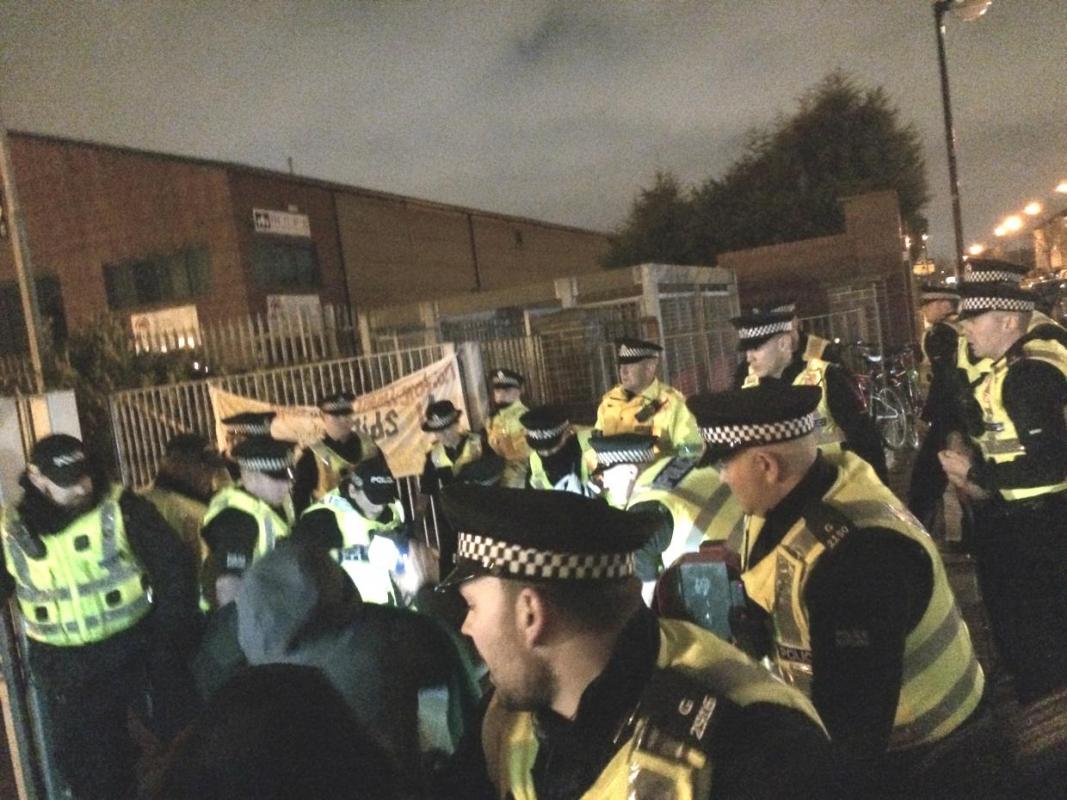 POLICE DOGS and around 30 officers were used to break up a blockade in Glasgow last night, to enable the removal from Scotland of an LGBT asylum seeker and her young son.

Dogs were deployed against a peaceful protest in Glasgow as officers from Police Scotland broke up the blockade of 30 protestors with around 30 officers, in an move which the protestors described as “extremely violent” and “unprecedented”.

Refugee rights campaigners blocked the entrance to the Border and Immigration Agency in Brand Street for around four hours yesterday [Monday 21 March] after discovering that LGBT activist and asylum seeker Beverly Vaanda Kanjii, 45, and her 14-year-old son had been arrested in a dawn raide at their Bridgeton home earlier that day.

When police reinforcements were brought in at 8pm, including two police dog handlers from the public order unit, those sitting at the gate repeatedly told officers that their hands were superglued together.

During protests it is standard practice for police to bring in a specialist team to ensure no injuries occured when people have used superglue or locks. In this instance, however, officers pulled glued-together protestors apart in order to break the blockade, as can be seen in our video.

Phoebe Amis, 26, from Glasgow, was one of those sitting at the gates. She said: “There were a lot of us superglued together. The police pulled us apart thought they had been told we were superglued, they wrenched our hands apart. We told them we were superglued. Everyone was shouting this.”

Another woman involved in the incident, who did not wish to be named, told CommonSpace: “I informed the police officer that I was 8 and a half months pregnant and he continued to push me in the small of my back. He said that he’d heard me and that he was aware that I was pregnant. But he just kept pushing me. His number was 628. He was the driver of the big van. He seemed like a riot cop.”

Asked by CommonSpace why dogs were brought in and no specialist team was deployed, an officer at the scene replied that the grounds were “obstruction of emergency workers and their duties”.

Police had argued that Kanjii, who had been kept with her son at Brand Street since their arrest around 8am that morning, required medical attention and therefore protestors must move to allow emergency vehicle access. Kanjii’s friends and her Scottish partner asked to speak to Kanjii to establish whether or not she wanted to be removed in an ambulance, but the Home Office refused to allow access.

Kanjii alleges that she was assualted by UK security officials during her arrest.

Kanjii is originally from Namibia and says she was persecuted in her home country of Namibia for her sexuality, and faced physical violence and forced marriage there. As is common , the Home Office told the 45-year-old it would be safe for her to return if she moved to a different part of Namibia.

Police Scotland officers were present at the dawn raid alongside UK ‘immigration enforcement officers’, according to an eyewitness. Kanjii alleges that officers pinned her to the floor and hit her. Inspector Rogers from Helen Street police station told protestors last night that Kanjii and her son would be removed to one of the UK’s privately-run immigration detention centres to await her deportation. The whereabouts of Kanjii and her son are not currently known.