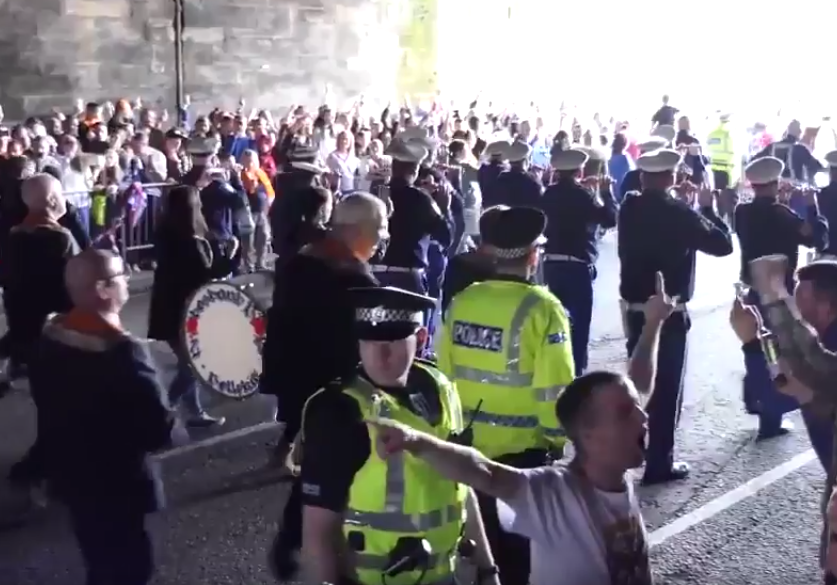 Former CommonSpace journalist Liam O’Hare captured video footage of spectators singing the ‘Famine Song’ which calls for Scots of Irish descent to return to Ireland. Orange bands were playing the tune to the song during the singing.

CommonSpace contacted Police Scotland about the video, which shows officers at the scene but not taking action over the singing.

Speaking to CommonSpace, Chief Superintendent Brian McInulty said: “Saturday’s police operation focused on the safety of the public during the parade.

“Police Scotland, however, operates a zero tolerance policy when it comes to any form of sectarian abuse and will fully investigate any incidents brought to their attention.”

In 2009 the Famine song was ruled to be racist by the Scottish Justiciary Appeal Court.

Easy to laugh at the sheer absurdity of all of this but the sanctioned and approved anti-Irish racism on display here needs highlighted. pic.twitter.com/5gmmTHmqim

Football fan William Walls was convicted of breach of the peace, aggravated by religious and racial prejudice in 2008, and his conviction was upheld by Lord Carloway because the song calls on people of Irish descent to “leave the country because of their racial origin”.

The song lyrics state: “The famine is over, so why don’t you go home.”

A million people died in the Irish Great Famine of the 1840s, and a million more emigrated, some to Scotland. The famine is blamed by some historians on the mismangement and underdevelopment of Ireland by British governments.

Eight people were arrested during the parade for minor drinking and disorder offences at the march to commemorate the 1690 Battle of the Boyne.

Speaking to CommonSpace, Robert McLean, executive officer of the Grand Orange Lodge said: “On Saturday following the parade the police reported no major incidents to us, no cause for concern.”

Questioned on whether it was acceptable for bands to play the tunes to songs that traditionally have sectarian lyrics sung along with them, McLean said: “The tune itself isn’t a problem. It’s an old 60s tune.”