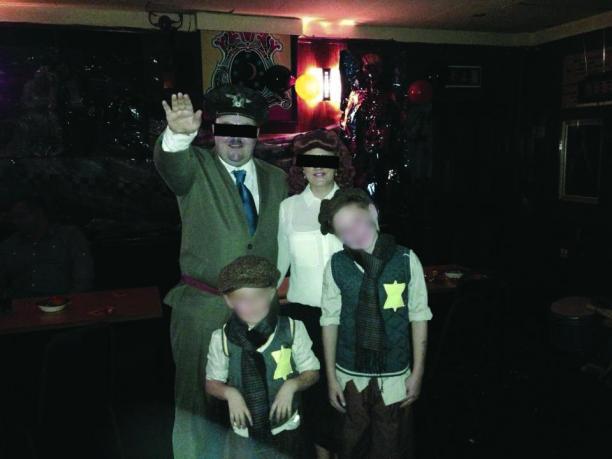 POLICE SCOTLAND is investigating an officer after it was alleged they refused to take a formal complaint about pictures of a Halloween party held in an Orange Lodge hall in Airdrie.

CommonSpace revealed two weeks ago that Police Scotland had dropped the investigation into the pictures – which depicted Holocaust victims and child abuse at a Halloween party – claiming the force hadn’t received any complaints about them.

But it was revealed this weekend in the Sunday Herald that one woman who called to make a formal complaint as she believed the pictures to constitute a hate crime was reportedly told she was “easily offended”, “over-sensitive” and that “people can dress up in whatever they want” by the officer who is now under investigation.

“I didn’t hear anything back so I called them again on Saturday, 26 August and spoke to an officer who was just so offensive it was unbelievable.” Complainer

The woman was also asked if she wanted to complain about Hibernian manager Neil Lennon – an Irishman who has been under persistent sectarian attacks during his time in Scotland.

In relation to the pictures of the Halloween party, a Police Scotland spokesperson said: “We can confirm that a complaint has been received in respect of this and an enquiry is currently ongoing, therefor it would be inappropriate to comment further.”

The woman made the complaint after snaps, revealed by the Sunday Herald,  of the party in 2013 and 2011 showed one partygoer dressed as Hitler and a woman accompanying him dressed as Eva Braun, with two children dressed as Holocaust victims. Another reveller was dressed in a costume depicting the hanging of the Pope and others showed attendees “blacked up”.

The complainer called Police Scotland on 16 July, but claimed to have heard nothing back from them before deciding to call back at the end of last month. She said: “I didn’t hear anything back so I called them again on Saturday, 26 August and spoke to an officer who was just so offensive it was unbelievable.”

“The police officer then said if I want to talk about offensive behaviour I should instead discuss Neil Lennon.” Complainer

She claims the officer she spoke to told her he had 20 years’ experience. She said: “The police officer then said if I want to talk about offensive behaviour I should instead discuss Neil Lennon.”

On 12 August, Hibernian manager Lennon cupped his hands and gestured towards Rangers fans when his team scored their first goal during a 3-2 win at Ibrox stadium.

The complainer said: “I said I had no interest in discussing Neil Lennon. I then reiterated that I thought the behaviour of people at the fancy dress parties constituted a hate crime but he basically refused to take the complaint.”

When CommonSpace contacted Police Scotland on 22 August about the initial investigation into the Halloween pictures, a spokesperson said: “This matter has been investigated by Police Scotland and whilst it is clear that the posts could be regarded as inappropriate and distasteful, no offences have been established at this time.

“Police Scotland has not received any complaints in relation to the content of the article.

“Police Scotland takes all reports of hate incidents seriously and will investigate such reports appropriately and proportionately.”

The Grand Orange Lodge of Scotland refused to comment.