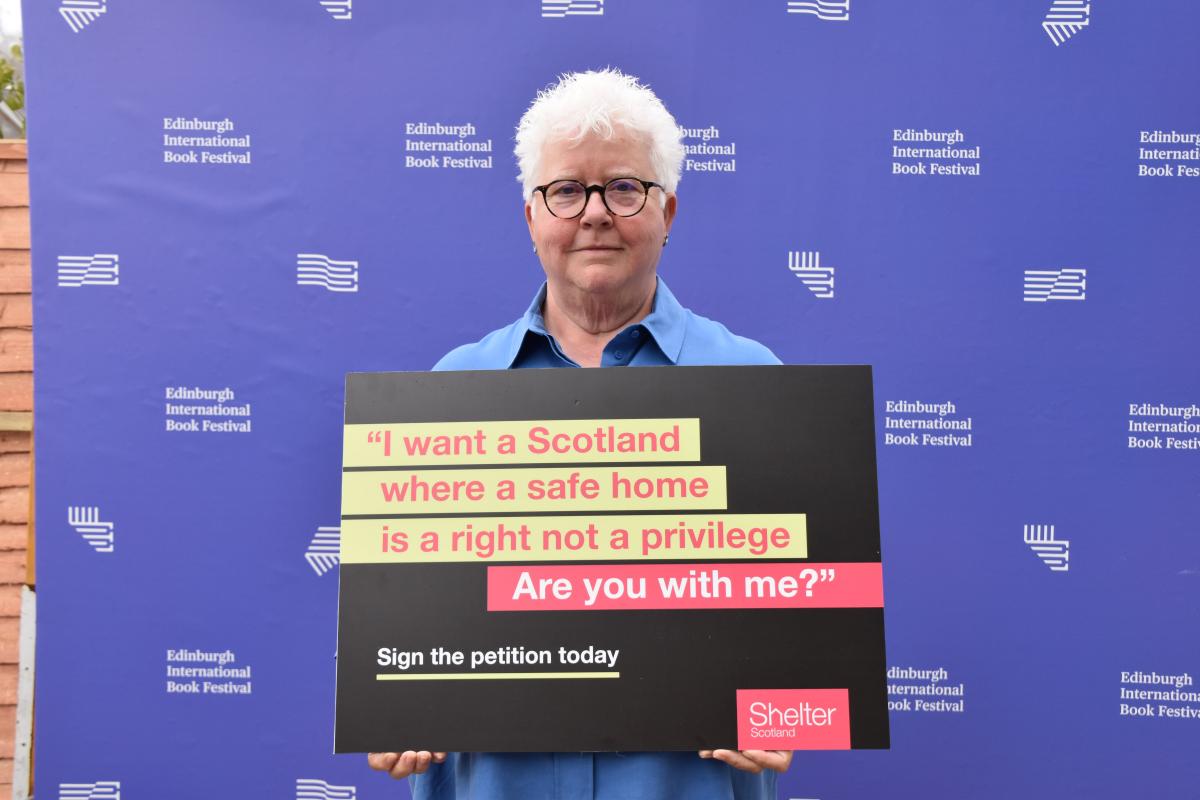 14,000 children in Scotland are homeless

SHELTER SCOTLAND have launched a new campaign to secure the legal right to a decent home, after a poll found 88 per cent of Scots back the idea.

Launched by crime writer Val McDermid on Tuesday [27 August], the campaign will seek to ensure that new human rights legislation expected in the Scottish Parliament in wake of Brexit will include a water-tight legal right to housing.

“Home is a place where you’re safe to be yourself,” McDermid said. “Where you can relax, where you can express yourself and where you don’t feel under threat. Too many people don’t have that privilege. That’s why I’m backing Shelter Scotland’s campaign.”

The campaign launch came after research conducted by YouGov, which showed that 88 per cent of people surveyed agreed that everyone in Scotland should have a legal right to a safe, secure and affordable home and that 76 per cent support a new law being created in Scotland for adequate housing for everyone in the country. The research also found that 78 per cent support the homelessness charity campaigning for stronger human rights in relation to housing.

While housing already is a human right, a briefing by Shelter on the subject found that “there is a gap between this technical right and what is protected under domestic law”. The briefing argued for a Bill which could overcome “Scotland’s tangled web of housing rights” by incorporating the right to adequate housing into Scots law so that it is “enforceable in court”.

There’s also an additional challenge, Shelter found, of a lack of knowledge among the public about their housing rights and lack of enforcement by local authorities, a problem that has grown as Councils have seen budgets hit in recent times.

Last week, Shelter Scotland protested outside Glasgow City Council, threatening legal action against the SNP-run local authority for the 3365 instances of people being turned down for temporary accommodation over 2018/19, which is in breach of the Housing Scotland Act.

Edinburgh City Council has also been criticised for the number of homeless people living in inadequate temporary accommodation for lengthy periods of time, such as B&B’s.

In December last year, First Minister Nicola Sturgeon’s advisory group on human rights published its recommendations, proposing an Act of the Scottish Parliament which would partly fill the “significant gap in the protection of rights in Scotland” once Britain leaves the EU. Those recommendations included a right “to adequate housing”.

Citing the proposals for human rights legislation including housing, Shelter said this was “a major opportunity”.

Launching the campaign, Graeme Brown, Director of Shelter Scotland, said: “Too many people in Scotland don’t have access to the basic right of a decent and affordable home – which is simply wrong in the 21st century in one of the world’s wealthiest countries. There are more than 14,000 homeless children currently in Scotland and nearly 11,000 households in temporary accommodation. We also have rising numbers of people sleeping rough across the country. The evidence is clear – people’s rights to a home need to be significantly strengthened.

“And our research shows that the people of Scotland support changes to give everyone the right to a decent home.

“Through this campaign we want the people of Scotland to know that a good home is their right – not a privilege – and it should be law. We also want them to feel a sense of injustice that so many people don’t have access to this basic need.”