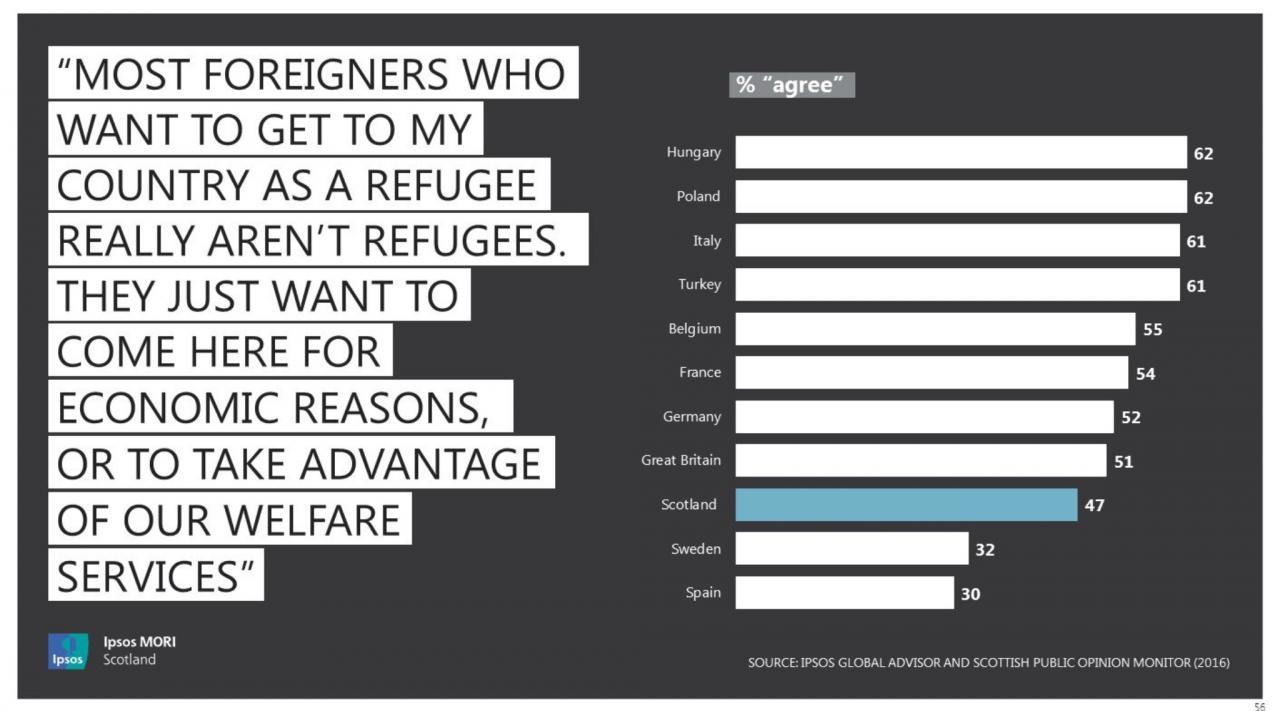 ACCORDING to a new set of polls by IPSO MORI, 47 per cent of Scots are sceptical of the reasons for refugees settling in Scotland and have some concerns over economic migration.

However, in the same set of polls 60 per cent of Scots asked said that they felt Scotland had deal well with immigration compared to only 38 per cent thinking the UK as a whole had done well and 36 per cent for the European Union (EU).

The polling agency first revealed the figures at an event in the Scottish Parliament called Scotland Challenges, that focused on the research concerns of 1000 people on a range of issues over the term of the parliament.

57 per cent of Scots polled stated that they were confident that refugees will be integrated successfully into wider society.

Mark Diffley, director of Ipso MORI, who conducted the research spoke generally about the what the numbers said about the challenges facing policy makers and the public.

He said: "If we want to live in a participatory democracy, we need to pay attention to what people are telling us.

"The recent and ongoing refugee crisis is an international issue with local impact. Our new data gives a mixed picture of attitudes in Scotland.

"There is a clear felling that Scotland has responded to the crisis better than the UK and the EU and that refugees will successfully integrate here. There is however some scepticism about the motivations of some refugees and the issue of potential terrorists entering the UK as refugees."

47 per cent agreed with the statement, "most refugees who want to get to my country aren't really refugees. They just want to come over here for economics reasons or to take advantage of our welfare services."

"The recent and ongoing refugee crisis is an international issue with local impact and our new data gives a mixed picture of attitudes in Scotland." Mark Diffley

However, of the respondents 72 per cent disagreed that "we must close our borders to refugees entirely" which is among the lowest of the countries included.

Additionaly the sentiment summed up by the 47 per cent stat is more associated with those over the age of 55 in Ispo’s data, as well as being more prevelant in deprived communities.

The figures still show Scotland has a better view of immigration and refuge than a majority of nations in Europe as a whole, with 51 per cent of people in the UK sceptical of refugees' reasons for arrival, 52 per cent of Germans and 62 per cent of Hungarians.

Only Sweden and Spain had lower percentages than Scotland when the question on refugees and general immigration was asked.

57 per cent of Scots polled stated that they were confident that refugees will be integrated successfully into wider society, compared to 40 per cent in the reast of the UK.

"There is a clear felling that Scotland has responded to the crisis better than the UK and the EU and that refugees will successfully integrate here." Mark Diffley

In September the arrival of 120 refugees in Scotland meant that the overall number of Syrian refugees rose to 1,000 meaning that a third of all the UK’s EU allocation have settled in Scotland.

The Scottish Government, local council group Cosla and education group, the Welcoming recognised the landmark a year since public outrage over the crisis led to demands for greater political action.