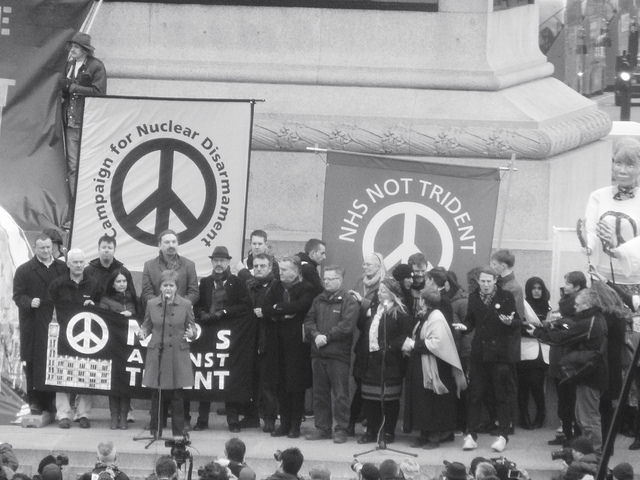 A MAJORITY of Scots believe that the decision over whether nuclear weapons can be based in Scotland should fall to the Scottish Government.

An extensive new BBC survey, conducted by YouGov, of 1025 Scottish adults has shown that 47 per cent support the Scottish Government having the final say over where the UK’s controversial nuclear deterrent is based, as opposed to the 33 per cent who support the matter remaining in the hands of the UK Government.

A further nine per cent believed that the decision should be made by local councils, while the remaining 11 per cent stated they were ‘not sure’.

At present, the UK nuclear weapons system Trident is based at  the Clyde Naval Base in the west of Scotland, 25 miles from Glasgow, and has been a focal point for anti-nuclear activism since its establishment in 1980.

The SNP has been consistently opposed to nuclear weapons, with First Minister Nicola Sturgeon declaring prior to the 2015 General Election: “We will never vote for the renewal of Trident.”

This opposition is shared by the Scottish Greens and Scottish Labour, which voted to scrap the nuclear deterrent in 2015. However, the UK Labour party officially supports Trident, despite UK Labour leader Jeremy Corbyn’s outspoken opposition to nuclear weapons.

While a majority of Scottish MPs voting against the renewal of Trident in 2007, they were outvoted by a majority of English, Welsh and Northern Irish MPs, who triumphed by 409 votes to 161.

In November 2017, Nicola Sturgeon signed a parliamentary pledge drafted by the International Campaign to Abolish Nuclear Weapons (ICAN) supporting the Treaty on the Prohibition of Nuclear Weapons, the first legally binding international agreement to comprehensively rid the world of nuclear arms, which was adopted by the United Nations last year.

The BBC survey also revealed that a sense of British identity is weaker in Scotland than in England and Wales.

Only 59 per cent of people in Scotland said they feel strongly British, compared to the 79 per cent who do so in Wales and the 82 per cent England.

By contrast, more than four in five say they feel strongly Scottish, and as many as 61 per cent identify themselves as feeling “very strongly” Scottish.

Commenting on the survey’s findings, political scientist Professor John Curtice said that it was “little wonder that nationalism is relatively strong in Scotland.

“Feeling Scottish is something that most people in Scotland share in common, whereas feeling British or not can be a source of division.”