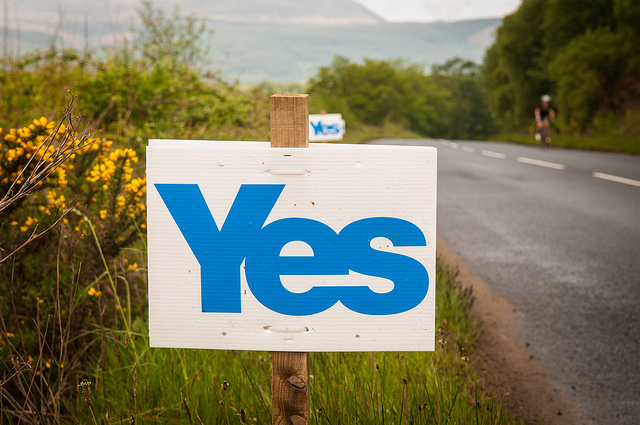 Despite fears over Brexit, new polling shows 46 per cent in favour of an independent Scotland

NEARLY HALF OF SCOTS back an independent Scotland, according to a new Ipsos Mori poll conducted on behalf of STV News.

Echoing the results of the 2014 independence referendum, in which 44.7 per cent of Scottish voters chose Yes, the polling would indicate that support for Scottish independence has not dramatically risen or fallen, but remained solid.

Of those likely to vote, the poll revealed 46 per cent back independence and 50 per cent support the Union, with four per cent uncertain or refusing to answer. Once such undecided voters are removed, the poll puts support for independence at 48 per cent.

However, the same poll suggests the independence movement may be in for the long game, as results showed only 41 per cent would back another referendum within the next three years.

Further results from the poll show that 61 per cent of respondents believe that both the economies of Scotland and the UK will be damaged as a result of Brexit.

Of those seeking an independence referendum within three years, 22 per cent ascribe this to Brexit, while 19 per cent say they already supported a second vote.

The poll also revealed the voting intentions of the polled group, with the SNP standing at 39 per cent as still the most popular Scottish party.

Scottish Labour meanwhile have pulled ahead of the Scottish Conservatives, polling at 26 per cent and 25 per cent respectively. The Scottish Liberal Democrats poll at six per cent, and the Scottish Greens at four per cent.

Commenting on the new findings, Emily Gray, managing director of Ipsos Mori Scotland, said: “Scots are pessimistic about the impact that Brexit will have on the economy, both here in Scotland and across the UK.

“However, Scots’ pessimism about Brexit doesn’t appear to be giving rise to a clamour for a second referendum on Scotland’s constitutional future.

“Meanwhile, the SNP continues to have the highest vote share of any political party in Scotland after almost 11 years in government. While our poll was taken in the same week as Scottish Labour’s spring conference in Dundee, findings do not point to a Scottish Labour ‘bounce’ among voters.”