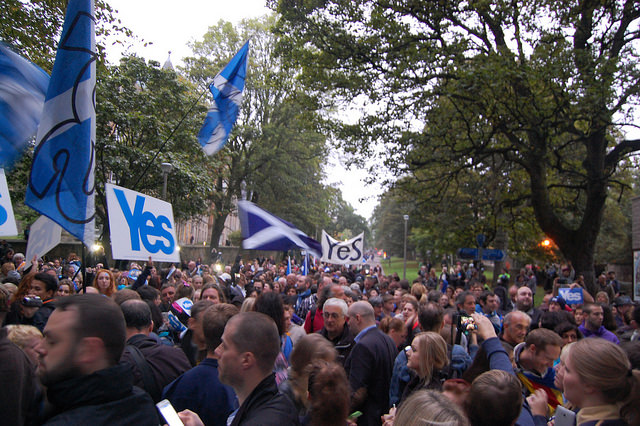 SUPPORT FOR SCOTTISH INDEPENDENCE now stands at 47 per cent, two points above what the Yes vote achieved in 2014, according to the latest Survation poll on the issue.

According to figures accrued by the British polling and market research agency in a poll of 1000 Scots conducted between 27 and 30 November on behalf of the Daily Record newspaper, the Scottish Conservatives are also predicted to return to third place after the next Scottish parliamentary elections, with support for Scottish Labour rising under new leader Richard Leonard.

For Westminster voting intentions, the SNP have remained at 37 per cent, the same position they polled at in June of 2017, while Scottish Labour has risen by one point to 28 per cent, while the Scottish Tories have crashed by four points to 25 per cent.

The new data appears to compliment a poll from September putting support for independence at 46 per cent. This suggests that overall support for Scottish independence remains distinct from the fortunes of the SNP, which has suffered significant electoral setbacks in the 2017 General Election, but remains ahead of both Labour and the Conservatives by large margins.

The most recent Survation poll also found that support for EU membership in Scotland has risen since the EU referendum of 2016, with 68 per cent saying they would vote ‘Remain’ were the referendum to be repeated, up from 62 per cent last year. The poll also indicates that 49 per cent of Scots believe the UK will not make Brexit a success.