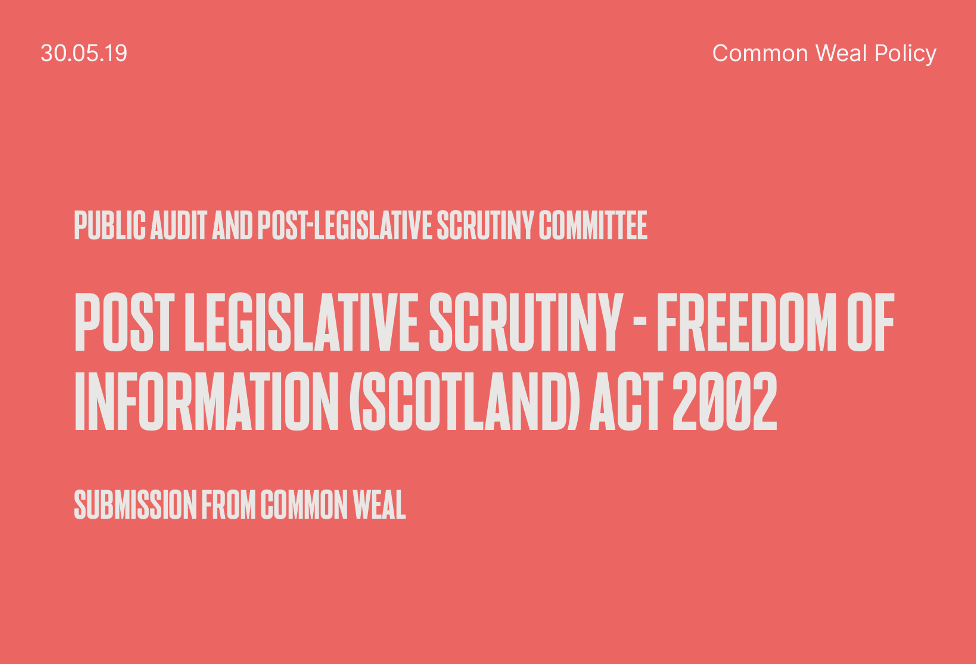 Common Weal has responded to the Public Audit and Post-Legislative Scrutiny Committee’s call for views on the Freedom of Information (Scotland) Act 2002.

You can read the full response to the call for views here.

Common Weal has been a consistent force arguing for greater transparency in government such as with our work which led to the creation of the Lobbying Register and our work to improve Scotland’s provision of statistics. Without adequate public scrutiny, governments cannot be judged on whether or not they are acting in the public good and nor can they be shielded from the corruption inevitable when decisions are made behind closed doors. Some form of Freedom of Information is therefore a vital safeguard for democracy.

This is particularly true in cases where public money is being given to or spent on private companies or when private companies are involved in being contracted to perform work outsourced from the goverment. These companies often operate far less transparently and the tendering processes are often obfuscated under the guise of “commercial confidentiality”.

It is the opinion of Common Weal therefore that the FOI legislation should be extended to cover all users of public money – both public bodies and private companies – and that confidentiality protections should be granted only where nessessary and only on a time-limited basis until the contracts are signed.

However far that FOI legislation is extended or improved, there still remains a fundmental weakness in the legislation. Under the current system, information is generally only disclosed when a specific request is made for it. This means that the transparency of public data is contingent on members of the public being able to ask the right questions at the right time. This is not always possible – particularly in cases where the technical nature of the subject makes forming the appropriate requests difficult or when information about the very existence of the data in question is not public.

The current legislation already states that an objective of the Act is to “encourage the proactive disclosure of information” but Common Weal believes that it is now time to consider a significant strengthening of this requirement. Instead, the concept of FOI requests should be replaced entirely with mandatory proactive disclosure of all information that would ordinarily be disclosed by an FOI request under the current system. This “Glass Wall” approach to transparency would require a comprehensive database where information could be disseminated and may require staff trained to support requests from the public to navigate the archive but it would ensure the highest possible level of transparency and scrutiny in and of our democracy. Once again, this rule should be applied to all users of public money or resources.