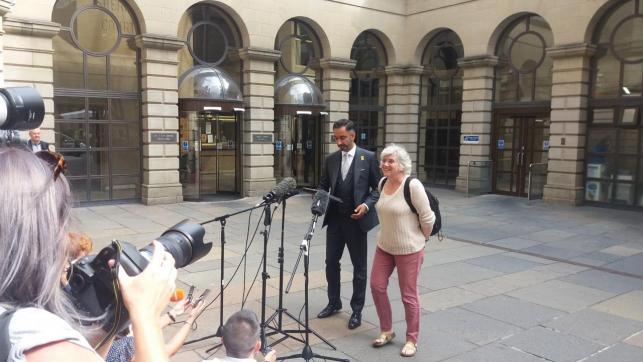 The trial of 12 pro-independence Catalan leaders, which came to an end on Wednesday, was criticised as unfair by Catalonia’s president Quim Torra

THE 12 Catalan independence leaders being tried before the Spanish Supreme Court have been the victims of a “politically motivated ‘show trial’”, says the Scottish lawyer and human rights advocate Aamer Anwar, following the conclusion of the four-month legal proceedings this week.

The dozen politicians and activists tried for their involvement in the 2017 Catalan independence referendum remained defiant at the end of their trial on 13 July, denying the charges brought against them and arguing that the Catalan crisis should be resolved politically, not rather than by the Spanish judiciary.

As thousands of supporters rallied in support of the political prisoners in Barcelona on Wednesday night, watching the closing statements made by the defendants broadcast live on large outdoor screens, the former Catalan vice-president and newly elected MEP Oriol Junqueras – who faces up to 25 years in prison if found guilty – reiterated his defence of Catalonia’s democratic right to decide its own constitutional future, saying: “Casting a vote cannot be considered a crime.”

In a call for dialogue and negotiation, Junqueras added: “The best thing for everyone would be to return the Catalan question to the political domain, from which it should never have left.”

READ MORE: Aamer Anwar speech to Catalonia’s Diada in full: ‘Independence is your cause and you do not walk alone’

Junqueras’ fellow defendants further argued that the trial was being used by the Spanish state to achieve political ends. The former Catalan interior minister Joaquim Forn told the court: “[This trial] is a punishment for the political challenge posed by the holding of the referendum.”

Jordi Sànchez, former Catalan National Assembly president, also stated that preventative imprisonment of the kind he had suffered “is an enormous injustice, not only for me and for the other pro-independence prisoners but in general around Spain.”

The grassroots activist Jordi Cuixart argued that those who hoped the trial who put an end to the aspirations of the Catalan independence leader would fail, saying: “If police violence couldn’t stop thousands of people [voting in the referendum], how can anyone think that a sentence will stop Catalans fighting for their right to self-determination?”

“Self-determination is transcendental,” said Joseph Rull, the former Catalan environment minister. “There will always be more people after us. There are not enough prisons to lock up our desire for freedom.”

“Deciding to decapitate us will not decapitate the independence movement or the desire for independence and self-determination in Catalonia,” added Jordi Turull, former minister to the office of the Catalan presidency and former Catalan government spokesperson.

Speaking to CommonSpace, Aamer Anwar, who provided legal representation for the exiled former Catalan education minister and St Andrews University professor Clara Ponsati during the Spanish authorities’ efforts to extradite her from Scotland on similar charges to the 12 independence leaders, told CommonSpace that no matter what the verdict, “power rests with the Catalan people.”

Anwar commented: “From start to finish as predicted this has been a politically motivated ‘show trial’, now all we have to do is wait for the verdicts. If, as expected, they are all found guilty, it will be seen by the Catalan people as another act of judicial vengeance and humiliation by the Spanish state – a repeat of history which has seen 9 out of 11 Catalan presidents, jailed, exiled or executed.

“It is an indictment of any democracy that men and woman in a democracy can be tried, convicted and imprisoned for exercising the right to vote.” Lawyer Aamer Anwar

“It is an indictment of any democracy that men and woman in a democracy can be tried, convicted and imprisoned for exercising the right to vote.”

Anwar continued: “What is even more shocking has been the abject silence from the European Union and countries which like to consider themselves civilised democracies – had this been Russia, Iran or Zimbabwe then we would have expected a great outcry and calls for boycotts and sanctions. In the end power rests with the Catalan people and what they do will alter the course of history and nothing else.”

Addressing press after the end of the trial’s final stage, Catalan president Quim Torra described the trial as unfair, criticising the imbalance of power between the prosecution and the defendants.

Torra once again praised those who participated in the 2017 referendum, describing “the more than 2 million Catalans who had the courage, the responsibility and the generosity to vote on October 1” in what he described as “Europe’s most important act of civil disobedience.”