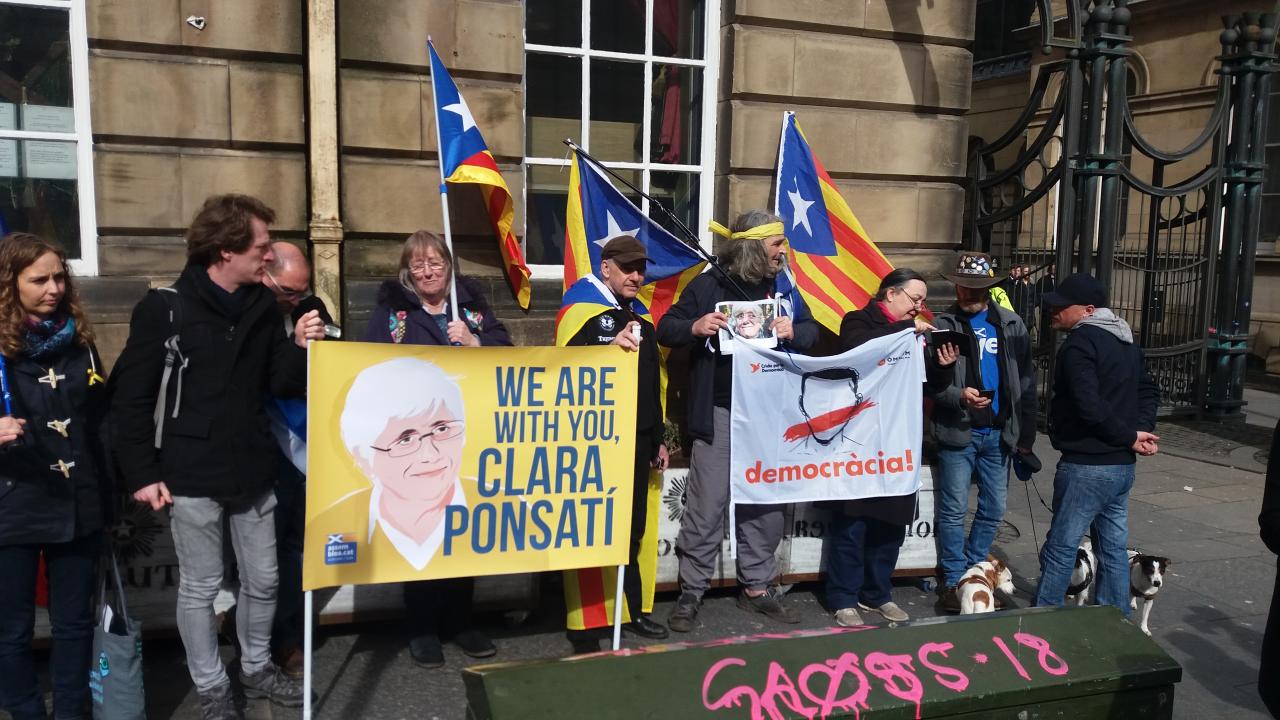 EFFORTS to save former Catalan minister and St Andrews University academic Clara Ponsati from extradition to Spain have received a potential boost, following the dismissal by Belgium of the European Arrest Warrant for three other Catalan politicians.

At a hearing in Brussels on Tuesday, 15 May, it was announced that Belgium had rejected the extradition of deposed Catalan ministers Lluís Puig, Toni Comín and Meritxell Serret, following agreement between both the prosecutor and the defence that the extradition request made by Spain featured “procedural defects” and “irregularities.”

Puig, the former Catalan culture minister, told press that the decision by Belgium could have a “multiplying” effect in the ongoing cases of Ponsati and exiled Catalan president Carles Puigdemont in Germany, both of whom are sought by Spanish authorities for their role in the 2017 Catalan independence referendum on charges of rebellion, sedition and misappropriation of funds.

Also responding to the Belgian decision, Puigdemont commented: “Belgium rejects extraditing Catalan ministers in exile to Spain. This is good news that shows that in Europe rights are guaranteed beyond political opinions.”

“This is good news that shows that in Europe rights are guaranteed beyond political opinions.” Former Catalan president Carles Puigdemont

Puigdemont’s lawyer, Jaume-Alonso Cuevillas, echoed Puig’s interpretation of the decision, saying that it could set a precedent for his client’s case, as the European Arrest Warrant is “exactly the same” and therefore features the same irregularities.

The reported reasoning behind the Belgian decision was that there was no complimentary arrest warrant issued in Spain for the three politicians – a mandatory requirement in order for a European Arrest Warrant to be considered under Belgian jurisdiction.

While the relevant Belgian defence and prosecution teams can appeal the decision, it has been reported that neither will do so; no such avenue of appeal is available to the Spanish Government or legal system.

Responding to the decision this morning, the Spanish Supreme Court condemned the Belgian court’s rejection of the requested extraditions. Pablo Llarena, the judge who issued the arrest warrant on 23 March, accused Belgium of “lack of commitment” in cooperating with Spain.

Following the rejection of his extradition, Meritxell Serret took the opportunity to reiterate the exiled ministers’ demand for “the end of judicialization of politics” and the release of all Catalan political figures currently incarcerated by Spanish authorities.

Clara Ponsati, who was released on bail in March after voluntarily turning herself in to Scottish police in response to her own European Arrest Warrant, appeared at Edinburgh Sheriff Court on Tuesday for a procedural hearing, at which her legal team, led by top Scottish lawyer and noted human rights advocate Aamer Anwar, set out their case.

“In recent days there have been many rumours that the Spanish authorities may attempt to ‘water down’ the seriousness of charges to ones which carry the sentences of 12 to 25 years.

“Whatever the Spanish authorities intend to do, my instructions are to defend Clara against any extradition attempt for a political prosecution.”

Anwar highlighted the fact that Ponsati could face sentences of up to 25 years and eight years respectively if convicted, potentially spending the rest of her natural life in prison.

At the hearing, Ponsati’s legal team lodged draft legal submissions and maintained their argument that the charges facing the academic are “a politically motivated prosecution”.

Anwar said: “To extradite Clara would be unjust, oppressive and incompatible with her human rights. Spain has failed to specify a single act of violence attributable to Clara Ponsati and the allegations she faces are a grotesque distortion of the truth.

“Without the unconditional release of all political prisoners and withdrawal of the European Arrest Warrants there will never be a resolution to the crisis.” Clara Ponsati lawyer Aamer Anwar

“Spanish politicians talk of the rule of law, yet not one Spanish police officer has been prosecuted for their unprovoked attacks on defenceless Catalans at more than 2000 polling stations. We intend to challenge in our courts the independence and impartiality of the Spanish judiciary.

“Throughout Europe, Spain stands accused of abusing the European arrest warrant as a tool of political repression.

“The courts can never be a solution or alternative to political negotiation. Spain today faces its greatest crisis since dark days of General Franco.

“Without the unconditional release of all political prisoners and withdrawal of the European Arrest Warrants there will never be a resolution to the crisis.”

Further preliminary hearings for Ponsati will take place on June 12 and July 5, with a full hearing now scheduled to begin on July 30 for two weeks. Aamer Anwar was unavailable for comment on the Belgian decision at the time of publication.