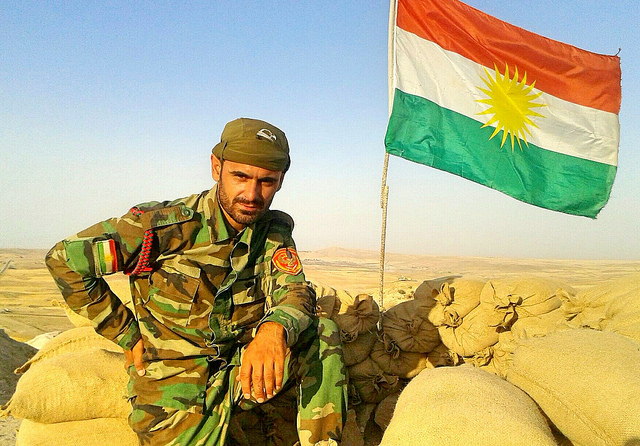 TENSIONS IN IRAQ and the autonomous region of Iraqi Kurdistan are running dangerously high as clashes and democratic stalemate continue between the two Governments and their forces, following a landslide vote for Kurdish independence last month.

The Iraqi Government, supported by its neighbours Turkey and Iran, has been clear since the referendum took place on 25 September – with a 92 per cent vote for independence on a 72.6 per cent turnout – that the results would not be respected.

Earlier this week, President Masoud Barzani of the Kurdish Regional Government called for a ceasefire and offered to “freeze the result of the referendum” in order to allow for an “open dialogue” between the two governments.

However, Iraq’s Prime Minister Haider al-Abdai rejected the proposal, saying: “We won’t accept anything but its cancellation and the respect of the constitution.” On Thursday, Iraqi forces advanced on the Kurdish Region’s military forces, known as the Peshmerga, with clashes reportedly taking place across several villages in Kurdistan.

“There are differing views in the Kurdish community on whether it was right to call the referendum.” Stephen Smellie, Scottish Solidarity with Kurdistan

The vote last month had been delayed by three years after the former Kurdish Regional Government announced a referendum in 2014 – nine years after the Iraqi constitution first recognised the region as autonomous.

While a significant Kurdish minority are based in Syria, Iran and Turkey and have struggled against oppression in all of these regions, Iraq remains the only area in which Kurds have established a stable government in recent years.

In the past, the Kurds in Iraq were subject to extreme persecution under Saddam Hussein, with thousands being killed in chemical attacks. While relations stabilised following Hussein’s demise, matters have been complicated by the rise of Daesh (or ISIS) in Iraq since 2013, which both Iraqi and Kurdish forces have been fighting with US support.

Speaking to CommonSpace, Stephen Smellie of Scottish Solidarity with Kurdistan explained that the situation in Iraq is highly complex. He said: “There are differing views in the Kurdish community on whether it was right to call the referendum and what happened afterwards.

“PUK (Patriotic Union of Kurdistan) supporters blame the governing party KDP (Kurdistan Democratic Party), whilst KDP point to a deal that a faction of the PUK did with Iran which led the PUK to withdraw Peshmerga forces from Kirkuk, making it a lot easier for the Iraqi and Iranian backed forces to take the city and other areas.

“There are now reports of these forces massing on the border of the autonomous Kurdish Region and fears that they will enter the area and seize lands. This would be contrary to the expressed position that the Iraqi government just wanted the Kurds to give up the areas they took, such as Kirkuk, when the Iraqi army fled from ISIS.

“The consequences of such a move would mean a full on war between the Kurds and Iraqi forces. The main winners in such a situation would be ISIS.”

Where to go from here, Smellie said, is not a question on which the Kurds in Iraq are united: “Within the Kurdish Region there are calls for unity; calls for President Barzani to resign and his family to give up power; calls for the Talabani family to resign from the leadership of the PUK; for rallying behind the Kurdistan Regional Government; for a different transitional government and for a mix of these various options – in short, it is not clear what is going to happen.”

Earlier this week, the Scottish Parliamentary Cross Party Group on Kurdistan, which aims to promote understanding of Scotland’s Kurdish community and the wider Kurdish diaspora, met to discuss the circumstances in Iraq.

Scottish Solidarity with Kurdistan was in attendance, and Smellie reported on the discussion: “It was agreed that the UK, Europe and US should all call on the Iraqi government to desist from further military measures, that a war between the Kurds and Iraq would be wrong and aid only ISIS, and that the Kurdish people should be allowed the democratic space to discuss and resolve on the next steps to promote their future.”

Speaking of the organisation’s own position on the situation, Smellie said: “[We] would call for the right of the Kurdish people to self determination to be respected and for negotiations to take place urgently to restore stability and lower tensions, that the ban on flights into the Kurdish area be lifted and for economic pressures threatened by Turkey to be condemned.”

Turkey, which borders part of the Kurdistan region and is in continued conflict with its own Kurdish population, has backed Iraq’s position. Mevlut Cavusoglu, Turkey’s foreign minister, confirmed that the Kurdish offer to freeze the referendum results was “insufficient” and called for a full cancellation.

Immediately following the referendum, Turkish President Tayyip Erdogan threatened to force Kurdistan to u-turn on the vote by blocking their access to food and to oil revenues, and this week offered to re-open a pipeline which would allow the Iraqi Government to bypass the region entirely and export oil directly to Turkey.

Turkey has been ruled against on numerous occasions by the European Court of Human Rights for breaching the human rights of its Kurdish population.