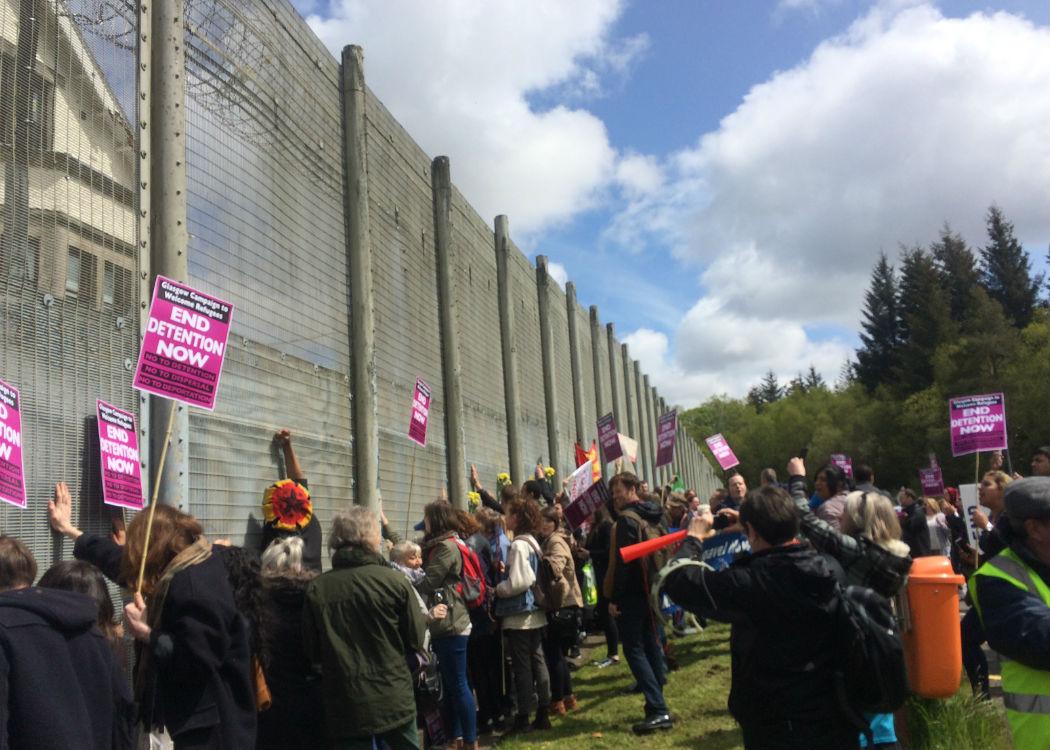 THE TREATMENT of vulnerable asylum seekers at Dungavel detention centre, some who may have been victims of rape and torture, has been criticised in a report by the UK’s chief prison inspector.

Her Majesty’s Inspectorate of Prisons (HMIP) found that vulnerable individuals were being detained in contravention of rules designed to protect vulnerable people from detention.

However, it did state that Dungavel was a “safe place” for detainees.

The report was from a visit made between 9-20 February this year and has only been made available now.

According to the report, in some cases evidence of torture was “compelling but detention had been maintained”.

One reply to a detainee’s report of trauma said “you may have been a victim of torture. However, it has been decided that you will remain in detention”.

Another case is highlighted where a traumatised women, who reported being the victim of rape, was held in detention too long. Despite the centre’s health team saying that the women was “very traumatised”, “unsuitable for detention” and advising that she “should be released”, the woman was transported to Yarl’s Wood detention centre in England.

She was eventually moved back to Dungavel before being released to social services, a total of nine days after the Home Office was alerted to her trauma.

Kate Alexander from Scottish Detainee Visitors said that the report backs up the findings of a parliamentary enquiry into detention.

“We frequently see people who are vulnerable and often their mental health problems are a result of long term detention. We see people in detention deteriorate before our very eyes.

“There are problems at Dungavel, but the key problem remains the system of detention itself.”

The legislation that governs Dungavel, 2001 Detention Centre Rules, requires a report be sent to the Home Office if a person’s physical or mental health is likely be affected by detention, including if they have been tortured.

“You may have been a victim of torture. However, it has been decided that you will remain in detention” Response to Dungavel detainee

According to HMIP, the qualities of these “Rule 35” reports was “variable”.

“Some were very clear, detailed and persuasive, while others were short and lacked diagnostic findings. Two of the 10 reports we looked at had led to release, but in other compelling cases detention had been maintained,” said the report.

The report is also critical of the “unreasonable” length of time that detainees spend in Dungavel.

An Iranian man is reported to have spent over 2 and a half years in the centre and the report blames Home Office delays in processing asylum claims for prolonging periods of detention.

The UK is the only country in the EU which has no cap on how long people can be detained under immigration powers.

In April, the Home Office refused a request from a delegation of political and religious leaders to visit Dungavel detention centre.

This followed a hunger-strike from detainees inside the centre, which was reported on CommonSpace (click here to read more).

The centre is run by American multinational GEO Group which operates prisons in the United States as well as a migrant operations centre in Guantanamo Bay.

The HMIP report is critical of the fact that detainees are transported to and from Dungavel over night and are refused comfort breaks, even on long journeys.

It said that too many detainees were unnecessarily handcuffed during external appointments, with 49 of 50 risk assessments studied leading to the handcuffing.

Meanwhile also documented is the controversial practise of paying detainees only PS1 an hour for work undertaken in detention.

In addition, the vast majority of detainees (67 per cent) said that they had not received any visits from family or friends at the centre.

In a statement, the Home Office said: “Detention and removal are essential parts of effective immigration controls, helping to ensure that those with no right to remain in the UK are returned to their home country if they will not leave voluntarily.

“We take our responsibilities towards detainees’ welfare extremely seriously. That is why the Home Secretary has commissioned an independent review of detainees’ welfare to be conducted by the former prisons ombudsman Stephen Shaw. This is expected to be completed in the autumn.”