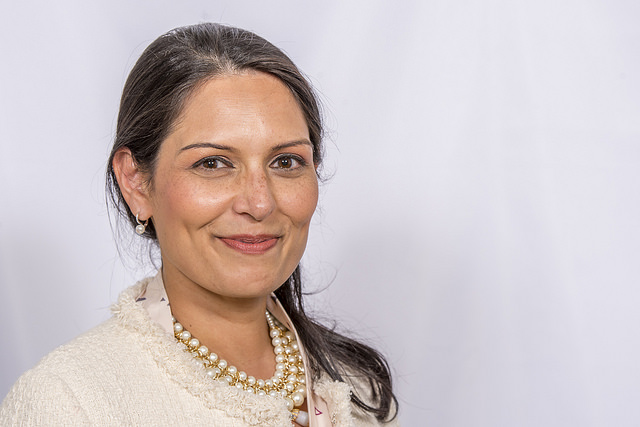 AS NEWS FLOODS IN on International Development Secretary’s Priti Patel’s madcap adventures – or should we say “family holidays” – in Israel, it’s almost as hard to keep track of as the weekly instalments of “which country has Boris Johnson managed to mortally offend now?”.

With former Defence Secretary Michael Fallon out the door last week amid sexual harassment allegations, Secretary of State Damien Green and a number of MPs under investigation, and calls for Johnson to be sacked following public comments on a British woman imprisoned in Iran which may well land her in prison for another five years (thanks Boris, I’ll be sure to make you my one phone call if I ever get arrested), Theresa May might as well replace her pal Lord Sugar on The Apprentice for how often she’ll be saying the words “you’re fired”.

With that in mind it seems only right that we provide a recap of the latest episode of Keeping Up With the Cabinet, starring none other than international woman of mystery, Priti Patel.

So, it was reported late last week that Patel, a strong supporter of Israel and former vice-chair of Conservative Friends of Israel (CFI), had held a series of meetings in Israel this August during what she described as a “family holiday”.

Contrary to normal practice, Patel neglected to tell the Foreign Office about it – even British diplomats in Israel didn’t know the meetings were taking place.

Meanwhile, Patel was accompanied by, one can only assume, her regular holiday buddy Lord Polak, the honorary president of Conservative Friends of Israel (CFI), which is an influential lobbying organisation with access to wealthy party donors.

Indeed, Lord Polak told the BBC that he was on holiday in Israel at the same time as Patel. “It was the summer holidays. I just joined her for a couple of days, some drinks, some dinner, that kind of thing,” he said.

Snaps of the pair in Magaluf last summer to follow.

MPs from the opposition, her own party and even other ministers expressed concern about the revelations, describing it as “freelance foreign policy”, and accusing Patel of attempting to build support among pro-Israeli donors in aid of her own leadership ambitions.

One minister told the BBC: “This is outrageous. She is a Cabinet minister. She just cannot do this. This is about donors and influence.”

The SNP has described the events as a “shambolic episode”, “humiliating” and “utterly extraordinary”.  Labour called it a “complete disregard for the ethics of public service”. The Lib Dems said Patel had “forfeited the respect of colleagues”. The Greens called it “indefensible”.

It’s not hard to imagine the words emblazoned as testimonies on the (probably soon-to-be former) minister’s spin-off movie poster. Patel: Gone Rogue in the Middle East.

Prime Minister Theresa May’s spokesperson responded with a “nothing to see here approach”, confirming with Ron Swanson-level specificity that Patel had “taken the opportunity to meet some people and some organisations”.

Patel was, in a word, raging at the apparent mischaracterisation of her holiday antics and told Boris to sort himself out. Some people like hanging by the beach with a cocktail, some people like visiting the tourist attractions, and others like meeting with the leaders of foreign countries. And what of it!?

“I went out there, I paid for it. And there is nothing else to this. It is quite extraordinary. It is for the Foreign Office to go away and explain themselves.”

By the time Monday came around, it appeared that Patel had endured quite the weekend because her position on the situation had radically changed. In fact, it would seem, her own understanding of the English language was more than a little altered.

The Department for International Development released an official statement on the matter, admitting the minister’s wrongdoing and providing a – supposedly – full list of meetings which had taken place during the August visit.

The statement said:  “In hindsight, I can see how my enthusiasm to engage in this way could be mis-read, and how meetings were set up and reported in a way which did not accord with the usual procedures. I am sorry for this and I apologise for it.”

Ever been interested in press releases, or part of your job to read them or write them? This is a classic… https://t.co/zqkmTaNUvz

If you thought Priti Patel’s family holiday w/ Netanyahu couldnt get more farcical, you haven’t read her apology yet https://t.co/2OQ95mObzd

The statement offered some “clarification” of Patel’s earlier account in which Boris most definitely knew about all this.

Clarifying another comment in which Patel has said “the stuff that is out there is it, as far as I am concerned”, the statement went on: “This quote may be read as implying that the Secretary of State was saying that the meetings that had so far been publicly reported were the only ones which took place on her visit.”

You guessed it: they were not the only meetings which took place. In fact, there were a whole bunch of other meetings.

Among the 12 fun-filled holiday excursions were meetings with Israeli Prime Minister Netanyahu, Yuval Rotem of the Israeli Foreign Ministry, Gilad Erdan – Minister for Public Security, Information and Strategic Affairs, and… you get the idea.

Let’s just hope she packed the iPad for the kids.

Not a “resigning matter”

Patel was given a mere slap on the wrist by Theresa May as a result of the developments – which May apparently learned of as and when they were reported by the BBC, one day after her own meeting with the Israeli Prime Minister.

A spokesperson said on Monday: “The prime minister welcomes the secretary of state’s clarification about her trip to Israel and has accepted her apology for her handling of the matter.

“The prime minister met the secretary of state this morning to remind her of the obligations which exist under the ministerial code.”

However, it was confirmed that the events were not considered a “resigning matter”, adding: “The important point here is that no UK interests were damaged.”

It was then revealed on Tuesday that Patel had discussed the possibility of funnelling money from the UK to the Israel Defence Forces (IDF), as aid to support Syrian refugees arriving in the Golan Heights. The Foreign Office had rejected the proposals because Israel’s occupation of the Golan Heights is illegal.

The same day, it emerged that Patel had also met separately with Israel’s security minister Gilad Erdan and Yuval Rotem, head of the Foreign Ministry, in September – eager as she was to keep the holiday spirit going.

Can you guess who says she didn’t know about any of this? Yes, Prime Minister Theresa May, again.

By the next day, it appeared May had well and truly had it with her unruly cabinet minister – well, one of them anyway – because she told Patel to get on the next flight out of Africa (oh yeah, Patel was in Africa. This time on official business, so we can only guess she was halfway down a flume when she got the PM’s call).

By this time, the Prime Minister’s office admitted they did in fact know about Patel’s September meeting with Yuval Rotem, but denied reports from the Jewish Chronicle that they told Patel to keep it a secret to avoid embarrassing the Foreign Office.

And just to add insult to injury, an Israeli newspaper then reported that Patel had visited a military hospital in the occupied Golan Heights, which is definitely not a thing she should have been doing.

So there’s a good chance that whatever Patel thought she had in store for when she got off that plane is going to be even worse than anticipated.

And just because everyone enjoys a good bit of Schadenfreude, the Twitterverse has been tracking Patel’s flight.

According to media #PritiPatel is on board this flight.https://t.co/3GXUkQw0e3 pic.twitter.com/8uzL9usnRc

We’re at “OJ and the white bronco” stage of the coverage as BBC News now showing Priti Patel’s flight from Kenya on the online flight radar: “You can see its just over Greece at the moment” pic.twitter.com/Xf407P2kRF

She is in the car … …promise we saw her get in – no time for duty free pic.twitter.com/VDKTM3l0LJ

Now back safely (for now) in the UK, Priti Patel is expected to meet with the prime minister later this evening. But based on events so far, May is unlikely to know anything about the meeting by this time tomorrow.